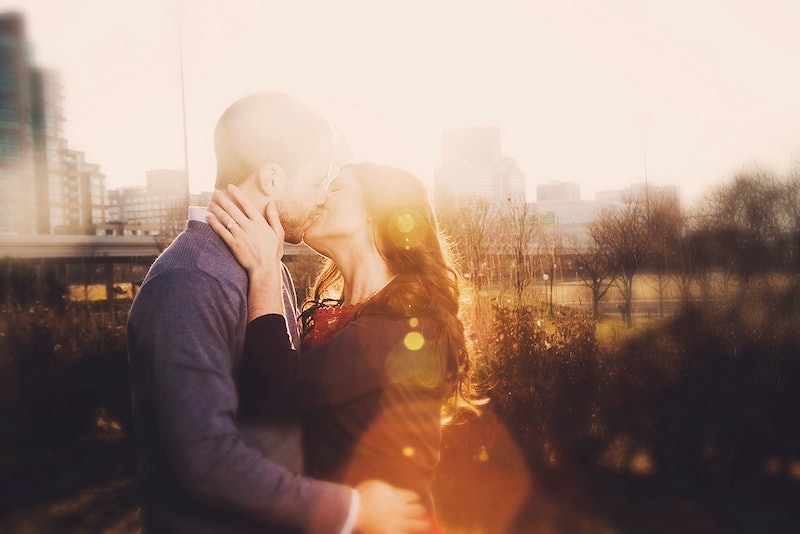 Every single holiday brings a certain expectation when it comes to social media. While Christmas will bring trees, and Arbor Day will bring — well — trees, Valentine's Day will bring the absolute worst on Facebook and Twitter. Prior to social media being a thing, you probably only had to deal with the onslaught of coworkers getting flowers at work. Now? You have to deal with bouquets across the globe. At least with the former, you might be able to enjoy the aroma from your desk, as you casually wonder whether or not you'll get as much as an acknowledgement of the day from your new boyfriend. With the latter? You can choose to "like" it or completely ignore it. And by ignore it, I mean feel a certain sense of jealousy that haunts you throughout the night.

Personally, I was never too into Valentine's Day, but seeing the invasion of presents and romantic gestures given to my long distance acquaintances made me start to care a little more than I should. If I didn't even get a card and a kiss, does that mean that he just doesn't care? Did he give this stuff to his last girlfriend, or is it a habitual pattern? Would it be weird if I asked? If I do get a bouquet, should I join in and snap a picture, to prove that I'm worthy of love? Will it hurt someone else's feelings? God, I hope not.

This year, I'm taking a stand. After all, my own relationship is nobody else's business, and feeding into the Instagram hashtag of #vday will make me feel like a petty follower, instead of a strong and independent leader. While we're on the topic, let's round up all of those posts that'll make you cringe on February 14th.

Not only did they get flowers, but they got chocolates, jewelry, and some poorly made Valentine's bear from CVS! All of this loot is huddled into one brightly lit corner, and you know for a fact that things were arranged 15 different ways before the absolute perfect photo was captured and posted. The caption will read something like, "Isn't boyfriend the best!?!? LUV U! #blessed #vday"

Can I ask a real question here? Does anyone even like those Valentine's Day bears? What happens to the bears after the holiday is over? Do they get discarded, just like the flowers after they've wilted? I'm seriously puzzled. I mean, I like stuffed animals — they've topped my Christmas tree for three years straight — but I have no clue what the heck I'd do with a convenience store Valentine's bear as an adult.

Sure, I like making out. I once hosted a party that, thanks to alcohol, turned into a makeout fest back in college. We even made t-shirts afterward, based on how proud we were. However, after the age of 23, I realized that I don't truly like making out in front of an audience. I'm not a PDA prude, but snapping a picture of you and your beau playing tonsil hockey isn't something I want to see on my feed. Get a room, you two!

"Billy, I knew you were the one the second I met you at Space Camp. Back then, I didn't think we'd last. But look at us now! You are my rock, my love, my one and only. Love U 4Ever, Baby."

When you post a message like this on Facebook, you want the world to see — you know, all those people who were like "Wow, I totally didn't think her relationship with Billy would last!" Save your speech for Billy himself, even though I'm sure he knows you love him based on normal, day to day, non-electronic communication.

"There's a reason as to why Valentine's Day is called VD! LOL, LOVE SUX," posts the socially awkward kid who comes on too strong during first dates. The only thing more annoying than showcasing your love is making a point about how stupid love is. And every year, there's one person who makes a post like this to try and get over the fact that they're single. The only "likes" they'll get are from people in the same boat, as well as people who just got dumped a day or two earlier.

There's always some whiner on your feed who takes the opportunity to complain about being single on Valentine's Day. Chances are, this is a guy who thinks he's totally misunderstood. The post will read something like, "I don't get it. I keep hearing women say that they want a nice guy, but I'm a nice guy, and I'm still so alone. I guess it's true that nice guys finish last."

Listen, bro. Chances are, you're single because you're an adult who feels the need to lament about your relationship status on social media. I mean, come on! Future employers might see this message! It's normal to feel a little down in the dumps, but a status is just begging for someone to say, "You'll find someone someday!" or "We love you!" In the real world, we call that "fishing for compliments."

For some reason, holidays like Valentine's Day are the perfect time to whip out all of those inspirational love quotes you've saved up on Pinterest forever. Just like song lyrics of your youth, you probably figure that they relate to your situation — but looking back, they probably don't. That, or they're so vague that they define 98 percent of the world who has once felt the rare emotion of love.

That being said, posting an inspirational quote is kind of the same thing as posting nothing at all. Instead, take the two minutes you've saved and work on loving yourself.

"Love yourself first and everything else falls into line. You really have to love yourself to get anything done in this world." - Lucille Ball

7. The "he put a ring on it" engagement announcements

V-Day is a big day for engagements. According to some forums I frequent, women dating men for more than a year and a half anticipate this being the day that their man will drop down on one knee and finally present them with the diamond they've been designing for years. Alongside, you know, the promise of spending their lives with them forever.

Listen, I'm no Grinch. I love a good engagement story. I like happy couples to take the next step forward. What I don't like is the stereotypical knuckle-suffocation photo of a diamond with the caption of "He liked it, so he put a ring on it!"

Ladies who get engaged on Valentine's Day? I beg of you. Keep it off of social media for a few days. Enjoy the moment for yourself. Call up your close friends, and tell them on the phone. When the excitement has died down, feel free to share it with the masses. Engagement is a big deal, but you should be hugging and kissing your future husband instead of taking ring selfies the second after he pops the question.

8. Photos of the V-Day dinner

Guys, I get it. It took like, two weeks to reserve a table on Valentine's Day, and you still had to wait in the lobby for 20 minutes or so once you got there. By the time your gigantic steak finally arrives to your table, you want to shout your happiness off the rooftops. Gigantic steak, everyone!

However, this can be slightly annoying as well. First off, it's a food picture. While we're all happy for your steak, it's not necessarily something everyone wants to see. Secondly, it can kind of come off as being slightly braggy. I mean, half of your friends will be eating Lean Cuisines that day, and they'll probably question your fine slab of cow. Thirdly? Think about it. Do you really want to reflect on the steak you ate years down the road? Or even like, a week from now? Just enjoy the steak, savor the moment, and stay off of your phone during dinner.