When a massive blizzard pummels the Northeast and Governor Cuomo declares a state of emergency in parts of New York, what’s a girl to do? Personally, I like to imagine what Jake Gyllenhaal would do. From the creepy Donnie Darko to 2014’s potentially creepier Nightcrawler, he’s made some questionable decisions. Fortunately, Gyllenhaal’s 2004 movie The Day After Tomorrow is full of (surprisingly practical) tips to stay warm if you’re left stranded by the #blizzardof2015, aka Winter Storm Juno.

In the movie, a mega-blizzard dumps dozens of feet of snow throughout the whole North Hemisphere, affecting thousands of people around the world, but most importantly young Sam Hall and his crush, Laura — spunky high school students from New York City. The storm, which was spurred (terrifyingly) by American consumerism and the global warming we’ve caused, traps Sam, Laura, and their ragtag team of new friends in the New York Public Library, where they burn books for warmth and talk about their regrets.

Don’t worry — scientists say the enormous and shockingly sudden storm is not a plausible outcome of climate change. But although the superstorm in the film is scientifically impossible, its characters actually employ mostly reasonable methods of keeping safe and warm when you’re snowed in. From the best supplies to stock up on to tips on treating sepsis in a pinch, The Day After Tomorrow has got you covered.

What Would Jake Gyllenhaal Do: When Sam almost drowns in five feet of freezing water, Laura rushes over to give him a hug. When he panics that his crush is touching him and asks what she is doing, she says she’s using her body heat to warm him up. “If we let the blood from your arms and legs rush back to your heart too quickly, your heart could fail,” Laura says. Sam goes along with it because she is cute and he is cold.

Did they get it right? Yes — cuddling to retain body heat is actually a very reliable source of warmth, and one that even FEMA recommends to fight hypothermia, especially if you have the misfortune to be trapped in a car on the side of the highway during a blizzard. In addition to finding someone to share body heat with, it’s also a good idea to move around a little to keep blood flowing. Stretching is one good way to exercise without getting too sweaty — when your clothes get damp, they lose their insulating power. To make a long story short, it’s cuffing season — you have an official excuse to spend the whole day snuggling.

WWJGD: Sam tells his newfound friends not to eat snow or ice because the water is frozen and will kill them. Instead, he tells them to melt snow before drinking it.

Did they get it right? Yes again! Drinking melted snow is A-OK, as long as you don’t pick snow from a particularly dirty area such as a sewer. If you have the resources, you might want to purify or strain your snow water so there aren’t any organisms in there.

WWJGD: Sam jumps into action when he finds out that Laura has a seriously infected cut on her leg, apparently sustained when she was leapfrogging between cabs on the flooded city streets. After the realization that she has blood poisoning and could go into septic shock, Sam makes it his mission to find antibiotics for Laura. Once he finds the miraculous penicillin and Laura takes a monster dose, she pretty much heals overnight.

Did they get it right? So-so. If for some reason you think you might go into septic shock, go to the doctor. Don’t try The Day After Tomorrow method at home because, as much as we might wish it, we can’t all be Emmy Rossum. Antibiotics are the best way to start treatment for septicemia — as they recommend in the movie, “a massive dose of penicillin” will help fight off bacteria. But if you really do go into septic shock, you might also need a breathing machine, kidney dialysis, or even surgery to recover fully.

WWJGD: Sam and co. use a 12-year-old bottle of Scotch as fuel to light their book-burning fire.

Did they get it right? Aside from the fact that you shouldn’t burn books unless you really have to because they are full of wisdom, this one is also a potential yes. Legally, scotch whisky is between 80 and 190 proof. Alcohol has to be at least 100 proof to burn, so theoretically you could douse some old textbooks with some single malt and keep yourself toasty warm — not to mention toast marshmallows over the fire.

WWJGD: Sam’s street-smart homeless friend, played by Jamie Foxx, encourages them all to stuff their coats with a layer of newspaper to conserve heat.

Did they get it right? A resounding yes! Newspaper is an excellent source of insulation, for your home or your jacket sleeves. Stuffing your clothes with crumpled-up newspapers is a common tactic used by the homeless to stay warm in the winter.

6. Not wearing a hat

WWJGD: Although Laura is smart and wears a head wrap, Sam does not wear a hat throughout the entire movie for unexplained reasons.

Did they get it right? No. This is a terrible idea. You should always wear a hat in winter to conserve heat, especially in extreme conditions. 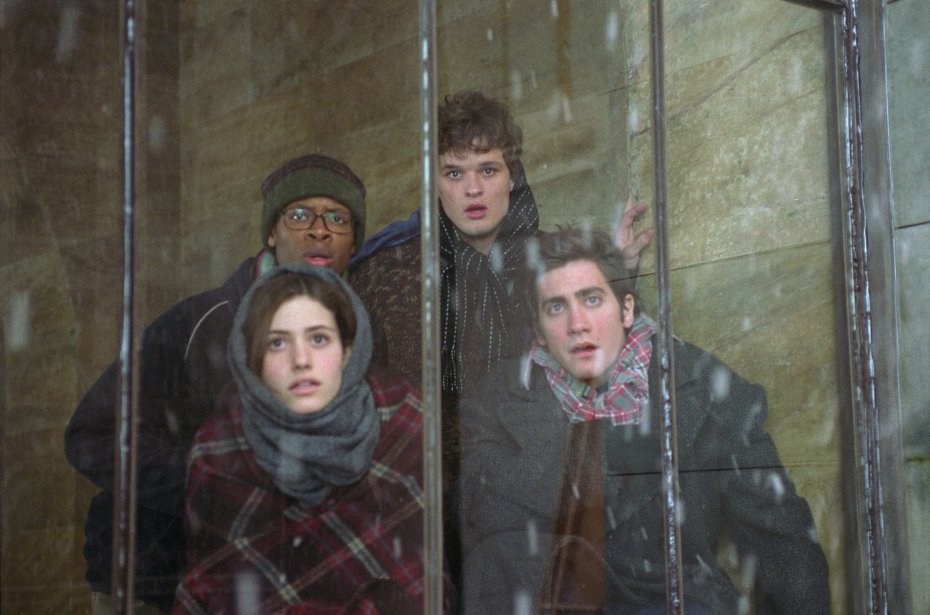 WWJGD: Apparently frustrated by the lack of delicious catered meals, Sam’s friend J.D. yells, “We’re not going to last very long on M&Ms and potato chips.” J.D. eventually has to deal with it because that is what they have to eat.

Did they get it right? Depends who you’re talking about. Nonperishable food items are best, and unfortunately you might not have kale chips on hand when the power goes out. If you can, try to get canned fruit or vegetables so you don’t suffer any vitamin deficiencies — you are trying to protect your immune system, which will not be helped by the heaps of sugar in M&Ms. Also avoid caffeine — that means no soda.

WWJGD: Sam’s dad, Jack, decides to hike from Pennsylvania to New York armed with only a big heart and some snowshoes. His hiking partner dies, but Jack makes it to New York in perfect health.

Did they get it right? A resounding NO. Do not go outside if there are blustering winds that make for low visibility, freezing temperatures, and poor driving conditions. Plus, snowshoeing is not as fun or easy as Dennis Quaid makes it look. See this guide if you’re really torn about whether to stay or go.