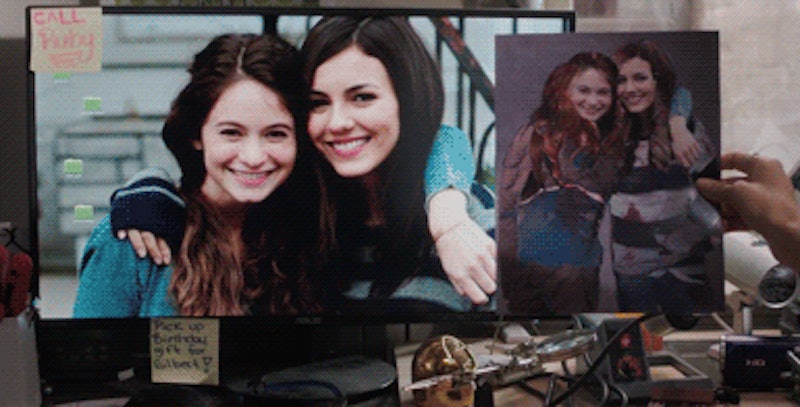 Things are starting to get really creepy and complicated on MTV's Eye Candy and it's not just because the serial killer that Lindy is trying to track likes to creatively mutilate his victims based on their personally diagnosed physical flaws. Lindy underwent quite a bit of trauma on Eye Candy 's third episode "HBTU." First she was mailed a picture of her and her sister Sarah that included pieces of images from other crime scenes. Next, she and the head of the NYPD Cyber Crimes division Catherine Shaw realized that the photo included Sarah wearing a bracelet that she had lost years ago before she was kidnapped. A bracelet only Lindy, Sarah, and her father would remember. So here's a question that must be asked: Could Lindy's father be Eye Candy 's serial killer/stalker? It's pretty unlikely thanks to a few other factors, but the killer must be close to Lindy in some strange way.

Lindy explained that the bracelet was a present she gave to Sarah, who promptly lost it. The two got in a huge fight in which Lindy didn't know why she was reacting so harshly, and it drove them apart despite them getting over the argument and Lindy taking over as Sarah's surrogate parent after their mother's death and until Sarah was kidnapped.

So why is it unlikely that Lindy's father is now killing a bunch of people and stalking his own daughter? The most obvious explanation is that this killer seems to be quite taken with Lindy for not having any of what he perceives as flaws. He is clearly dating his previous victims on a search to find "perfection" and when he finds a "flaw," he kills them out of anger for the lies they've told to seem perfect. Basically he's killing people for being self-conscious, which is insane, as I'm pretty sure most people in the world feel self-conscious about something or other.

Now I'm not saying Lindy's father is in love with her, which would take this show to a whole new place it really shouldn't go, but that doesn't mean he's not obsessed with perfection.

However, we don't know where Lindy's father is at the moment. In the first episode, we learn during the flashback where Sarah was kidnapped that their father gets "so hopped up on sedatives, he doesn’t even know what day it is." Could that mean he's been in an accident? He's a drug user? He's in physical and/or psychological pain? Perhaps he could have snapped and really is the killer, and the voiceover's lusty obsession with Lindy is just a red herring for some other kind of psychological obsession.

The killer also kidnapped Lindy in “HBTU” but let her live, let her watch as he killed previous suspect Reese and then left her a present for her birthday: Sarah’s bracelet. How would a random killer know how important this bracelet was to Lindy and her family if the only people who knew about were her immediate family? Maybe Lindy and Sarah’s dad is the killer and also kidnapped Sarah. Maybe he did it all in the hopes that Lindy could one day be as smart as him, challenge him, and/or truly understand him as the killer’s voiceover said on Monday night.

There's no way we know quite how deep the killer's depravity goes, so it's very possible Lindy's dad is said killer and we're just seeing the tip of the iceberg. Anything is possible on Eye Candy and that's what has made it so creepy in a matter of just a few episodes.