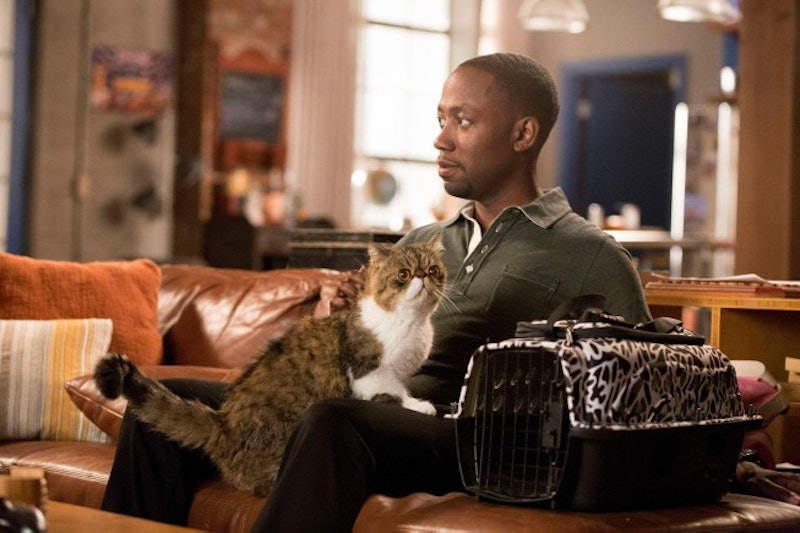 So, we've already solved the will-they-or-won't-they of Nick and Jess (spoiler alert: they will). And it seems pretty obvious that Schmidt is going to pick Cece over Elizabeth (really New Girl, you're trying to make me believe that Schmidt would pick a character who was only introduced halfway into the second season? Puh-lease.) But there's one unexpected love story that is yet to be solved in New Girl: Winston and his cat. It wasn't exactly love at first sight, but it's clear now that Winston is devoted to his new furry friend. But what will happen between these two lovebirds?

An Epic Battle Over the Cat

So technically, the cat is stolen property. And it was kind of a bummer to see Daisy go so quickly — all it took was less than half of an episode and one unexplained instance of cheating, and then no more Brenda Song (she's lost to Dads now, poor girl). So Daisy should get a proper sendoff with one last epic battle for her cat. Will they play "True American" for the cat? Will Daisy try to steal him under the cover of night? Will there closure for their relationship? The possibilities are endless!

Poor Winston, he's only had two love interests in the whole show, and they've both been pretty underwhelming. First his relationship with Shelby got boring, and now Daisy cheated on him. And we all know what happens when someone has seemingly hopeless prospects in love — they become a cat lady. And who would be a better lady than Winston? Cats don't care if you sit around in your underwear all day doing puzzles, and this way we'd get to see more adorable cats. Because really, what better way to console yourself about your eternal loneliness and the fact that you will one day die alone than cats?

The Cat Becomes Another Roommate

Nick and Jess will have to move out eventually. So why not have the cat pay rent? It will be way easier for Winston to play pranks on a cat. And he can lick Schmidt's nipples all day long, so it's the perfect living situation for everyone. Who knows, maybe the cat can play the ukulele even better than Jess. And he could wear a tiny, adorable hoodie so they wouldn't have to miss Nick too much. And Winston and the cat could join the police force together and catch "purr"-petrators...there would be so many puns...actually, what are you waiting for, New Girl? Just make the whole damn show about this cat already!