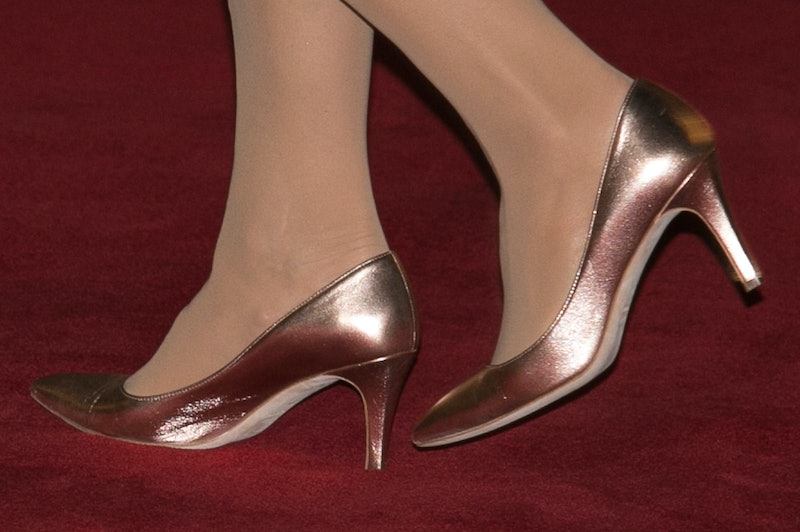 When we’re little, we often accept things without explanation: A stork dropped you at your parents’ doorstep. The family dog went to live on a big farm in the sky. And, if your mother is anything like mine, pantyhose are a necessity. It’s not until we’re a bit older that we start asking questions: Where do babies come from, really? Where the hell is Spot? And for the love of god, what is the point of pantyhose?

I can remember getting ready for kindergarten, never questioning why my mom required hosiery under my party dress. (Or, for that matter, why my five-year-old self insisted on evening wear to begin with, but I digress.) The point is, the no-bare-legs-while-dressed-up rule haunted me through adolescence, and even into adulthood.

By the time I was old enough for school dances, sheer tights had become — like — so uncool, so I followed the example of my friends and ditched them. On the one hand, I felt liberated — from the hunt for the perfect shade of nude! From the tyranny of the sagging crotch! From the frustrations of the inevitable run and all of its subsequent home remedies! (Although I never tried jam or hairspray as a quick fix, I did paint over rips with clear nail polish.) Had I known at the time that pantyhose are made from lanolin, an ingredient gleaned from sheep fat, my bleeding heart would have felt even more relieved.

But secretly, I worried about being… inappropriate. For my first job interview, I went au natural under my pencil skirt, but was still debating the soundness of this decision as I fielded questions about my resume. Sure, my generation had shunned the stocking in the same way my mother’s generation had shunned barrel curls and swing skirts, and reinventing fashion is just what people do. But is it always a good decision? I mean, I really love the barrel curl.

The fact that I didn’t get the job? That was probably down to my lack of qualifications more than my lack of leggings, but who knows? True, the hosiery tradition has its roots amongst men — during the time of King Henry VIII, guys wore stockings with garter belts under puffy shorts at court — but for most of history, hose has been a woman’s accessory. Or, at least, a “proper” woman’s accessory. Let’s just say a Victorian lady sans stockings wasn’t really a lady at all.

And even as hemlines shortened over the decades — OK, especially as hemlines shortened — the no-bare-leg rule stuck. Unfortunately, the stocking material de jour — artificial silk that commanded the early 20th century market — left much to be desired. Female comedian Phyllis Dillon once said: “Women want men, career, money, children, friends, luxury, comfort, independence, freedom, respect, love, and cheap stockings that don’t run.” By 1939, ladies got the last part of this wish, thanks to the invention of nylon.

But the demands of World War II meant that most of the country’s nylon supply was redistributed for use in rope and parachute making. Pre-conflict, hose may have cost $1.25 a pair, but it was now running — no pun intended — for $10 a pop on the black market. As the fighting drew to a close in 1945, hoards of women sometimes 40,000 strong waited outside their nearest department stores all night long. Macy’s alone sold 50,000 nylon pairs in six hours.

Next came the invention of pantyhose – a one-two-punch of panty and hose that eliminated the need for a garter belt. With models like Twiggy making the miniskirt mainstream in the 60s, and more and more women entering the workplace, the new iteration became a wardrobe necessity.

Of course, the stocking didn’t reign supreme forever. The now-defunct Hoisery Association, which advocated for legging manufacturers for 100 years, attributed the accessory’s decline to the adoption of more casual standards in the workplace. And once women got a taste of a more breathable existence, they stopped sporting their hose on fancier occasions, too. But I’d argue this dip in stocking sales is more like a temporary ebb in the pantyhose tide, rather than a permanent change.

Sure, Michelle Obama may have summed up the nation’s collective hose opinion when she publicly denounced them back in 2008. And it may be true that stockings inhibit the body’s natural cooling process by preventing the evaporation of sweat. And it may be further true that stockings have simply lost their purpose, considering a bit of skin is no longer a shocking sight to behold. Ironically, the accessory once associated with modesty has become one of the most fetishized within the porn industry. It now seems to show up within two camps only: On silver-haired ladies in tweed jackets at the grocery market, or on some triple X channel late at night.

But if we’ve learned anything about stockings, for better or for worse, they’ve got staying power. In fact, it was a cut-off pair that inspired Sara Blakely and her billion-dollar, footless pantyhose company, just a little startup called Spanx. Consider it proof: We haven’t written off nylons as completely as we thought. In fact, most of us have a pair stashed away in the back of an underwear drawer, just in case they ever make a comeback. And, I’ll just admit it, my inner five-year-old is sort of hoping they do.