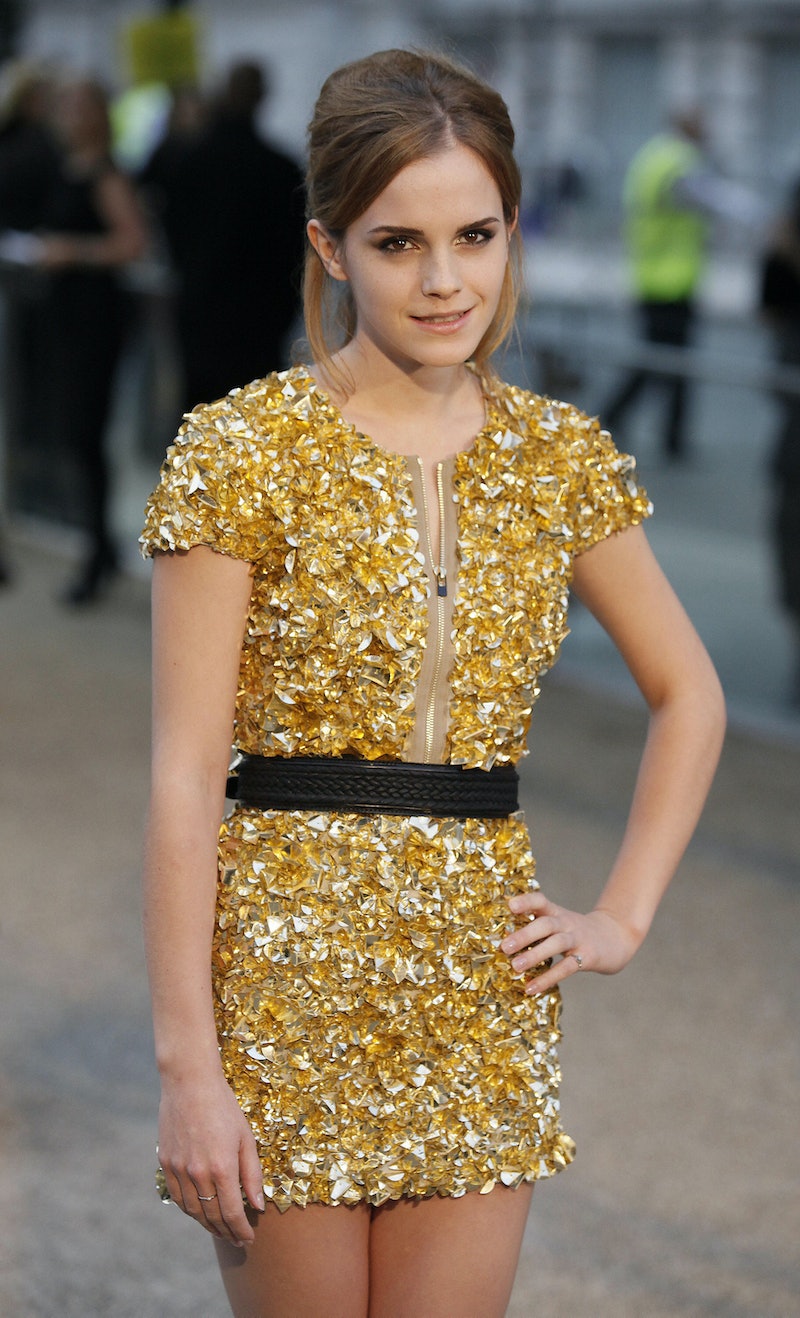 As you’ve no doubt heard by now, Emma Watson has officially been cast as Belle in the couldn’t-come-any-sooner live-action adaptation of Beauty and the Beast . The actress — who also starred in the adaptation of J.K. Rowling's Harry Potter series, of course — announced Monday night that she's taking on the bookish titular character in the film, which is scheduled to begin production later this year. And the role is perfect — not only does Watson look the part, but she is also a self-professed book lover. Heck, choosing the U.N. Goodwill Ambassador and HeForShe advocate to play this Disney princess may also ensure that Belle gets her due as a feminist heroine. (Maybe we’re getting ahead of ourselves, but, then again, Bustle already has a few suggestions on what the haute couture-loving actress could wear as to modernize Belle’s iconic yellow dress, so it seems we can't help being big dreamers.)

Could anyone possibly doubt that Watson was as born for the role as she was for Hermione? I doubt it, but in case there’s even a speck of doubt somewhere in the Interwebs, Watson has never been shy about sharing books that have meant a lot to her in interviews — or tweeting out book recommendations. I’ve compiled a list of the books that you might find in Watson’s collection (though the jury's still out on whether or not there are spiral staircases and ladders in the actress’ personal library).

In a 2010 interview with TIME, Watson stated that Dahl’s The BFG and Saint-Exupéry’s The Little Prince hold a special place in her heart. In fact, she used to read The BFG out loud with her father when she was young. “I like books that aren't just lovely but that have memories in themselves," she said. "Just like playing a song, picking up a book again that has memories can take you back to another place or another time."

According to emma-watson.net, Watson loved the Noughts & Crosses books by Blackman when she was younger. Set in dystopian England, where society is segregated into Noughts and Crosses, this thriller follows the friendship, and illicit romance, between Callum and Sepoy.

The Shadow of the Wind by Carlos Ruiz Zafón

Back in 2007, Watson cited Zafón’s The Shadow of the Wind as one of her favorite books in an interview with Scholastic. The actress has also said that she really enjoyed The Angel’s Game , the prequel to The Shadow of the Wind . This gorgeous book is completely engrossing and, frankly, tailor-made for book lovers. In The Shadow of the Wind , Daniel Sempere comes across a book with a past in Barcelona’s hidden Cemetery of Forgotten Books. His efforts to unravel the mysterious backstory of Julián Carax, the book’s author, lead Daniel through a dangerous maze of coincidences and inconsistencies.

The Remains of the Day by Kazuo Ishiguro

As a huge Ishiguro fan, I was excited to read that Watson loved The Remains of the Day just as much as I did. Ishiguro took home the 1989 Man Booker Prize for this stunning little masterpiece, which was adapted into the 1993 film starring Emma Thompson and Anthony Hopkins. Stevens, a dedicated English butler, struggles with lost opportunities brought on by his lifelong adherence to the dignity of his profession — in particular, a romance with former colleague Miss Kenton.

I Capture the Castle by Dodie Smith

Another of my favorite books, Smith’s I Capture the Castle , is high on Watson’s list. (Clearly, the actress and I have the same taste in books and should be best friends.) The author of The One Hundred and One Dalmatians blew it out of the park with this thoughtful and wacky coming-of-age story. Sinking deeper and deeper into poverty, the Mortmains live an uneventful life in a decaying castle in the English countryside. When the Cotton brothers move in next door, they bring even more color into the lives of Cassandra Mortmain and her sister Rose. Cassandra has literary aspirations, and her writing is rife with beautiful insights into the nature of sacrifice, self-discovery, and the all-consuming joys and pains of first love. Watson is an avid journal writer herself, and shares Cassandra's dedication to putting down the day's events in writing. I’m sure she would agree with me that the book’s opening line, “I write this sitting in the kitchen sink,” is one of the most perfect opening sentences in literature.

Watson spoke fondly of this book by Gregory, author of The Other Boleyn Girl, during a 2010 interview with Harper’s Bazaar. She said that while reading The Constant Princess she grew to admire Catherine of Aragon’s strength and determination, particularly after Henry VIII annulled their marriage because of her inability to produce royal heirs. He went on to found the Church of England so that he could marry Anne Boleyn — banishing Catherine from court to Kimbolton Castle. Lauded for her independence and determination, it makes sense that Watson would admire this brave and headstrong woman.

In an interview with Vogue in 2011, Watson explains how Smith’s 2010 memoir Just Kids hit close to home — and why shouldn't it, considering the book deals closely with the ups and downs of being an artist? Catapulted into fame at a very early age, Watson grew up in the public eye and has borne the all-too-stressful task of trying to figure out who she is while in the spotlight. “I want to live like Patti," Watson said. "I want to write like Patti. The book was so honest and brave. I loved the way she sees the world. I really felt that life was more beautiful after I read it, and I felt more hopeful."

Love Letters to the Dead by Ava Dellaira

Back in March 2013, Watson endorsed this powerful young adult novel through Twitter. After her sister May’s death, Laurel begins to fill a notebook with letters to dead famous people, like Kurt Cobain and Amelia Earhart. Through these letters, she begins to come to terms with the pain of losing her sister and traumatic events in her own past. Stephen Chbosky, author of Perks of Being a Wallflower and close friend of Watson's, also sang this novel’s praises when it first came out. I wonder who recommended it to whom.

Quiet: The Power of Introverts in a World That Can't Stop Talking by Susan Cain

A self-declared introvert, Watson is an admirer of Cain's bestselling book. During an interview with Rookie Magazine ’s Tavi Gevinson, Watson spoke about how Quiet changed her perspective on certain aspects of her personality. In her words: “[Quiet] discusses how extraverts in our society are bigged up so much, and if you’re anything other than an extravert you’re made to think there’s something wrong with you. That’s like the story of my life. Coming to realize that about myself was very empowering, because I had felt like 'Oh my god, there must be something wrong with me, because I don’t want to go out and do what all my friends want to do.'”

More like this
‘The Mosquito Coast’ Book Ending Includes A Major Character’s Death
By Brad Witter
Allie Rowbottom Will Have Her Feminism With A Side of Botox
By Samantha Leach
The 'Firefly Lane' Book Ending Teases Way More Tears To Come In 2023
By K.W. Colyard
'Bridgerton' S3 Teases Exciting Social Season For Penelope Featherington
By Bustle
Get Even More From Bustle — Sign Up For The Newsletter