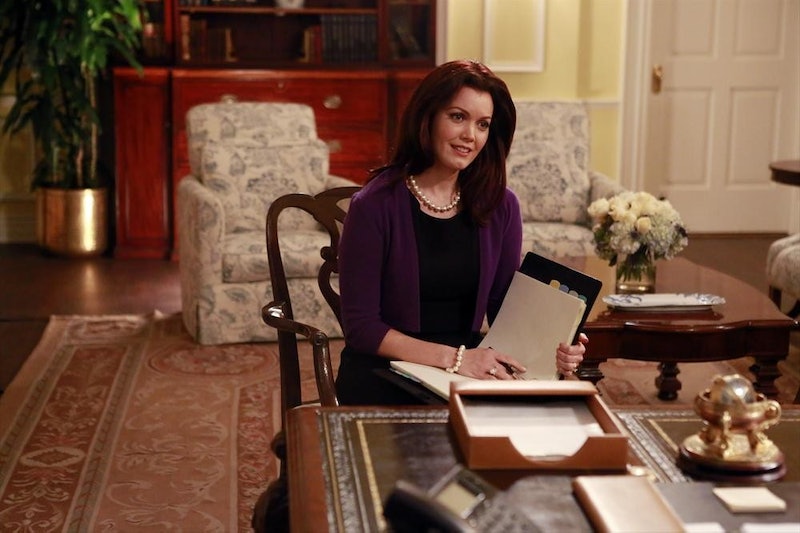 Scandal has left its fans hanging before, but nothing prepared us for the cliffhanger the ABC's winter finale dropped on us when someone kidnapped Olivia Pope and I think it might be Mellie. To recap: The abduction was upsetting for multiple reasons. First of all, the thought of our political fixer being in danger is, in itself, downright terrifying. Secondly, she was just about to have hot, on-top-of-the-piano sex with the oh-so sexy Jake Ballard. And last, but certainly not least, the incident caused her to spill her red wine all over her beautiful white couch. Soooo… pretty rude behavior all around, if you ask me. But the big question now is who exactly Olivia's abductor is and I'm convinced First Lady Mellie is somehow involved.

But let's back up for a minute here. For those of you in need of a refresher, Olivia was "taken" Liam Neeson-style during the 15 seconds it took Jake to grab a pillow and blanket from the bedroom, proving that the perp was not only fast, but extremely stealthy. So yeah, obviously I don't think that was Mellie unless she's been taking some crazy martial arts classes that we have yet to learn about. Clearly, this was a team effort of sorts, which was made all the more prominent when the abduction was intercut with a scene between Fitz and Vice President Andrew Nichols, who basically insinuated that he'd just taken something that the President cares very deeply about.

Sure, he didn't come right out and say "My henchmen kidnapped Olivia and will harm her if you don't agree to wage war against West Angola." But the sentiment was more than implied, which makes me think that there's more to this story than meets the eye. You see, Scandal never reveals its full hand to its fans. So for us to just assume that Andrew is the complete brains behind the operation feels a little naive. There has to be some sort of shocking twist to go along with it — not only because the series tends to dictate as much, but also due to the fact that Scott Foley recently admitted to Time magazine that he knows exactly who kidnapped Jake's true love and confesses that the revelation is "so good."

This seems to indicate that there's more than just one culprit behind this devious Pope-duction plot and I'd bet my white hat that not-so-smellly Mellie is secretly in cahoots with Andrew. And here's why…

Former First Lady Bitsy has taken Mellie under her wing as of late and shown her how she can use her position in the White House to her advantage. It's not just a figurehead position full of tea parties and charity events. It's a podium that can help to manipulate and bend others to your will. You just can't let them realize you're doing it. Perhaps these little lessons have been teaching Mellie more than we think.

Her Relationship with Andrew

We know the two of them have started sleeping together again. But there's always the chance their little rendezvous extend far beyond the bedsheets. In fact, her recent spat with Liz could prove to be very telling about Mellie's plans for the future: "When the next election rolls around, I'd make damn sure you bet the right horse… Because when it comes to screwing someone, I'm not nearly as gentle as Andrew. From me, it will hurt." Could it be Mellie's intent is to back Andrew in the next presidential election? If so, it would certainly help to tie in why the two would be conspiring together to make Fitz bend to their will. Or maybe she intends to run for President herself, which I fully support BTW. Mellie 2016!

Her Deep-Rooted Hatred for Olivia

I mean, is there anyone who has greater reason to hate Olivia Pope than the First Lady? Between all the lies and the cheating, there is nothing but bad blood between these two. So for Mellie to be the one behind Olivia's current predicament would make for a highly compelling (not to mention rather fitting) plot twist.