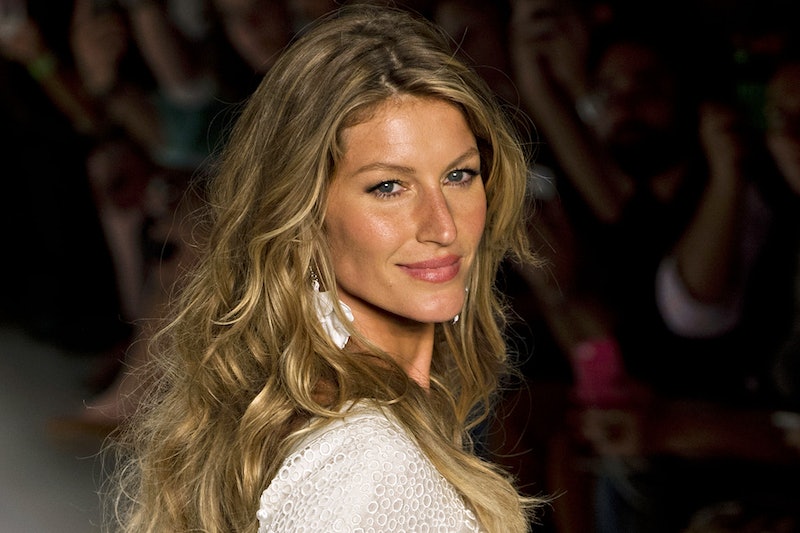 It's officially Super Bowl time again, and it's bringing back all kinds of memories — and not just ones that revolve around the best commercials of the year. Remember that time the Patriots lost the Super Bowl to the Giants in 2012? That was a bummer for Pats fans, but no one was more pissed than the wife of Patriots quarterback Tom Brady, as know as Gisele Bündchen. The best part of the Super Bowl that year was finding out that Bündchen totally went off on reporters and accused Patriots receivers as, well, sucking at their jobs as she was being followed to the locker room... and that there was video evidence to prove it.

And despite the fact that Bündchen says she isn't particularly into the sport, her previous comments make it clear that she isn't afraid to tell the Patriots exactly what they need to do, even if Brady thought she was a little out of line when making them. Sometimes, if you want to win the game, you need a little tough love — not under inflated footballs. Sorry, guys.

Bündchen would make the perfect Patriots coach for their Super Bowl game, and there are more than enough reasons why.

She'd be the best physical trainer

Models are generally filled with knowledge on nutrition and exercise, and I don't doubt an asset like this would make her an awesome coach. I mean, she'd probably have to adjust her approach from exercising and eating in a way that makes you runway fit into a way that would help somebody tackle someone, but she's been doing this forever. She's got this.

Which basically means she knows how the players move and work together, and observation is a powerful thing. I bet Bündchen could easily name the team's biggest weaknesses and figure out a way to fix them just from watching them play more often than not.

Have you seen that video I was talking about earlier? Gisele is not playing around.

She knows all the team's dirt

Don't act like husbands and wives don't tell each other everything. I'm willing to bet Bundchen is well aware of Brady's teammates secrets, and she could totally make them cry if they don't listen to her. "Hey, Gronkowsi! Maybe you would be able to catch that ball if you didn't still wet the bed! Tom told me!"