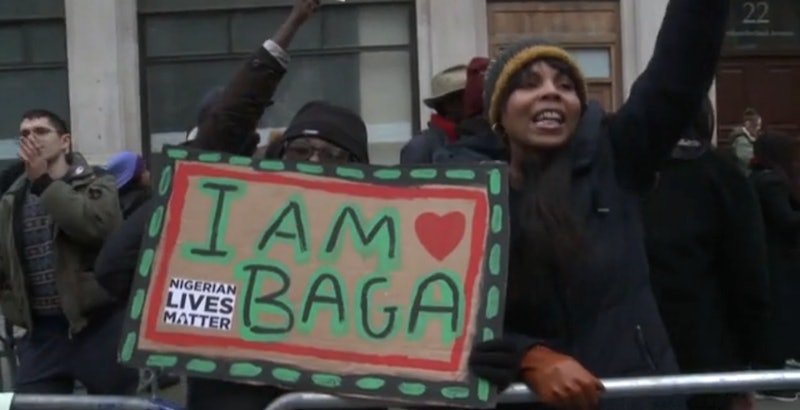 On Jan. 25, protestors carrying "Nigerian Lives Matter" signs gathered at the Nigerian High Commission in London. The rallying cry was one that echoed #BlackLivesMatter, a call that pointed out the disproportionate mistreatment of black people at the hands of police in the United States. According to Akinola Davies Jr., a Dailymotion Content Manager and rally organizer, the #NigerianLivesMatter protest calls for solidarity for the victims of Boko Haram and demands action from Nigeria's leaders. It gives people a chance to “do something. To do anything.”

A chance that's desperately needed by those of us watching the events happening in northern Nigeria from a distance. When, after days of being heavily focused on the news of the killings at the Charlie Hebdo office, I finally saw the news of the attack on Baga, I was overwhelmed. I was fearful of the militant group that has terrorized northern Nigeria for years, and frustrated, as I read more details about the lack of attention and action that the massacre in Baga was receiving from the Nigerian government. Ultimately, I felt helpless. What could I do, when Nigeria’s President, Goodluck Jonathan, had to be called out before he even publicly acknowledged the killings in his own country? In Davies Jr.'s op-ed for OkayAfrica, he states:

It was symbolic to see an array of world leaders coming together to condemn violence and defend free speech. We just wish that something on any scale could have been done for the 2,000 people in Baga; the 17 who lost their lives to a child suicide bomber; the 200 girls who went missing and are yet to be recovered; the 5,000 refugees in a neighbouring town; the 7,000-10,000 who fled to the border, and ultimately the 800,000 people now displaced from the terror caused by the violence from the republics of Cameroon, Chad, Niger, and Nigeria.

It’s that lack of attention from the Nigerian government that the #NigerianLivesMatter is hoping to change. But as I continued to read news article after article, I noticed another irritating feature about the way the news was being framed. “Boko Haram Just Killed Thousands in Nigeria and Nobody is Talking About” said news outlet after news outlet, even as they themselves, talked about Boko Haram’s latest attack. Other Africans and Nigerians repeated the phrase even as we talked about it. "Nobody cares." But we're not "nobody."

I absolutely understand the sentiment behind the statement. The Baga massacre coincided tragically with the Charlie Hedbo shooting — the world doesn’t need even one more terrorist attack, let alone two — and the outpouring of media and international attention for France was enormous. Media outlets around France and the world offered their support to the surviving staff members, international leaders flew to France to march in support, and citizens all over the globe clamored for the magazine’s next issue. Compared to the attention the Charlie Hebdo victims received, the time given to Baga victims in comparison is miniscule. So considering the little reporting the Baga victims have received, we shouldn't continue to draw further attention away from them by placing the attention on how western media handles the story. It's a conversation that should be had, but not the only conversation.

I am not disregarding the power of the press and its ability to bring about public change, but it’s important to not distort or trivialize the message of #NigerianLivesMatter by placing the focus on western media.

“The occupied area that Boko Haram has is now the size of Belgium,” Bwalya Newton, a rally organizer, told The Telegraph. “That’s something that we need to start shouting about. It’s terrifying and the people who are losing their lives need to know we care.”

More like this
5 Ways To Stand In Solidarity With Women In America From The UK
By Sophie McEvoy
How To Fight For Reproductive Rights, Based On How Much Time You Have
By Courtney Young
For These Abortion Clinic Volunteers, Going TikTok Viral Is A Risk Worth Taking
By Audra Heinrichs
Why You're Seeing Green Bandanas At Abortion Rights Protests
By Lexi Inks
Get Even More From Bustle — Sign Up For The Newsletter