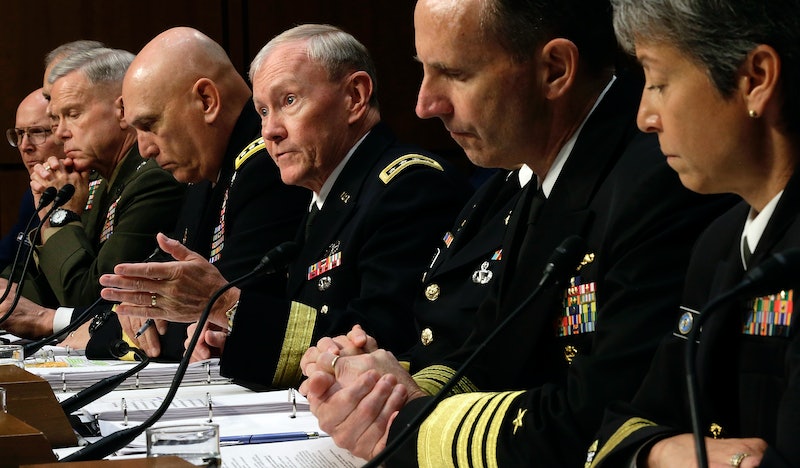 Female Senators took the lead Tuesday morning in a congressional hearing aimed at tackling the issue of sexual assault in the military. In a tension-filled debate, the Senate Armed Services Committee reviewed seven bills that would restructure the prosecution process for these crimes. Many of these bills have been sponsored by congresswomen.

The most contentious of these reforms, The Military Justice Improvement Act (S.967), would remove sexual assault cases from the military chain of command in the hope of encouraging victims to speak out without fear of jeopardizing their positions within the military. Republican Senators John Cornyn (R-TX) and Jim Inhofe (R-OK), among others, will join with the Pentagon in fiercely resisting any changes to the institution’s traditional top-down structure.

Still, combined with a number of high-profile sexual assault cases in recent months, this figure has shocked the public and lawmakers alike. President Obama had strong words for the military following the release of the report. "If we find out somebody is engaging in this stuff, they are going to be held accountable," Obama said at a White House press conference, "Prosecuted, stripped of their positions, court-martialed, fired, dishonorably discharged. Period. It is not acceptable."

Among those testifying before the congressional committee on Tuesday were the Military Joint Chiefs of Staff, military lawyers, and leaders of victim advocacy groups. Military representatives tried to focus the conversation on vague references to changes the military's cultural climate. Their example of having soldiers watch the documentary "The Invisible War" left Gillibrand so frustrated that she buried her head in her hands. Meanwhile, Sen. Claire McCaskill (D-MO) sharply accused the military of conflating sexual assault with a "crime of lust," and of using language in their questionnaires that encourages underreporting.

A record seven women sit on the Armed Services Committee this year, introducing female representation in a field where women’s voices have often gone unheard. This picture, however, suggests that women at the hearing are still grossly underrepresented.