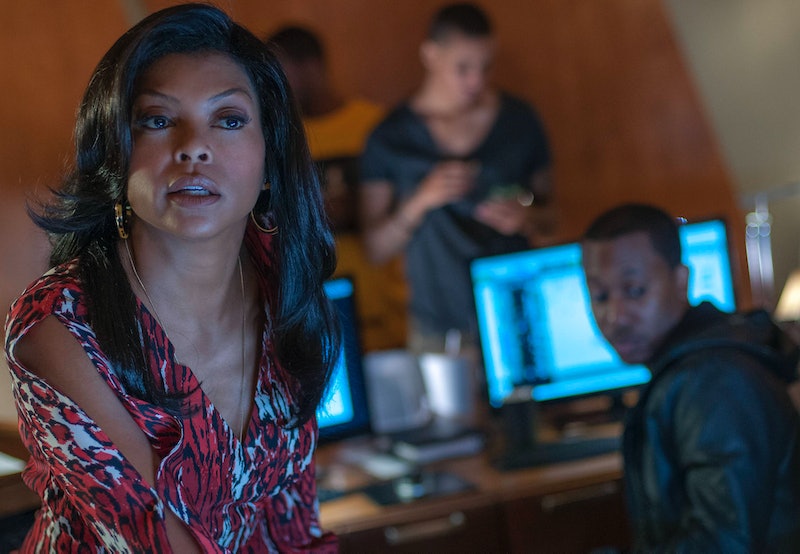 The biggest mystery of Fox's newest breakout hit series Empire isn't about Lucious' decision, Jamal's future in the music business, or even Hakeem's relationship with Naomi Campbell's character Camilla. It's all about arguably the most dynamic character on the series: Taraji P. Henson's Cookie. As we already know, Cookie made a deal with the feds that helped her get out of jail 17 years into a 30-year sentence, but we don't know exactly what information she gave and why the feds are still asking her to help them. What we did find out in last Wednesday's episode, "The Devil Quotes Scripture," is that the case Cookie helped the feds with is actually not about Lucious, contrary to popular (aka my) original theories. According to Agent Carter, Cookie was giving evidence for a case against a man named Frank. So, who the heck is Frank on Empire ?

Here's what I know about Frank: his first name... And that's it. Seriously. I'm not even sure of what his last name is aside from that it seems to start with a G. I couldn't even find a character description for the guy. But that didn't stop me from coming up with a bunch of theories.

Here's what I'm thinking. In a promo teasing the rest of the season (below), Cookie reveals that she has to deal with the feds and with hitmen, and clearly the latter seems to potentially be causing the most danger. Cookie also tells Agent Carter that she genuinely believes that if she testifies, she'll by killed. So why does Frank have her so scared? Seems to me that Frank has to be some kind of powerful man Cookie and Lucious' background. He could even be the drug kingpin for whom the Lyon family worked. Perhaps Cookie was able to get the $400,000 for Lucious' rap career and company through money that was being supplied by Frank.

It would make sense that Cookie would make a deal against Frank to the feds, especially if she wanted to get out from under his thumb. And it would also make sense that Frank would send people after Lucious, Cookie and the whole Lyon family if Frank found out there was a federal case being brought against him. Though the only doubt I have about this theory is why haven't we seen Frank from the beginning? If his money and his original jobs for Cookie and Lucious are what produced the empire, shouldn't he be looking for his cut? To catch up on everything that happened in Empire Season 1, check out the recap video below.

Maybe Frank has already been arrested and is now awaiting a trial in which Cookie has to testify. That could also explain why he'd send hitmen after her, because he discovered she is betraying him. It would also make sense as to why Cookie doesn't want Lucious to know about the deal. Maybe he doesn't even know exactly where Cookie's original investment came from and isn't involved in her business with Frank. But one thing's for sure: I can wait to find out where he comes into play in this already dramatic and engaging series.