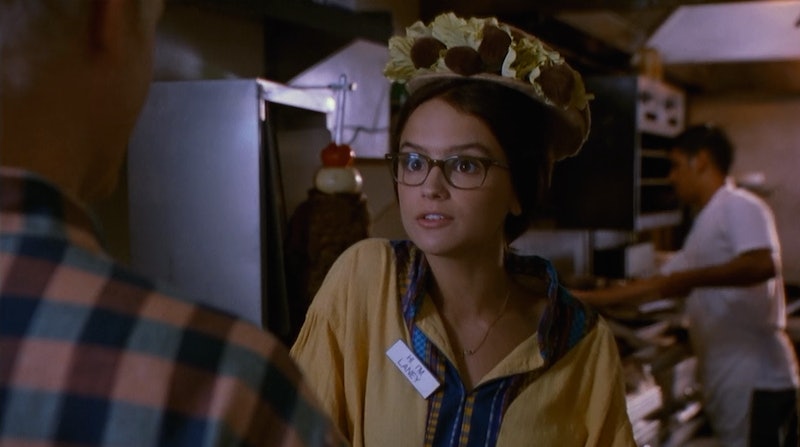 Like you can't disguise a hot chick with glasses and a ponytail, you can't disguise a late '90s teen movie with the tagline of a modernized My Fair Lady. For those of you that may not remember it in all its greatness, She's All That is exactly that: Though it's loosely based on George Bernard Shaw's Pygmalion (which is, in essence, the play My Fair Lady is based on) yet it really played like a cheesier variant on Pretty in Pinkset in 1999. More important than any of this, though, is that the film is heavily replicated and parodied in Not Another Teen Movie, and that's how you know it's an awesomely bad example of the teen film genre.

The plot is so simple, it feels as if it was written down with crayons: Popular jock Zachary Siles (Freddie Prinze. Jr.) bets that he can transform any girl into the next prom queen, essentially usurping the crown from ex-girlfriend Taylor Vaughn. The project? Laney Boggs (Rachael Leigh Cook), an unfriendly artsy type who has severe trust issues. What happens when Zack gets close to Laney and he starts developing actual feelings for her? It's a real surprise ending if you've never seen any movie ever.

But in spite of it's hackneyed format, there's some especially special elements to this movie that make it really stand out. And, being the bad movie connoisseur that I am, I've faithfully captured those things for you.

So for your entertainment, here's a chronological documentation of the all the quirks, absurdities, and stunning Oscar-worthy lines that make up this gem of a film:

She can't help that her head is remarkably round, but those comically oversized glasses? The paint covered overalls? It's all so Rugrats, or something. I just want to dump her in the playpen until Stu and Didi get home.

2. Zack considerately put up an "I'm a giant jerk" sign on his car.

The hummer-jeep gas-guzzler would've tipped me off, but I appreciate being reassured.

3. He also has a picture of himself hanging up in the school hallway.

Obviously, with those first class sideburns, Zack is EASILY the hottest 25-year-old at Harrison High.

5. The most popular girl in school lives in Elle Woods separates.

Better than Rugrats Chic, but not by much.

6. Usher (yes, USHER) does the school announcements, and finds it socially appropriate to recap Zack's break-up.

"I also want to give a shout to Lisa Wexler, who's grandma died last week, and don't ya'll forget that it's Taco Tuesday down at the cafeteria." Like, not that, but basically that.

9. This jock was accepted to EVERY IVY LEAGUE SCHOOL IN AMERICA.

THAT ISN'T HOW THIS WORKS, THEY PEAK IN HIGH SCHOOL AND THEN WORK AT LA FITNESS FOR THE REST OF THEIR LIFE. Oh my god, between this and Britney Spears as a valedictorian in Crossroads, the film industry is trying to give me an ulcer.

10. That plaid outfit on the left.

Ridiculous outfits are clearly par for the course, but this one is just PERFECT for a third-tier friend, you know?

Degrading, but between her style and job exotic food place, Laney is the '90s equivalent of every bespeckled 19-year-old hipster that works in a vegan bakery. Incidentally, those are the girls my boyfriends leave me for, so she wins this round.

14. "Do you know how many gallons of chemicals are dumped into the oceans each year?"

Who doesn't pull out rejected Lisa Simpson quotes on a first date?

Literally the first time they've ever hung out.

16. Tweezers and contact lenses transform her into a supermodel.

I've tweezed my unibrow into a twin set many-a-time, but not ONCE has Sixpence None the Richer played in the background while I walk down the stairs.

17. In fact, this is the only person who looks like an actual teenager.

Legit me in 9th grade.

Literally they have hung out two and a half times.

19. This Prom Queen race is actually a REALLY close call.

On one hand, you have unique rebel Laney who's liberal views and social awareness earns her the support of pro-choicers, the school's Gay Students Union, and those who are sick of the oppressive rule of the bourgeoise population.

On the other hand, Taylor has lattés.

21. The prom has complex synchronized choreography.

Instead of what usually happens these days...which is that a mini Sodom and Gommorrah breaks out on the dance floor.

22. The most popular girl in school getting crowned prom queen is somehow the only realistic thing about this film.

I mean, Taylor had lattés.

They've really fallen in love over the past three days, and she announces: "I feel like Julia Roberts in Pretty Women. You know, except for the whole hooker thing." I couldn't imagine a more worthy successor to Audrey Hepburn.

More like this
The 'Hocus Pocus' Sequel Finally Has A Release Date & It Makes Total Sense
By Shannon Barbour and Radhika Menon
Everything To Know About 'My Big Fat Greek Wedding 3'
By Grace Wehniainen
Emma Thompson, Lashana Lynch, & Stephen Graham Lead Netflix’s 'Matilda'
By Sophie McEvoy
15 Intriguing Movies On Netflix That Are Based On True Events
By Mary Kate McGrath, Shannon Barbour and Grace Wehniainen
Get Even More From Bustle — Sign Up For The Newsletter