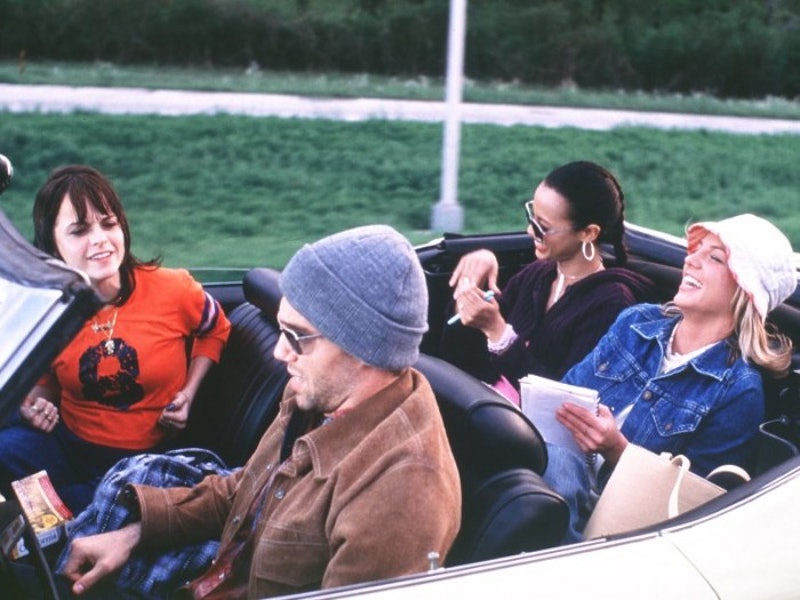 Any millennial, even the weird, goth-y chicks like me, will acknowledge there was a time when Britney Spears ruled our world. Though the late '90s were a boon for Britney, it was really the very early 2000s where she was at the pinnacle of her career — so much so, that MTV decided to produce the film Crossroads as a vehicle for Britney's acting prowess. We all remember it: Spears' first and only leading film role, alongside young Taryn Manning and young Zoe Saldana. And though it's an iconic part of the early '00s, I have to say it...perhaps I'm breaking the rose-colored glasses for some of you hardcore Britney fans, but Crossroads was filled with so much unbelievable ridiculousness.

Here's the plot, if you can't recall: Three estranged friends reunite for a cross-country road trip to L.A. These friends include perfect virginal Lucy (Spears), rude and popular Kit (Saldana), and knocked-up daydreamer Mimi (Manning). They catch a ride with generic hot guy Ben (Anson Mount, now star of Hell On Wheels). Kim Cattrall is there, too, as Lucy's awful mother, and Justin Long makes a random appearance in the beginning as well. This movie was sort of star-studded!

Anyway, through their journey, the girls reestablish their friendship, which is sweet — but, other than that, things in this movie are largely terrible.

Unlike the poor-quality but light-hearted From Justin to Kelly, Crossroads has major guts for mixing poor-quality with overwrought melodrama, all while blending in a lack of realism. For this, as well as many other reasons, it should've slaughtered the careers of many — but as you're about to find out, most of them are actually doing more than okay.

So whether you love to hate it or hate to love it, here's a chronological account of the most incredulous things in this blast from the classically bad Crossroads:

1. Lucy is the Valedictorian of her class.

Britney is mirroring my exact expression when I heard this. That would be like teenage me, all neon yellow bangs and Wednesday Addams dresses, announcing I'm the most popular girl in school — ridiculous. Lucy could barely exercise good judgment when it came to her life, now we're supposed to believe she made valedictorian? Not even five minutes in and you're asking me to suspend a lot of disbelief, Crossroads.

2. Her science project does not make a good case for this.

That is seriously some sixth-grade-level nonsense right there. Side note: Her room decor is literally a giant Madonna poster, horse figurines, and that. This is not normal.

I guess this predates his career as an apple computer.

4. Young Pennsatucky is 18 and pregnant.

Before Orange Is the New Black, Taryn Manning played, you guessed it, a troubled teen.

5. And Zoe's/Kit's makeup is the cherry on top of this scene.

She manages to stay on her high horse while insulting Lucy for being "perfect" (what), even though Kit herself looks like Valentine's Day threw up all over her.

6. MIDDLE-AGED DIONNE FROM CLUELESS, IS THAT YOU?

7. Lucy's dad believes Lucy's going to be a doctor.

Lucy's teacher, who hoped Lucy would go into music, is accurately mirroring my expression when I hear this.

7. Lucy is also going to double major in chemistry and biology.

8. Backpacks are brought to the school dance.

JanSport: The perfect compliment to your formalwear.

9. These two have a LIST of reasons to lose their virginity.

They contemplate this in the random room above the dance reserved for banging, I guess. It's how you know this isn't going to happen. There are well-thought-out and planned first times, of course, but in most, the thought process begins and ends with, "I'm feeling like making a bad decision today."

10. The key love interest has the personality of beige wallpaper.

His name is Ben, and like most guitar players I know, he looks really great at first glance: dark hair, perfect stubble, etc. Take him away from that setting, and he's super bland and kind of sucks.

10. GREASER EDWARD CULLEN, IS THAT YOU?

11. "Lol, hey do you want to travel across the country with me?"

"I'm a pregnant teenager but I'm def going to win this singing contest in L.A. and become super famous. I know we haven't talked in a decade but you should tag along, it won't be weird." Um.

With Ben already looking duller in the daylight.

13. Lucy totals their entire funds for the trip in 10 seconds.

Meanwhile, it takes a full half hour for me to get out my iPhone and divide the bill at Applebees.

14. Since sex sells, they put Preggers at the forefront in a karaoke competition.

I'm not saying that you can't pull a Blake Lively and be a beautiful, radiant creature while with child. I'm just saying that, well, the terms sexy and pregnant are usually seen together on only the darkest corners of the Internet.

It can't be stressed enough that Lucy's "hot" look is to show her washboard abs and a sliver of man boxers, while her friends are stuck wearing giant tigers. All of this feels poorly planned.

17. Even Ben's boner is perplexed.

It totally doesn't know what to make of this.

An Eric Northman cameo would thoroughly salvage this movie, but it doesn't happen.

Comes across like a dramatic reading of See Spot Run, I guess I would take this more seriously if I knew it wasn't written by two dudes and freaking Dido.

EVERYONE ELSE GO HOME.

21. She doesn't drink a cosmo or mention her vagina even once.

No wonder she's so uncomfortable during her two minutes of screen time.

22. Ben is That Guy who breaks out his acoustic guitar at random.

Of course he is.

That's not ... THAT'S NOT HOW COLLEGE WORKS, LUCY, YOU SHOULD KNOW THIS, YOU WERE VALEDICTORIAN.

24. Then Lucy (valedictorian) loses her prized virginity while the blinds are open.

So the seagulls can watch them banging, like we've all imagined how our first time would go.

25. This close-up of Ben's douchebag-marking tattoo.

26. ALL THIS MISPLACED DRAMA.

Apparently Kit's fiancé was the one who raped Mimi and got her pregnant. Kit makes Mimi confront him, and Mimi trips down the stairs, LOSING THE BABY. And this movie has a lot of NERVE, for cranking up the Lifetime and trivializing what is genuinely tragic and horrible.

27. BUT LUCY STILL GETS TO SING HER DUMB SONG.

Lucy, in her journey across the nation, scores a hot guy and auditions in her friend's stead, giving up her entirely plausible career as a doctor. She's kind enough to put her besties in the background, dressed in Kmart's finest.

28. Again, to reiterate, lives were ruined in this journey.

Dreams were shattered, babies were lost, engagements were broken, severely traumatic events occurred. Kit and Mimi are shafted completely. But WHATEVER. Lucy "found herself" and she's probably getting a record deal. One out of three ain't bad.