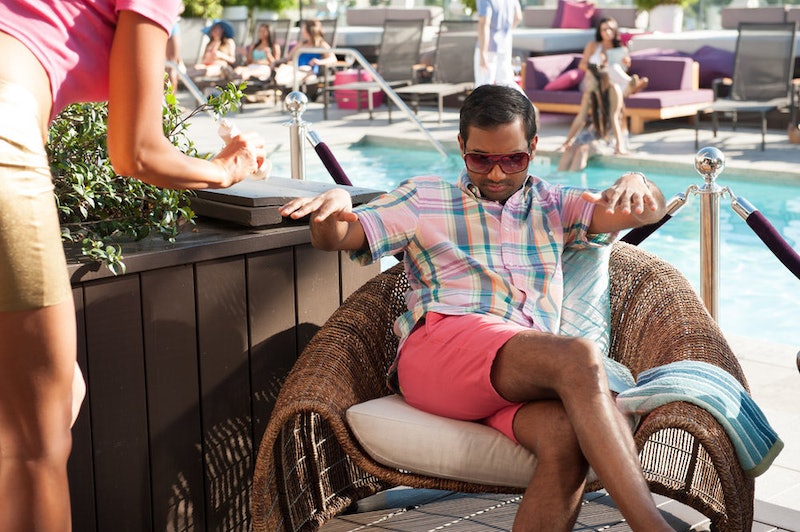 It's become a pop culture phenomenon that I think we should all have in our lives. Parks and Rec 's Treat Yo Self Day, that Tom and Donna created, has been a tradition of the show since Season 4, and Season 7 revisited the tradition for one final time. Because it is the final season, Tom and Donna made this the best one yet with a superbly glamorous trip to Beverly Hills, because this is "the best day of the year." But there was one looming issue that cast a dark shadow over the day. Years after dating, Tom was finally in a position where he and Lucy could rekindle their relationship, but was it actually going to happen?

Treat Yo Self 2017 was the best one yet. Tom and Donna went big this year. After a stretch limo (for two) drove them to the home of Lisa Vanderpump and other Beverly Hills socialites, the two went shopping, got caught by the paparazzi, got their elbows bedazzled, and ate at the most luxurious restaurant in the city (where the sushi is made from fish once owned by celebrities). But there was one thing that Tom was not treating himself to, and that was to matters of the heart, and as Donna told him... when it comes to those, "treat yo self."

Earlier in the episode, Tom asked Lucy to join him at Donna's wedding, but made it sound purely business related. But after his glam getaway, he came back to Pawnee with a different outlook on the situation. After meeting up with Lucy at Tom's Bistro, Tom told her he wanted to take Lucy to Donna's wedding as his date, not as her boss. It was a sweet moment for Tom, because honestly, this guy needs to find happiness in the love department by the end of this season.

Tom has had a few romantic relationships throughout the series, but no one has ever stuck. This time is different though, because Tom really cares about Lucy (he traveled all the way to Chicago to bring her to work with him in Pawnee), and from the way things are progressing, it seems like these two could end up together by the end of the series. Yes, Tom is always going to want to succeed in business, but isn't it time he succeeds in love? Tom, I have three words for you.