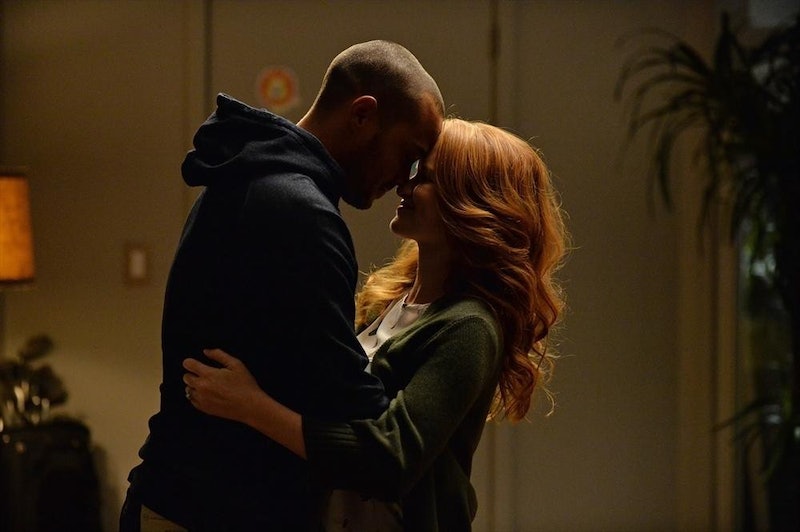 Now that Grey's Anatomy has returned for the second half of Season 11, we are in for a really, really bumpy ride. I seriously wouldn't approach Thursday's new episode without a huge bottle of wine and an even bigger box of tissues, because basically every couple is facing something terrible and heartbreaking, but none worse than Jackson and April. They're about to face the worst possible news: The baby they've been so excited about bringing into the world is in some serious jeopardy. April and Jackson's baby has a potentially fatal congenital disorder, as Stephanie explained in the midseason finale, their unborn son most likely is suffering from a condition that makes his bones very brittle, and most babies with this condition don't live more than a couple weeks. And honestly, I'm kind of mad at Shonda Rhimes for this.

Haven't April and Jackson been through enough? The road to making their relationship actually happen in the first place was filled with obstacles, and now that they've managed to crush them — after watching us suffer through the drawn out storyline between April and her seemingly perfect paramedic boyfriend — this is totally unfair. April may be really annoying at times, but she definitely doesn't deserve this — nor does anyone, for that matter.

Worst of all, Rhimes has hinted that Jackson and April are going to hit a bit of a snag when it comes to their different beliefs. She told TVLine, "For Jackson, who is a man of science, and April, who is a doctor filled with faith, it is going to be a very interesting struggle." That makes me think there will be an option to terminate the pregnancy to save April and Jackson the emotional struggle — not to mention potential risks to her health — of delivering a baby that won't survive, and maybe April's religious beliefs will make her want to continue the pregnancy, while science-minded Jackson disagrees. Of course, I could be totally wrong, but it's a real, extremely difficult scenario that people do face. It'd be a heavy dose of reality, and Grey's Anatomy is famous for doling those out.

The real question here is this: Can Jackson and April's relationship survive a trauma like this? I would like to think so, but with such an intense, emotional situation, I'm not so sure. Rhimes, if you tear these two apart during such a trying time only to bring them back together in some sort of finale, I will never forgive you. I know I've said that a million times before, but this time I really mean it.