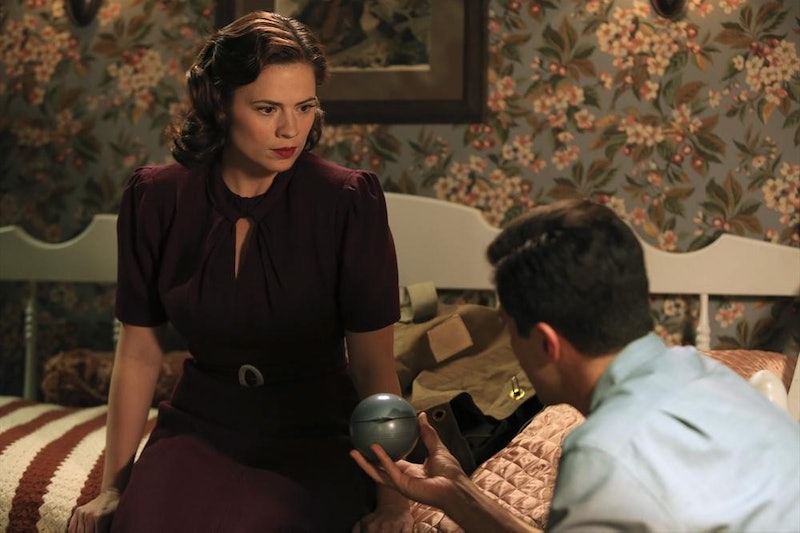 When Howard Stark comes calling, you know he means business and he's going to drop a lot of bombshells. This week, it was revealed on Agent Carter that Stark has Steve Rogers' blood in a tiny vial. The "Blitzkreig Button" was a red herring hiding spot for Stark's personal stash. So a small part of an Avenger is on this show after all. Peggy was upset with Howard Stark, and basically quit her second job as his "corporate spy" right then and there. I have a feeling that she's in too deep to just walk away like that. We'll get to that in a second.

The fight scene between Peggy and Howard was great, but we're ignoring the Star Spangled elephant in the room. That is Captain America's blood. Those are some really important cells and DNA in that vial. Not only did Howard Stark have a vial, but eleven vials went to the US Government. How much do you want to bet that at least one of those fell into the wrong hands. What are they going to use it for? Could they extract the Super Soldier Serum and reverse engineer the formula? That is, as we know, more dangerous than not. The Serum affects its subjects based on their inner nature. Most folks aren't as pure as Rogers, and Agent Carter could end up with a lot of supervillains on her hands superfast.

Are we sure that it would be wrong to clone a couple dozen Chris Evanses, for science? In fact, what Howard Stark suggested sounded an awful lot like stem cell research. He wanted to study the blood and use it to potentially cure diseases and maintaining Captain America's legacy. I know it's kind of a new-fashioned idea and I understand Peggy's frustration with Stark's many lies, but don't you think that's what Steve Rogers himself would have wanted?

I knew something was up with Howard Stark, but this seems so much sweeter than all the nefarious goings on that I had imagined. He clearly cared a lot about Captain America, which makes Steve and Tony Stark's upcoming Civil War all the sadder.

At the end of the episode, Peggy hid the blood in the wall in her apartment. Out of sight, out of mind, right? The Griffith Hotel might seem like the safest place for Steve Rogers' blood at the time, but I have a feeling that something this big won't be so easily hidden away.