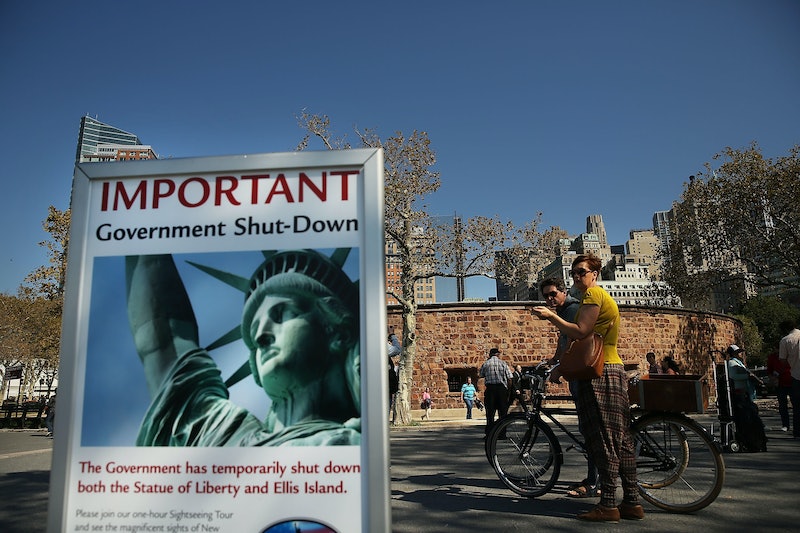 It's day two of the government shutdown and Americans are exercising their constitutional right to vent on Twitter. The shutdown (which is the first to take place in 18 years) is the most dramatic illustration yet of a divided and oft-stalled Congress. With the shutdown, an estimated 800,000 people will be staying home from work, and not getting paid. And while some veterans showed what they thought of the shutdown by busting through barriers at the World War II Memorial yesterday, others are giving Congress a piece of their mind from the comfort of their own couch.

Enter #DearCongress. The hashtag is being used across Twitter for those who want to express their disappointment, anger, (and of course, jokes) when it comes to Congress' decision to shutdown services and leave hundreds of thousands of Americans without pay instead of working out a compromise.

How far we've come: During the last government shutdown in 1995, enraged citizens would've had to do something crazy, like write a letter, or call the office of their representative.

Some #DearCongress tweeters called for resignations over the debacle:

Or alluded to getting Reps out of office:

While others supported the shutdown as a means to protest Obamacare:

Many just wanted to let the world know how the shutdown is impacting the lives of everyday Americans:

Other lamented the very future of politics:

But this Twitter trend could be just the beginning — after all, the effects of the shutdown will likely spread if it goes on past this week.

Government contractors and other private companies that provide services for the now out-of-commission federal government will also be forced to scale back if their major client doesn't return to cutting checks in the near term. According to a survey by the National Association of Government Contractors, 29 percent of contractors said that a continuing shutdown would make them halt hiring plans. Fifty-eight percent of the contractors said that the continuation of the shutdown would negatively impact their businesses. Some workers for private companies who were slated to work at now-closed government agencies are already facing furloughs.

More like this
The Lionesses Are Calling For Equal Access To Football In Schools
By Sophie McEvoy
'The Capture' Is Finally Back – & S2 Looks Tense AF
By Sophie McEvoy and El Hunt
42 Black Owned Fashion & Beauty Brands To Support Today & Always
By Mekita Rivas, Shea Simmons, Kui Mwai and Dominique Norman
UK Black Pride 2022 Just Broke A Major Record
By Sam Ramsden
Get Even More From Bustle — Sign Up For The Newsletter