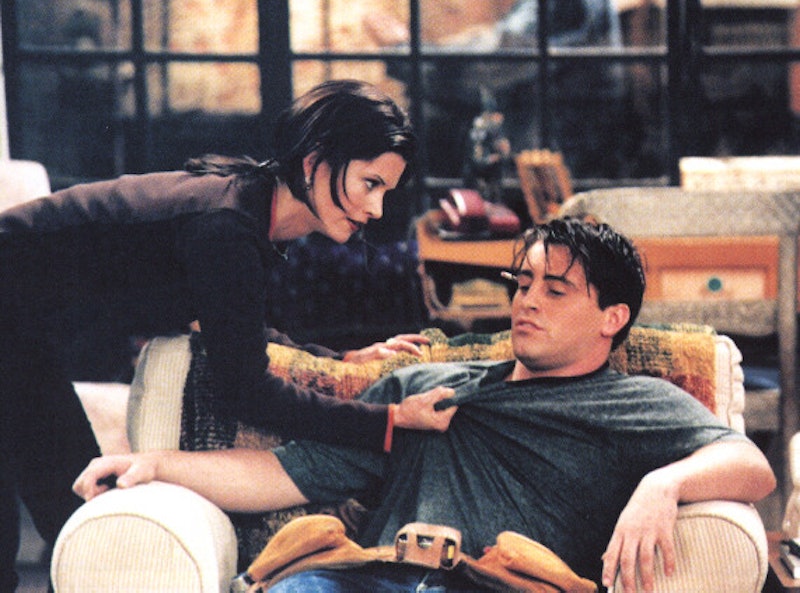 My life has become one long, never-ending Friends binge since the first of January, and, when I'm not watching the sitcom, I'm reading mind blowing articles about it. Like how the Friends couch was always empty all the time, or that the Friends fountain isn't even a New York City fountain. Another factoid I've read about Friends is that Monica and Joey were intended to be the main couple for the series. Clearly that didn't happen, but can we all take a moment to say, "WHAT?!" But it's true. Monica and Chandler or Rachel and Ross weren't supposed to be America's favorite couple. Instead, Monica Geller and Joey Tribbiani were supposed to be each other's lobsters.

The real "epic" couple of the series, Ross and Rachel, clearly made it impossible for the writers to ignore. The chemistry between Jennifer Aniston and David Schwimmer was undeniable, and not having Rachel and Ross be the main attraction of the series would have been criminal to fans of the show and to love itself. But what if Joey and Monica had been the series' epic couple? What would the Friends series be like if Joey and Monica ended up together? Let's explore that alternate universe and see if the show would have been any good.

Monica Would Have Found Joey in the Hotel Room in London

Assuming the two had a similar trajectory as Monica and Chandler, Monica and Joey would have slept together while in London for Ross' wedding to Emily. Here's the rub: If you remember, we actually learn that Monica came to Chandler and Joey's hotel room hoping to find Joey, but instead found Chandler. Could this have been the chance for the two to get together?

Rachel Could Have Moved In with Chandler

If Joey and Monica were married, or at least together, Joey would move in with Monica, which could lead Rachel to move in with Chandler. Would a romance start with these two living together? I don't think so. In fact, I don't see Rachel and Chandler fairing well as roomies, since Rachel always had a short temper when it came to Chandler's sarcastic comments. No one loves those as much as Monica.

Plus, we would totally lose the Rachel and Joey bond. While I think it is A HUGE DISASTER that Rachel and Joey tried to be a thing during Season 10, I did love the chemistry that they had. If Joey wasn't in that position to live with Rachel, we'd have been robbed of those sweet moments.

All I can say is, "Oh. My. God." Can you imagine if Chandler had ended up with Janice? I like my Janice in doses. The once-a-season cameos worked really well for me.

In "The One With the Truth About London," we see an alternative universe of what would have happened if Joey and Monica were together, and it wasn't a pretty sight. Joey apparently have gained about two additional Joeys in weight, and Monica would have absolutely loved serving him a ton of fried food. Plus, Joey's signature "How you doin'?" would be directed toward a fried mozzarella stick.

Chandler Would Have Been a Joey?

Would Joey's slightly immature attitude be transferred over to Chandler to fill the void? Or would Chandler become a ladies man? But the lack of action Chandler got was part of his schtick! What would he do without that?