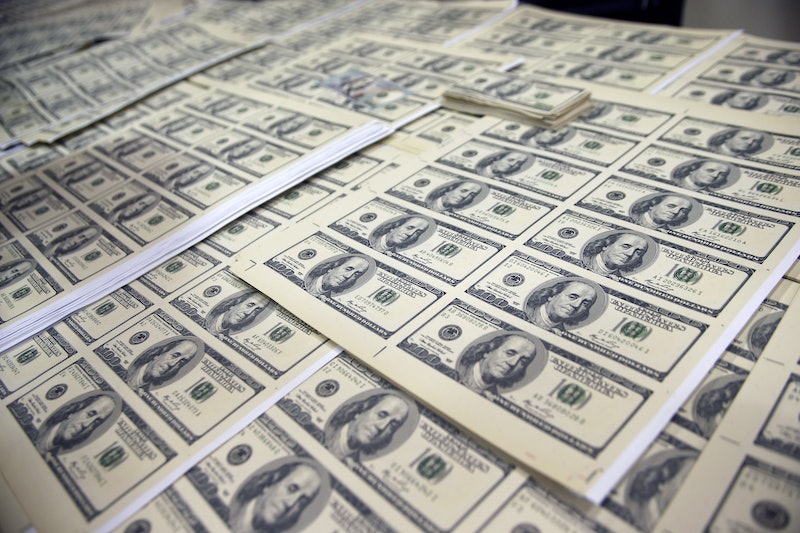 There's no doubt that a gender pay gap still pervades America, but the gap isn't uniform across the country — that's right, even the wage disparity has disparities. It's like inequality Inception, but less fun to watch. According to shocking new data, the greatest gap between wages paid to women and their male counterparts in the United States is almost three times the smallest gender pay gap in the U.S.

A new map released by business site Expert Market, created with data from a fall 2014 report from the American Association of University Women, showcases the differences in average wages between male and female workers across the country, and they are staggering. According to the AAUW, American women make $10,291 less than men on average, and that's not even close to the largest pay gap in the country.

In 2014, women earned 82 cents to every dollar their male coworkers made. Though this gap has been narrowing since the 1970s — 82 cents is up from the meager 78 women made in 2013 — it still hurts every working woman in the U.S. But don't take it from us. See for yourself — how much is gender inequality affecting your paycheck?

The State with the Biggest Gender Gap: Louisiana

On average, women in Louisiana make $16,453 less than men. Louisiana has no state minimum wage, so they use the federal minimum wage. By that standard, women miss out on more than a year's worth of earnings because of the wage gap.

The State with the Smallest Gender Gap: Washington, D.C.

The best state to work in as a woman isn't even a state — it's the District of Columbia, where the average woman makes $5,850 less than the man in the next cubicle each year, perhaps because of the prevalence of government jobs. Is this really something to get excited about? "I live in D.C., I only get paid $5,850 less than a man in the same profession! How great!" Not quite bragging rights...

The Most Average State: South Dakota

The pay gap in South Dakota is $10,290 — just one dollar under the national average.

The Region with the Smallest Gap: Southeast

Workers in Florida, Georgia, South Carolina, and Tennessee tend to have the smallest wage gap, between $5,000 and $7,500.

The Region with the Largest Gap: Midwest

The Midwest doesn't have quite the visibly regional distinction that the Southeast does, but Utah and Wyoming do stand out as two of the largest pay gaps in the country amid an area of lower wage differences. Utah and Wyoming have the second- and third-largest gender pay gaps in the country — after Louisiana — but women in next-door Nevada have the third-lowest pay gap. Which brings us to another category...

Louisiana stands out on that map like a sore thumb. It's nestled between states with pay gaps that don't even come close to Louisiana's ranking — Texan women make $7,000 more than Louisianans — and it's also the darkest on the map. La.'s gap is $574 wider than the next largest gap in Wyoming. And it's a whopping $10,603 greater than the difference in D.C. — 2.8 times as much.

One tiny state with a brighter outlook than the rest of its region is Rhode Island, which ranks #19, compared to its buddy Connecticut, which comes in at a disappointing #46.

So, is there a silver lining to any of this?

To be honest, this is kind of a bummer. For all the progress that feminism has made in the past few years, we still get paid less than men no matter what we do or where we live. And analysts think it might be 75 more years until we finally see equal pay for men and women.

But our President seems to be on our side. It's still possible that President Barack Obama will help take steps to close the wage gap further in the last two years of his presidency. Obama has expressed his passion about solving this problem before. And in his State of the Union address, Obama said we really need to close the gender pay gap, no playing around this time.

"This Congress still needs to pass a law that makes sure a woman is paid the same as a man for doing the same work," Obama said. "Really. It's 2015. It's time."