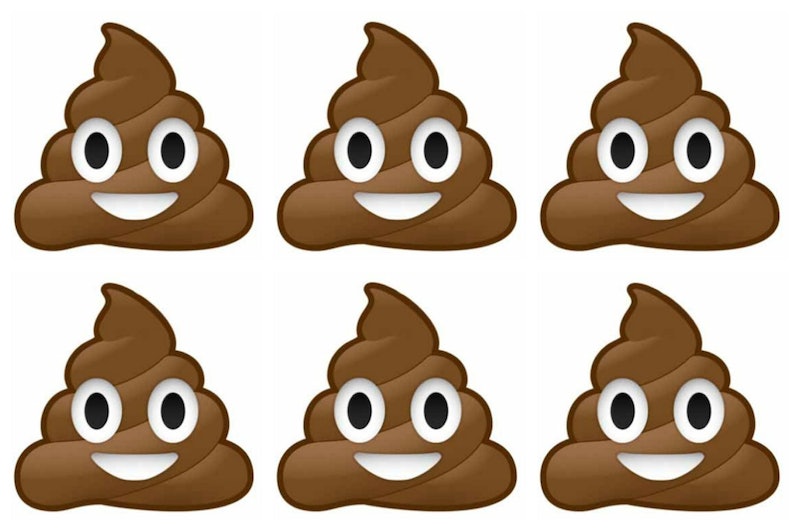 According to WalletHub, roughly 171 million people will watch the Super Bowl on TV this Sunday. Those 171 million people will also be consuming mind-blowingly enormous quantities food during the game... and you know what they say: It's all got to go somewhere eventually. But hey, guess what? Thanks to Poo-Pourri, we know exactly how much we'll collectively eat on Super Bowl Sunday, as well as how much poop we'll all collectively expel afterwards. I believe this is pretty much the exact definition of "too much information"... even if it is weirdly fascinating. No, seriously, you guys — this is quite possibly the weirdest infographic I've ever seen, and yet I still can't stop staring at it. Odd, no?

Poo-Pourri, you'll recall, is a fascinating little spray that you spritz in the air before you do your business to neutralize any odors that may arise. Originally it was marketed specifically at women; I'm not totally sure why that was the case (beyond an exploitation of the commonly cited piece of misinformation claiming that girls don't poop), as I can imagine it being useful for all people, but, well... I suppose stranger things have happened. In any event, though, Poo-Pourri's contribution to the wide array of Super Bowl coverage currently floating around on the web comes in the form of an infographic via the Huffington Post. If you've ever been curious about how many nachos get gobbled on game day, here's your answer.

Regardless as to how you feel about Poo-Pourri itself (love it? Hate it? Couldn't care less about it), you have to give them credit for finding such a creative way to tie their product into the Super Bowl. In fact, it might be even considered especially timely: The sheer number of Super Bowl parties that will be commemorating the event will inevitably result in an unusually high number of people going in and out of bathrooms that don't belong to them. I'm all for pooping as loudily, stinkily, and freely as you have to when you're in your own home, but it might be an appreciated measure of courtesy while using someone else's toilet if you have something on hand to keep the commode fresh. Or, well, fresher. There's only so "fresh" a communal toilet will be after being used by 20 people continuously over the course of a day.

Anyhoo, check out some highlights below, and head on over to HuffPo to see the whole graphic. It's a doozy. You have been warned.

Head on over to HuffPo for more.

More like this
8 Money Saving Experts To Follow For Accessible Advice
By Maxine Harrison
TikTok’s Viral Tunacado Sandwich Is The Internet’s Favorite Lunch Right Now
By Alexis Morillo
How Long Does Leftover Stuffing Last? Here's When To Toss It
By Chelsey Grasso and Alexis Morillo
Pepsi’s Festive Flavour Is Finally Coming To The UK
By Sophie McEvoy
Get Even More From Bustle — Sign Up For The Newsletter