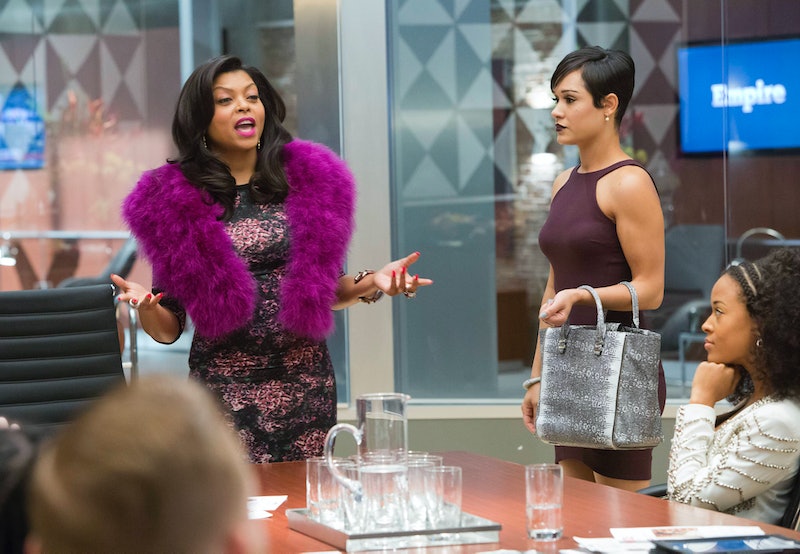 Lucious Lyon may be dealing with his ALS diagnosis, an upcoming IPO, possible murder charges thanks to killing Bunkie, naming his successor and so much more on Fox's newest hit series Empire, but his biggest stress will probably come from the two powerful women in his life. On Wednesday night's episode "False Imposition," Cookie and Lucious once again proved to be getting closer together as Lucious forced Hakeem to work with Cookie to fix his music and Cookie helped Lucious secure some new talent for the label (along with help from his awesome assistant Becky). The former couple may want to eventually light that flame once again, but of course, Lucious' current flame Anika won't be letting go without a fight. And Lucious himself doesn't look ready to let her go as in the promo for the newest episode "Dangerous Bonds," Lucious proposes to Anika. So is there a real love triangle brewing in the Empire? Things are seemingly moving in that direction.

It's also way too difficult to ignore the spark, determination and ambitious spirit that Cookie possesses. On "False Imposition," Lucious and Cookie sat down to celebrate their successes and two agreed that when they worked together, they made each other better. Lucious even tried to explain to Cookie that while she was in prison, he never forgot about her and her sacrifices. Clearly Lucious still cares a great deal for his first love. Will that compassion become something more once again?

But then again, Anika clearly plays a major role in Lucious' life. He revealed to her that he has ALS and she understands now why he is working so hard for the company's IPO and to pick his new successor. And Lucious is finally proposing to Anika in "Dangerous Bonds," and she clearly says yes. The promo shows Cookie looking pretty upset about this news, though is it because she still loves Lucious? Or is it more because she hates Anika and knows that she will throw this in Cookie's face or worse, get more power in the company and continue to try and push Cookie out? I'm going to believe it's the latter since Cookie's main focus on the show at the moment is get what's rightfully hers at Empire and to make Jamal a star.

And oh yea, Jamal plays heavily into the fate of Cookie and Lucious' potential reunion. At this moment, Lucious is terrible to Jamal. He's a terrible father, he's a terrible boss and he doesn't believe Jamal could ever be worthy of running his company or making anything of himself as a performer. Cookie's biggest obstacle with Lucious is over the treatment of Jamal and if the father-son relationship won't change, I just don't see Cookie wanting to ever be with Lucious without a family reunion along with the couple's reunion.

To be honest, what would really be the absolute best and most surprising move that the series could make is if Anika and Cookie find a way to actually work together and maybe like each other. Perhaps after Jamal puts out his sure-to-be brilliant new album, Anika sees how great it is but Lucious, of course, does not thanks to his never-ending disapproval of Jamal. Maybe Anika decides that working with Cookie to put out Jamal's album is the best move for Empire. Maybe Hakeem is taking on too many of the negative traits of his father and even Anika can't stand it. I would absolutely love to see two powerful women on top at the company over some man who is King Lear-ing his sons to hate each other and destroy each other for his company. Two powerful women should be in charge. That's the Empire I want to see.

More like this
'The Last Of Us' Episode 4 Put Twitter Into An Emotional Spiral
By Alyssa Lapid
'The Last Of Us' Episode Schedule Competes With The Super Bowl & Oscars
By Brad Witter
Grammys Host Trevor Noah Made Adele's Dream Of Meeting The Rock Come True
By Brad Witter
Pedro Pascal Barely Got Through The "Lisa From Temecula" 'SNL' Sketch
By Stephanie Topacio Long
Get Even More From Bustle — Sign Up For The Newsletter
From hair trends to relationship advice, our daily newsletter has everything you need to sound like a person who’s on TikTok, even if you aren’t.