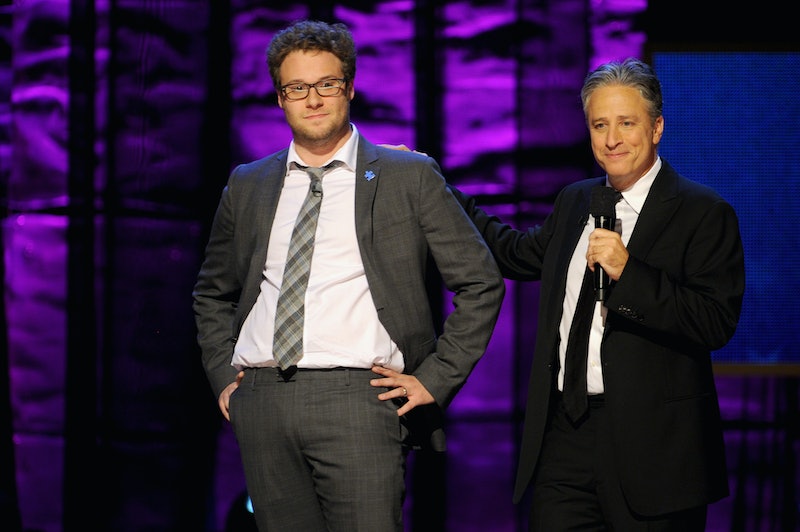 If there's one thing that both ultra-Orthodox and secular Jews can agree on, it's that being inherently Jewish has little to do with your level of observance. In New York City, most people (possessing vaguely Semitic features or not) have been approached by Chabad emissaries loitering around New York City subway stops, and asked "Are you Jewish?" at one point or another. (Jewdar, like gaydar, it seems, is based on intangible characteristics.) For many Jews stopped and asked that question, the answer may be: "Yes I am; and no, I don't want to say a prayer."

That's why a new Pew Forum survey released earlier this week surprised absolutely nobody when it found that one in five Jews are atheists, but still consider themselves Jews. Because that's like, duh. In other ground-breaking and potentially stereotype-perpetuating news, Jews are wealthier than the general public (25 percent of Jewish households make more than $150,000, compared to eight percent of the general public), and are particularly concentrated in the Northeast (43 percent).

But those aren't the interesting findings.

Secular Jews always have and always will be a part of Judaism — or Jewishness, if we want to step away from faith. The most interesting findings of the survey are buried, and have to do with demographic transitions within Jewish communities. The survey found that, among the three major Jewish religious movements (Reform, Conservative and Orthodox — sorry, Reconstructionists,) "most of the switching is in the direction of less-traditional Judaism." Only 48 percent of Jews raised Orthodox identify as such today, compared with the 55 percent of Reform-raised Jews who still consider themselves part of the denomination. Those trends are likely even more exaggerated with millennials, who are less likely than any other Jewish age group to claim a belief in God.

In other words, the news is that religiosity is falling, and that Orthodox Jews are not (as has previously been suggested) out-breeding and out-numbering other Jews by a mile. But as the secular and non-religious among us break out onto the forefront — one in five isn't much, but if trends continue the non-religious will be a third of all Jews in no time at all — Jews will have to define what it means to be Jewish for the rest of the world. And that’s easier suggested than done.

So how are Jews today defining their identity? 62 percent of survey respondents, both religious and not, said that Jewish identity was primarily about a shared ancestry and culture, not necessarily religion. What that means, exactly, isn't clear, since Jews from Kurdish Iraq have little in common with Ashkenazi Jews from the States. But it's probably safe to say that in general, it's a shared history of being in the minority and facing oppression.

The twentieth century probably cemented this conception of a non-religious Jewish identity. In the former Soviet Union, code-words for "Jew" ("rootless cosmopolitan") applied whether or not you believed in God. Nazis didn't target Jews by singling out those in black hats. McCarthyist rhetoric, too, didn't see Jews as a religious group, but more as a political threat. These concrete events might be fading into memory, but the mentality they created is not: 56 percent of respondents in the Pew study said working for justice and equality is an essential part of Jewish identity. (Even more identified it with remembering the Holocaust, or living a good and ethical life.)

But American Jews aren’t exactly marginalized anymore, and as the events of the last 100 years fade more and more into the background, calling ourselves an oppressed people — rather than a people with a history of oppression — is likely to raise a few eyebrows. After all, we’ve got more than our share of representation on the Supreme Court, as well as politics, pop culture, and business. So what does it mean to be Jewish, without using religion as a crutch? And will the decline of religious Jews lead to the decline of Judaism?

The answer to the latter is, probably not. Jews joke that Judaism is bagels with lox, Chinese food on Christmas, and reading the latest issue of The New Yorker. It's Jonathan Safran Foer's New American Haggadah , with just as many snooty intellectual references as religious or cultural substance (after all, 49 percent of Jews said that intellectual curiosity is central to Jewish identity). It's also getting wasted on the holidays.

But being Jewish is also something even more intangible, something that's hard to quantify but is a mix of the past, the present, and the future. It’s something that explains the difficult, conflicted place of converts in Jewish communities, and why someone who never became bat mitzvah but was born to Jewish parents can make aliyah to Israel without a problem, while a convert must abide the Orthodox letter of the law.

Maybe the reason the survey — or Jews more generally — can’t tell us what it means to be Jewish is because it's something that each Jew feels but can't quite categorize.

But since Jews of all stripes also identify with a sense of humor (42 percent, placing its importance just below that of Israel, and well above that of Jewish laws or communities), we'll let the Daily Show take the last stab at explaining what Jewishness is. After all, Jon Stewart is the closest we've got to the Messiah so far: