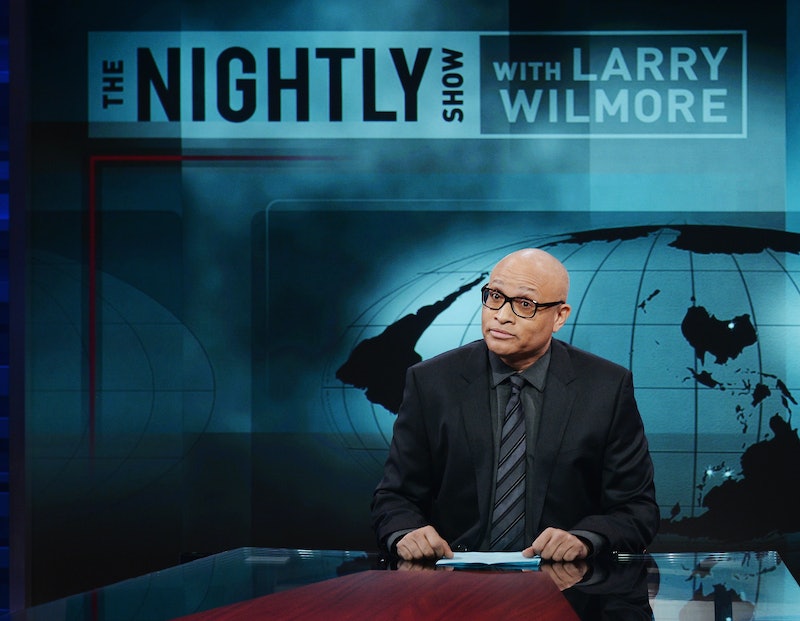 He's been hosting The Nightly Show for not even two weeks now, but it's clear why Larry Wilmore got Stephen Colbert's old time slot. Wilmore's already proven he's a different kind of host than Stewart or Colbert or fellow Daily Show alum John Oliver (who is fantastic in his own right). The Nightly Show — originally called The Minority Report — addresses, as was expected, controversial, often uncomfortable racial issues and tensions in a daring way, especially with its roundtable discussions with comedians, reporters, and experts alike.

For the upcoming Feb. 6 issue of The Hollywood Reporter, Wilmore gave an interview about his experience hosting his own show, and spoke candidly about Bill Cosby and the whiteness of Hollywood among other things, further cementing the fact that his show is going to be an important one.

On his second episode, Wilmore addressed the allegations of sexual assault brought against Cosby, saying frankly in his opening, "That f--ker did it." It's that brazen comedic energy and unabashed presentation of his personal bias that's so refreshing. He's not even pretending to be objective, and that's OK. In the interview with THR, Wilmore said of Cosby:

He's referring here to the segment on his show "Keeping it 100" which forces panelists to tell the absolute truth. Whether they do or not, the audience and host Wilmore decide if their answers are authentic. Wilmore definitely keeps it 100, and he went on to talk about his thoughts on the Selma snub in the Oscars race (and The Lego Movie snub, too):

I actually was genuinely upset that The Lego Movie was not nominated. I love that movie. [As for Selma,] it's hard to get me outraged over stuff that happens all the time. I think it's part of my comic point of view... awards? They're esoteric and nebulous, and it's not the same as making sure that Ava DuVernay, a black female director, gets a shot at making a movie. That, to me, is more important; the other stuff is gravy.

Wilmore both seems aware of his position and responsibility as a late night host to address these controversial issues, and unwilling to temper his strong opinions. Is that risky? Yes, but it also makes for an amazing half hour of television, as we've seen so far. And it's not just race issues that he's addressing, but general issues in politics through the lens of an African-American perspective. On Wednesday night's show, for instance, Wilmore exposed just how ridiculous the scope of the Koch brothers' political donations have been. Known as dark money, Wilmore said: "I don't know why they call it dark money when it's really white privilege money." This kind of aside seems like it would be just as natural for Wilmore to say to a friend at a bar as it does to an audience of a million viewers, and that's why we're lucky to have his unique perspective in a late night slot.