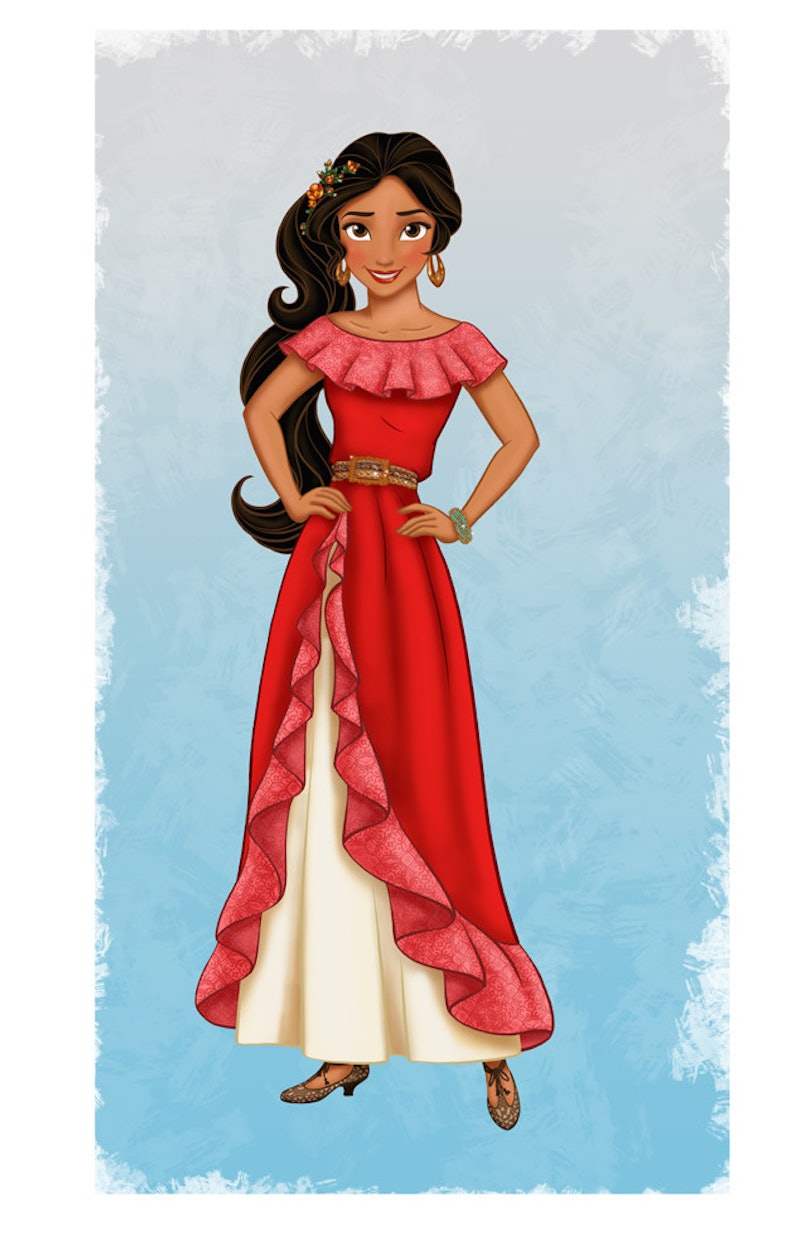 If you hear something that sounds a lot like incoherent screaming, don't worry. That's just me. You see, on Thursday, we got our first look at Disney's first Latina Princess, Elena of Avalor, and she. Is. Awesome. When I'm not busy ranting about feminism, I'm usually ranting about diversity and Disney is one of the biggest offenders as far as that is concerned. The Disney princess roster is still overwhelmingly white and, with diversity as one of the hot button issues that the world is paying attention to, that seems like a real tragedy to me. I grew up on Disney movies, but it wasn't until I was almost 20 that Disney gave me the first black princess in Tiana. Elena of Avalor represents an important change — but I already want to see more.

You see, Elena shows up as a guest star in a Very Special Episode of Sofia The First, a Disney series starring, you guessed it, a Caucasian princess. After that appearance, she will then go on to headline her own television series called Elena of Avalor, set to premiere in 2016. According to Executive Vice President and General Manager of Disney Junior Worldwide, Nancy Kanter: "Our creative team has delivered a universal story with themes that authentically reflect the hopes and dreams of our diverse audience. What excites us most is the chance to use distinctive animation and visual design to tell wonderful stories influenced by culture and traditions that are familiar to the worldwide population of Hispanic and Latino families and reflect the interests and aspirations of all children as told through a classic fairy tale."

Excuse me, I think I have tears in my eyes from how beautiful that was. Seeing Disney put forth the effort to diversify, and seeing them go so far as to give their first Latina princess her own television series before they've even "tested her out" with the audience in her Sofia The First episode, is so important, whether you're Latina or not. It's Disney taking another step toward creating an overreaching universe in which everyone can find a place, can see their experiences reflected, can have a hero that looks just like them. I mean, I got choked up watching The Princess and the Frog because I was that happy to have a princess who looked just like me and I was 19 years old in a theater full of children. I have no shame about this.

However, while television presents an amazing platform for Disney to diversify their line up by adding princesses of color without having to spend the decades of animation that go into your average Disney movie, that's no replacement for diversify Disney films as well. As you can tell from Sofia The First, princesses from Disney Junior television shows are not technically considered part of the Disney Princess line-up. In contrast to the likes of Mulan or Aladdin, which can be enjoyed by anyone of any age — an, even has some hints that you can only get when you're older — Sofia The First and other such shows are solely meant for kids. Which, quite honestly, is not a bad thing. Remembering how isolated I felt in my Disney childhood, it warms my heart to know that Latina and Latino children can now grow up with a program that stars a princess of their skin color.

I just don't want this to be a band-aid on the epic wound that is Disney's lack of diversity. I want them to take the risk of spending decades laboring on a movie that might not do as well at the box office as, say, Frozen. Big Hero 6 and The Princess and the Frog were nowhere near the smash hits for Disney that Frozen was, but they gave representation to people of color who can almost count on one hand the number of princesses of color that make up the 14-princess line up (with Elsa and Anna included, of course). I want the Disney film canon to have princesses from all over the world, starting with Moana and maybe avoiding countries with Caucasian princesses entirely for a while to give spotlight to lesser known cultures. I don't want any other children to grow up like me, waiting until they are 19 to go to the theater to see the first princess who looks like them. Not when we can do something about it starting now. Starting with Elena of Avalor.