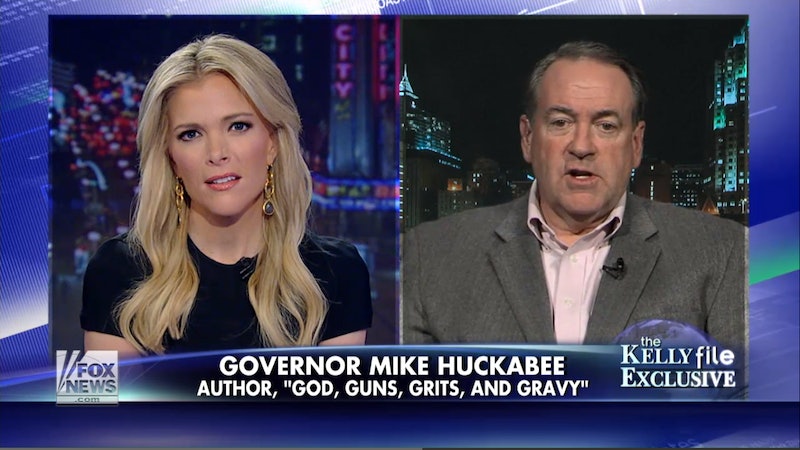 On Wednesday, Politico caught fire after publishing a piece that incorrectly claimed former Arkansas Gov. Mike Huckabee had called his female Fox News colleagues "trashy" in his new book, God, Guns, Grits, and Gravy. After Huckabee blasted the news site for its inaccurate reporting, editors issued a correction stating Huckabee was referring to women in New York, not his colleagues, but Huckabee wasn't exactly off the hook. During a surprising interview on Fox's The Kelly File later that evening, host Megyn Kelly set the record straight, telling Huckabee that women did more than just swear — they also drank, smoked, and had premarital sex (much to the chagrin of the former minister).

In a Jan. 23 radio appearance to promote his book, Huckabee had spoken with host Jan Mickelson about the foul language of women of New York, saying:

In New York, not only do the men do it, but the women do it. You just are looking around saying, "My gosh, this is worse than locker room talk." This would be considered totally inappropriate to say these things in front of a woman. And for a woman to say them in a professional setting, we would only assume that this is is a very, as we would say in the south, "That's just trashy!"

Critics took him to town. Even after Politico had revised its piece to include correct quotes, many were still angered by Huckabee's accusations. In defending his original statement, he told Kelly on Wednesday night:

I wrote a chapter called "The Culture of Crude". It's not directed to any particular person ... I never said anything about the women of Fox News ... What we have now is a culture that is just explicitly crude and it's intentionally crude.

But as hard as Huckabee protested, Kelly wouldn't budge, explaining,

I do have news for you ... we [women] are not only swearing — we're drinking, we're smoking, we're having premarital sex with birth control before we go to work and sometimes boss around a bunch of men.

Laughing uncomfortably, Huckabee replied that he "didn't want to hear" such things, to which Kelly responded, "I'm sorry, that's just the reality, Gov."

Kelly, a former attorney, isn't one to back down from a fight, and her feminist-friendly responses have sometimes drawn criticism from her widely conservative viewership. After former CNN political contributor Erick Erickson made a comment praising traditional gender roles (saying that men are dominant and women submissive because of "biology") on Fox Business' Lou Dobbs Tonight in 2013, Kelly invited him on her show and tore his argument to shreds.

"What makes you 'dominant' and me 'submissive', and who died and made you Scientist-in-Chief," asked Kelly. Stuttering, Erickson responded with a broken string of non-facts about the animal kingdom and made-up arguments about angry feminists.

Look at other animals: the male of the species tends to be the protector, the dominant one in that regard. We've gotten to a point in this country where you've got a lot of feminists who think that male and female roles are completely interchangeable, that there is no need for a man to support his family.

(Someone should really tell that to lions, penguins, elephants, Komodo dragons, honey bees, hyenas, orcas, and other species that don't follow Erickson's line of thinking.)

There is plenty of data to suggest that children of working moms wind up just as healthy and able to thrive in society as the children of stay at home mothers.... You're judging [working moms]. You are. You come out very clearly and say that women who choose to work instead of staying at home to nurture their children ... are imposing a worse future on [them]. Just because [there are] people who agree with you doesn't mean [that's] not offensive.

In the past, Kelly has also come out in support of working mothers' right to paid maternity leave. In August 2011, she lambasted radio host Mike Gallagher for calling her maternity leave "a racket" on his show, arguing that paid maternity leave was absolutely necessary and citing the fact that the United States is the only country that does not require employers to offer it. Gallagher, taken aback by her aggressive tone, shrugged off his statement by claiming that he had been "drinking that day."

For the most part, Kelly tends to stay within the conservative bounds of her mother network, Fox News — but guests should be wary of getting too comfortable in their arguments. The woman who took down Dick Cheney's Wall Street Journal op-ed in in June 2014 (insisting, "Time and time again, history has proven that you got it wrong in Iraq, sir," when Cheney pointed the finger at President Obama) and correctly predicted Obama's re-election in 2012, despite former Bush advisor Karl Rove's insistence to the contrary ("Is this just math that you do as a Republican to make yourself feel better, or is this real," she quipped when Rove began incorrectly analyzing exit poll data), won't go easy on you no matter what side of the fence you're on.

More like this
At 14, Tatiana Maslany Was Obsessing Over Tamagotchis & The Spice Girls
By Gabrielle Bondi
Beyoncé & Madonna’s “Break My Soul” Remix Honors A Group Of Black Icons
By Stephanie Topacio Long
Scotland's First Period Dignity Officer Has Sparked Backlash
By Darshita Goyal
'The Capture' Is Finally Back – & S2 Looks Tense AF
By Sophie McEvoy and El Hunt
Get Even More From Bustle — Sign Up For The Newsletter