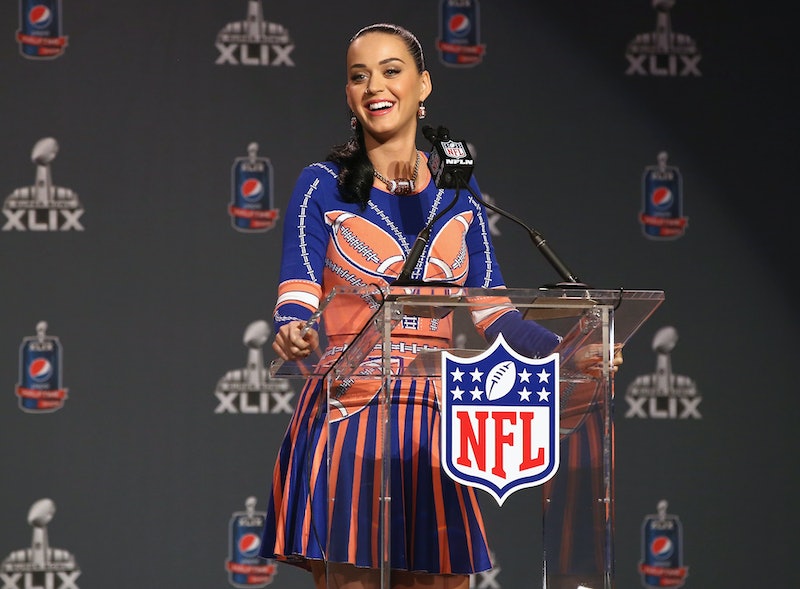 When news broke that Jeremy Scott would be designing Katy Perry's looks for her halftime show at the Super Bowl, we knew we were in for a colorful surprise. Between her cupcake bustiers, Hello Kitty prints, and cotton candy and cake themed outfits, Perry never ceases to give us a performance. And this Sunday, if you're lucky enough to be watching on a Samsung Smart TV, LG TV, or Roku streaming system, you can buy Katy Perry's Super Bowl looks in real time. That's right—what's more exciting than shopping while watching? A championship football game? I don't think so.

During her show, viewers will be able to hit the "buy" button on four exclusive Perry-branded items that she'll be promoting during the event. But don't fret—you can still shop some of her looks by following @pepsi and @Visa on Twitter, who will use Twitter's "Buy Now" feature. YouTube and Shazam will also follow, opening up the shop for viewers without a smart TV (me). And within a matter of days, these exclusive pieces will come right to your door. It's like killing two birds with one stone. I'm being productive, right?

And you can thank Delivery Agent for upping your style game. They're the same brains behind Super Bowl 2014's sale of David Beckham's line for H&M. Seems as if TV commerce is beginning to grow and stick—after all, the Super Bowl is the most watched event on television. While the players are getting a break, why not take one of your own from the glutinous snacks (I'm looking at you, buffalo wings) and get yourself some cool apparel?

More like this
Most Comfortable Underwear For Big Butts
By Audrey Williams
42 Black Owned Fashion & Beauty Brands To Support Today & Always
By Mekita Rivas, Shea Simmons, Kui Mwai and Dominique Norman
11 Graduation Guest Outfit Ideas To Wear To Someone Else’s Ceremony
By Phoebe Avison and Claire Fox
15 Stylish #Tenniscore Outfits To Rock On & Off The Court
By Dominique Norman
Get Even More From Bustle — Sign Up For The Newsletter