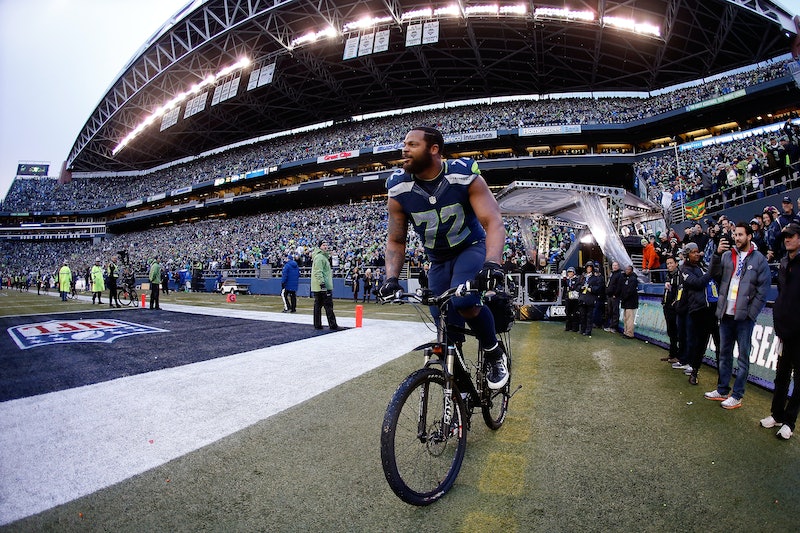 A lot of the time, athletes wind up in the news for truly awful things — trash talk, marital affairs, rape charges, general greed, arrogance. But every once in a while, a story stumbles across the radar that makes the public as a whole say "Awww." With the Super Bowl coming up on Sunday, it would be easy to paint each team's roster as lumbering macho-men intent on destroying one another, but that simply wouldn't do them justice — not when a number of Seahawks and Patriots players have such incredibly diverse life stories and accomplishments outside the world of sports.

For example: one could laundry list all of Patriots defensive lineman Vince Wilfork's stats and numbers, tally-up his consecutive games played, or cite his first round draft pick in 2004, but then they'd be dismissing the fact that Wilfork pulled a woman from a flipped car a little over a week ago, or the gold chain locket he wears around his neck to remember his parents, who died in 2002 only a few months apart. And you probably would have missed him telling the story of how, after stealing a pair of shoes in the ninth grade, a teacher pulled him aside and told him to change his life for the better, inspiring him to make his dream of playing in the NFL a reality.

Wilfork isn't the only Super Bowl player with an interesting history either. Dig down far enough and you'll find yourself neck deep in some pretty amazing stories.

At the age of three, Derrick Coleman was diagnosed by the family doctor as virtually deaf in his left ear. By the time he had entered first grade, he was wearing bulky hearing aids in both ears to amplify sound. Unfortunately, kids can be cruel. Whenever his classmates began taunting him ("four-ears" being their insult of choice), Coleman would simply turn down his hearing aids and tune them out.

"That's the one good thing about having 'em: you guys have to actually listen when somebody's talking. I just turn 'em off," he told ESPN in an interview last January.

Although the bullying became worse (his mother, May Evans, told ESPN that a group of five children "double-teamed him and jumped on him [on the playground]" at age nine), Coleman went on to join a local youth football team and was able to work out his frustration on the field rather than in the hall. By his senior year in 2006, Coleman had mastered the art of lip-reading and was one of the top high school running backs in southern California, courting recruitment offers from San Diego State, USC, and UCLA. And though his NFL career got off to a rocky start, in the 2013 Seattle season opener against the San Diego Chargers, the kindhearted rookie caught his first regular season touchdown pass as a professional player.

The Kingston, Jamaica, native isn't just a star football player — he hails from a seriously talented family as well. Chung's mother, Sophia George, was a hit recording artist whose single, "Girlie, Girlie" topped the music charts in 1985, and his half-brother, Brian Carey, is a former ballet dancer, choreographer, and the founder of New York City's Collective Body Dance Lab, a think tank for new dance performance.

Chung cites his vibrant childhood full of swimming lessons, soccer games, and his mother's musical interests for the reason he and wife, Cecelia, founded his charity, Chung Changing Lives. "The goal of CCL is to cultivate healthy lifestyles and active civic participation by ensuring that children have equal access to character-shaping experiences," they write on the website. In an interview with ESPN, Chung talked a little about the motivation behind the establishment:

Some kids are less fortunate. Others, who are fortunate, lack in other areas. We're here to help children through education, sports, the arts, after-school programs to keep kids out of trouble. Whatever we can do.

In a comment during one of the foundation's "pep rallies" last July, Chung added:

Because [my parents] followed their passions, they were able to give me the opportunities I’ve had to succeed. I’m thrilled we can offer the same opportunity for [other] students to follow their passions.

When Seahawks defensive end Michael Bennett showed up to a media event on Jan. 25 wearing a giant white cowboy hat, the press was in a tizzy. But when they learned about the reason behind the Bennett's odd fashion choice, the attitude in the room shifted from curious to sentimental.

In a statement to the media, Bennett explained that the hat had belonged to Mark Alexander, the father of childhood friend and a youth mentor who had recently died of cancer:

He was ... a mentor to a lot of kids around my neighborhood. When he died, he had more than 500 people show up at his house. Even the funeral last week, there were so many kids that had grown up and done so many different things.

This was his favorite hat. He grew up in Texas, lived in New Mexico -- lived all over -- so he spent a lot of time doing the rodeo and everything, so he loved this hat. His wife gave it to me and I said I'm going to wear it the whole week.

Football might be America's favorite pastime (or second-favorite, if you ask baseball fans), but that doesn't mean all of its players are actually American.

Born in Düsseldorf, Germany, Patriots offensive tackle Sebastian Vollmer spent the first 14 years of his life not playing football, opting instead for soccer practices and swimming lessons. By the age of 16, however, Vollmer had joined up with his prep school's team and helped carry them to two national championships.

While practicing with a German all-star team in San Diego that same season, Vollmer caught the attention of college recruiters who eventually convinced him to sign on scholarship to the University of Houston. Vollmer, who spoke barely any English, spent what little free time he had studying the alphabet and vocabulary to try and keep up with his American teammates. He confessed in an interview with ESPN in 2011 that any frustrations he experienced melted away the minute he stepped foot on the football field:

One of the good things about playing was that the terms weren't foreign to me there. All the playbook stuff was like learning English and the conversations on the field were short and simple. Now when it came to sitting in the locker room and talking about dinner plans -- that was a different story.

Eventually, Vollmer was able to ease into his new surroundings and, in 2009, captured the eye of Patriots offensive line coach Dante Scarnecchia, who made sure that Vollmer was picked up in the second round of the 2009 NFL Draft. In an interview with the Houston Chronicle on Wednesday, Vollmer reminisced about his journey to the top:

It wasn’t always easy, but it was a great experience. Looking back, I loved every minute of it.