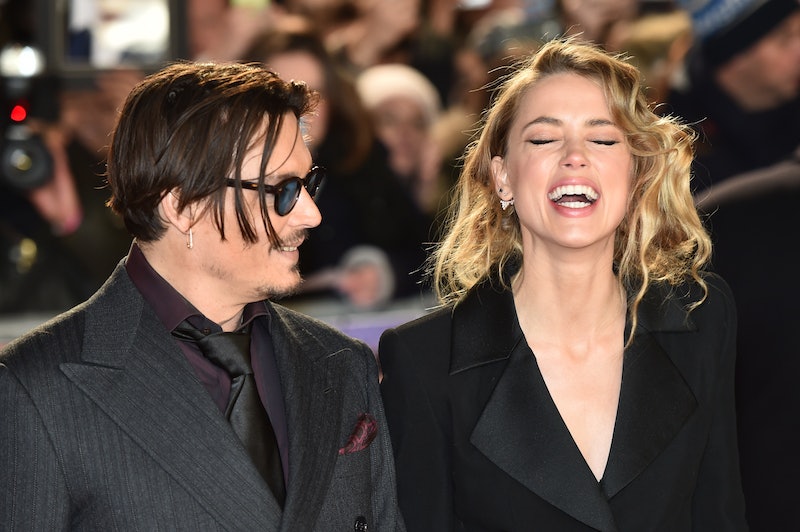 For those of you who have been wondering when Johnny Depp and Amber Heard are getting married, it sounds like the end (or the beginning, if you're end to that corny "it's the beginning of our lives" stuff) is near. According to Page Six, Depp and Heard are planning to get married on the weekend of Feb. 7-8, and judging by the supposed details of the ceremony, it sounds like it's going to be a really good time. I'm talking, a Caribbean paradise-level good time.

As Page Six reports, the wedding will take place at Depp's Little Hall’s Pond Cay home. After doing, like, six seconds of research, I found that Little Hall's Pond Cay is his private island. Like, he doesn't just have a home there. HE HAS THE ISLAND. That's what Pirates of the Caribbean money (appropriately) gets you, I guess. Reportedly, "The island has six beaches, which are named after Depp’s children, [his ex Vanessa] Paradis, and his close friends Hunter S. Thompson and Marlon Brando." WHAT THE EFF IS THIS PLACE?! In the words of the wise Liz Lemon, "I want to go to there."

The ceremony is said to be a fairly small one with around 50 people attending including Depp's children with Paradis, 15-year-old Lily-Rose and 12-year-old Jack. Ya know, the kids that have private beach islands named after them. In other news, Heard will reportedly wear a dress made by designer Stella McCartney. Fancy! Will her father Paul McCartney be in attendance? Probably, because this wedding sounds nuts.

A source who spoke with Page Six says that the reason the wedding is happening now is because of Depp and Heard's intense work schedules: "She’s filming a movie in London, and he’s getting ready to film the next Pirates of the Caribbean in Australia. So this is the only time that everyone could get together." Just your usual last minute Caribbean island wedding so you can both get back to making millions of dollars. Nothing to see here.

As for whether this wedding will really take place on Feb. 7 or 8, we'll have to wait and see. And by see, I really, really hope we do get to see something. These two are pretty private, but after hearing all of this, I'd really like one quality pic of the bride in her Stella dress standing on Hunter S. Thompson beach.