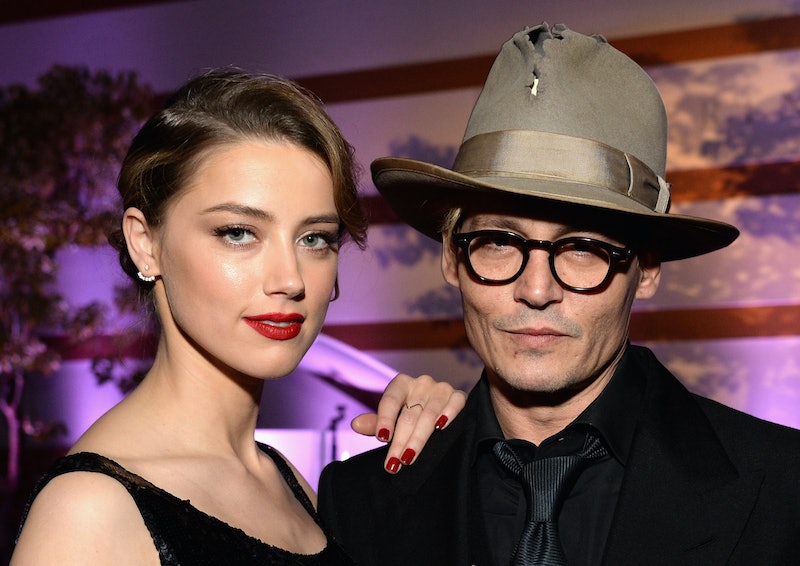 It's been almost a year since Johnny Depp's engagement to Amber Heard became public, and there's been no wedding in sight. What gives? There are few things better than a celebrity wedding, and knowing Depp, his would be very intriguing. I was looking forward to an unusual, Tim Burton-esque ceremony and reception, but it seems like the waiting will never end. In fact, it appears that Johnny Depp and Amber Heard have yet to pick a wedding date, and if they have, they definitely don't want us to know about it.

If you absolutely must have a date to add to your calendar, Heard and Depp are reportedly thinking about tying the knot in December. This would make a lot of sense, since their engagement may have happened over the holidays last year. Plus, how gorgeous are winter weddings? I hate cold weather, so I would never have one, but I love seeing other people say their vows surrounded by snow, because snow is magical. Unfortunately, though, that's just about all we know about the wedding — and it's killing me that there aren't more details out there!

Of course, the rumor mill has plenty to say about the reason why we haven't seen Heard out and about dress shopping, although we should probably take this intel with a grain of salt. Apparently, Depp's ex Vanessa Paradis is up in arms about the fact that Depp isn't asking Heard for a prenup, which has caused the wedding planning to come to a screeching halt. Another rumor is that James Franco is trying to come between them, and that's even more ridiculous.

Knowing how Depp likes to keep his private life private, the most likely reason we haven't heard much about their upcoming wedding is the fact that the couple is trying to keep the whole thing under wraps for as long as possible. There are two types of people in this world: There are people like Kim Kardashian and Kanye West, who invite the E! cameras to document their wedding and have a guest list a mile long, and then there are the George Clooney and Amal Alamuddins, who prefer to keep their nuptials as quiet and sophisticated as possible. And I have a feeling Heard and Depp fall into that category.

I'm pretty sure one day the couple is going to announce they've been married all along, and we'll have been none the wiser. As long as there are pictures, I'm OK with it.