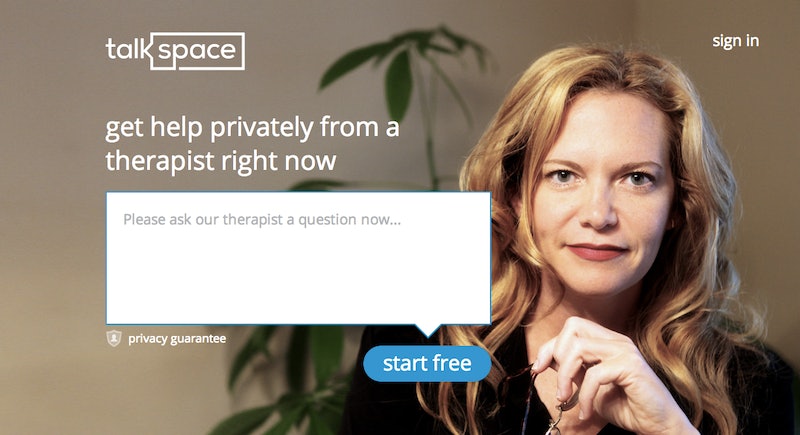 I'm not being hyperbolic when I say that therapy saved my life. When I was 24 and a total trainwreck — frequently drunk, often disorderly, idly suicidal, and about 30 minutes late everywhere I went — I picked Victoria's name out at random of a list of therapists who specialized in treating women, and showed up for an introductory appointment with her, prepared to feel bored and never go back. Eight years later, Victoria had molded me into a semi-upstanding member of society; a real grown-ass woman who had fought her demons, stared into her internal abyss, and learned that if you're more than 10 minutes late anywhere, you need a really good excuse. Victoria had been like a second mother to me — a mother I had to pay by the hour, of course, but a much better mother than the one I had gotten for free.

And yet, despite all the ways that she had helped me, I began to wonder if it was time to leave the nest. In August, I left her a voicemail, canceling our next session, and then never returned any of the subsequent messages she left me.

Trying to fill the void, I immersed myself in the world of online support groups. I subscribed to half a dozen — chat rooms for people with family members with borderline personality disorder, Reddit's thread devoted to the children of narcissistic parents, self-guided programs for people with low self-esteem. I stuck with them a little while, then dropped in and out. It turned out I wasn't as good at directing my own life and my continued healing as I thought I was. But I was too nervous to call Victoria; I was not even sure what I would say. Therapy is a little like love — it's hard to admit when you've screwed up.

All this is to explain how, a month ago, I signed up for a text message therapist with the new service Talkspace. Talkspace is a therapy website that, rather than setting up appointments for Skype or chat sessions, lets you text your therapist whenever you feel so moved, in a never-ending exchange that looks like the ongoing iMessage chain you have with a friend from college. You're assigned a therapist who, also like your friend from college, gets back to you when they're able.

I was incredulous at the concept, but seduced by the ease, as well as the idea of a clean slate. No one at Talkspace would know me as the overwhelmed twenty-something who had been one gin & tonic away from becoming a cautionary tale. At Talkspace, I'd just be another young professional, seeking work-life balance in the face of my stressful yet satisfying career. I imagined Talkspace as a kind of Therapy Lite — a place where I could work things out, but still hold on to my secrets. Here's what actually happened.

Signing up, you're asked to describe what's leading you to seek therapy. I listed my issues (stress, sleeplessness, anxiety, family trouble), and got this message from the intake specialist:

Free of the facial expression or voice intonation that you'd get from interacting with a person, the intake specialist's words made me feel like I was talking to one of those chat robots they used to have for AIM. Oh, am I having some stressors and some difficulty? Ya think?

This set my bar low — I decided that web therapy was a goof, and that I would probably quit after a few days. But when I finally received a message from Celeste, my assigned therapist, I became curious. If nothing else, she definitely didn't sound like an AIM chat program:

She then explained to me how text-message therapy actually works:

Celeste was a cognitive behavioral therapist — the complete opposite of hardcore old-school talk therapist Victoria — and our getting-to-know you exchange quickly turned penetrating. It was a strange feeling, to get a push notification on my phone, like I would to let me know that I needed to update Google Maps, and instead, find this:

I looked at this message and was genuinely shocked — I had never thought of myself as a "yes" girl before, even though I had always said yes to anything anyone ever asked me to do. In person, I dressed myself up in so much smeary mascara, ironic detachment, and swear words, that no one had ever called my bluff before. But stripped of all my bad girl armor, my self stood alone in cyberspace, and it turned out that my self was a sad little girl who would do anything to make people like her.

I couldn't believe it. I emailed everyone I knew. I had had a revelation that had eluded me through years of talk therapy, in two days of text therapy.

Now totally sold on the concept, I jumped in gung ho, texting with Celeste throughout the day, bringing up every issue I had in my life. I couldn't say no! I was afraid that no one actually cared about me! I filled my every waking moment with work so I never had to be alone with my thoughts.

Every time Celeste answered, I'd have come up with three more unrelated life problems for her to take into account. But she handled it all gamely, pulling all my scattered concerns into big picture issues. She assigned me CBT worksheets. And she seemed to empathize with me like a peer — while Victoria had felt like a mother figure who held all the answers, Celeste seemed the same as me, or at least, the person I wanted to be: another young professional, seeking work-life balance in the face of my stressful yet satisfying career.

The only problem was, like those Google Maps updates, I could ignore Celeste's texts when I felt busy, or overwhelmed, or just adverse to analyzing the ways in which I was responsible for my own happiness. Which, it turned out, was a lot of the time. After my initial burst of enthusiasm for the project, my work hours changed, and I no longer felt like I could spend a solid hour of my day constructing the perfect text to convey my inner psychological turmoil to Celeste.

I hadn't realized that much of what I was paying for, when I was paying for traditional talk therapy, was the accountability — I was paying to have an appointment that I would get in trouble for ditching, paying to feel guilty for wasting someone's time if I didn't show up. Since there was no appointment with Celeste, and since I could erase those push notifications without even reading them (the messages direct you to the site, rather than show you the actual text of the message), I fell off the web therapy wagon almost as quickly as I started.

So what to do now? I had now ghosted on two therapists in two different formats in a matter of months. Did this mean that I no longer needed therapy, or that I definitely still needed therapy? After a weekend of silence on my part, I texted Celeste:

She wrote back right away:

"There are many options, we just need to find the one that works best for you." That seemed like a referendum on the whole experience. I wondered if this had all been easier for me when there were fewer options, when the only option I could find for myself was walking into an analyst's office and pouring out my entire soul.

Talkspace's motto is "Therapy for how we live today," and it might well be that — but I wondered how well it would work for people having serious problems, the kind I had once had. Could Talkspace still do the job? If I had gone into a chat room instead of Victoria's beige couch, would I be where I am now? Would I have dropped therapy, the way I did hobbies and various men and everything else during my trainwreck years? Would I have been able to be honest about my problems, the way I was after Victoria pried them out of me? Would I even be alive?

But her ability to go straight for the big things was what had made Victoria larger than life to me, what had made her both a savior and terrifying. I wasn't sure I had any big things I needed to talk about, right this second.

I knew what I had to do.

"Hey Victoria," I mumbled into her voicemail, as nervous as if I had never met her. "It's Gaby. Gaby Moss. Your old patient, uh, Gaby Moss. Um, I'm sorry I disappeared on you. If nothing else, I think I must owe you money, ha ha. But, um ... I didn't mean to do that. I'm sorry. When you get a chance, please call me back." I hung up, my stomach slightly dizzy.

This was what I had been avoiding over the past few months: feelings. Feeling any of my feelings. And with no push notifications on my phone or voicemails to return, I had nothing to do but sit with them, and wait.