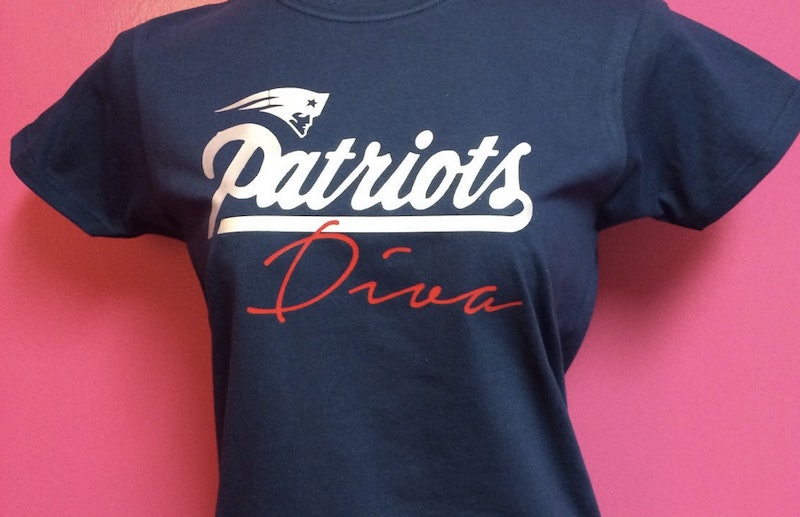 With the Super Bowl so close we can practically taste the nacho cheese, there's nothing left to do but get excited. Actually wait, there is plenty left to do. There is no such thing as too much booze or cheese-related products when it comes to a Super Bowl party, am I right? But also, you need the right Super Bowl gear to show off your team loyalty and undying love for America's most popular sport. There are some stellar jerseys and tees with word play and hilarious references to the infamous #DeflateGate, but there's also an abundance of weird, sexist, and just downright unexpected Super Bowl gear.

Now, I don't get offended easily, and of course, if something offends me, I always have the choice to not buy or wear it. However, when you come upon something that doesn't make sense in your brain, it's hard not to wonder: what was the point of this item being made? Among the jerseys and beanies and koozies is a product that's nothing at all like the others and just.... WHY? Who would buy it? What kind of message does this send to the people who see it? Does the person wearing it understand the subtle insanity they're encouraging? Without taking any of this too seriously, here are all the Super Bowl products available that had me scratching my head and thinking, DAFUQ?

Before I get accused of being too uptight about this one, allow me to point something out. Men's versions of football tees do not typically have any gender-specific titles or descriptions like this. You don't see "Patriots Bro" or "Seahawks Fella." That would be weird, wouldn't it? That's why this shirt is strange to me. Women don't need their professional sport fandom knocked down a peg by phrases like this.

To be fair, you can get a set of lingerie to show off your team pride no matter who it is you're rooting for. And while apparently this isn't an NFL-licensed product, it is made of NFL fabric! Literally just what any football fan could ever want. Going to go vomit now, brb.

Right, because if Samantha loves football, she has no other option than to become a cheerleader. Cheerleading is a rigorous sport, and I'm not trying to minimize the athletic ability required to participate in it. However, without other football-related options in attire for American Girl dolls (in this shop anyway), it feels like because they're girls, they need to wear skirts if they want in on the football action. And since little girls typically envision their own potential through the toys they play with and real and fictional influencers they follow, this seems very limiting.

Nothing offensive or sexist about this one. It was just an unfortunately lame response to the Patriots' "Suck Feattle" tees. Sorry, Seahawks fans. Their tees are just better than yours.

Cue frustrated growl, because REAL WOMEN know that every woman on this planet is a real woman and this "cute" t-shirt phrasing is all kinds of stupid and pointless. Super Bowl Sunday is a battle between two teams and two sets of loyal fans. Why does it need to be taken a step further by pitting "real women" against others? Just.... no.

6. Here for the Beer T-shirt

Well, at least you're being honest. Wear this to your party, and everyone will know exactly where your allegiances lie.

Honestly, it was only a matter of time before someone tried to monetize on Deflategate. And actually, this one is kinda funny...

Again, chances are you probably wouldn't see this kind of stuff being geared toward men. I don't know, you guys. I get the pun and all, but this one just creeps me out a little bit.

Wanna know what these are? They're Seahawks pasties, obviously. Your Super Bowl party just got way more fun/totally weird.