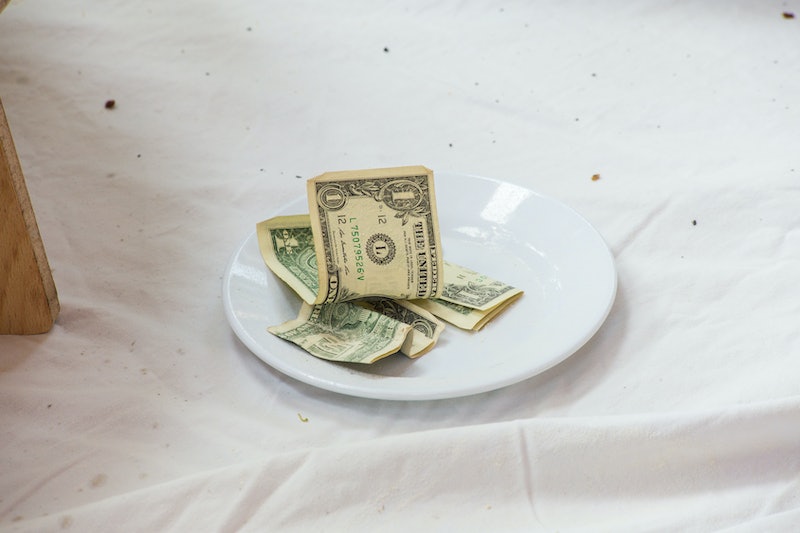 What would you do if I told you there was an app that figures out how much of a tip you should leave your server... based on their gender? That's what the tipping calculator app Toothpick does — it calculates tips such that women servers get tipped less than men. What? Surely not! That's insanity!... Or so it seems. Toothpick is actually a clever way to make a statement about gender inequality and the wage gap issue, making them impossible to ignore. Satire at its finest, no?

Designed to mimic the friendly, clean lines the official websites of most apps favor, Toothpick's home on the web proudly proclaims, "Women and men were NOT created equal. So why should they be tipped like they are?" It continues, "Meet Toothpick, a tip calculator that suggests a lower tip when your servier is a woman."

Does that sound weird to you? Don't worry; as Toothpick itself assures us, "It's OK because society says so." Here's how it works:

Since women on average earn 22 percent less than men, regardless as to the amount of work they do, then obviously it's up to us to make sure that our tips reflect that statistic. All you need to do is input your bill's total, tap what percentage you'd like to leave as a tip,and then select whether your server was a man or a woman. If you select "female," Toothpick will factor a gender deduction into your tip calculation, making sure you tip your lady servers less. So, if your bill comes out to $30, you want to tip 20 percent, and your server was a dude, it'll look like this:

Whereas if the circumstances are all the same except for the gender of your server (that is, a woman took your orders, brought your food, cleaned up after you, and so on), it'll look like this:

...In that incredibly not wonderful sort of way. Which, of course, is exactly the point.

Toothpick was created by developer Gabe Whaley and his four-person team Miscellaneous Mischief, a group whose goal is to "cause scenes on the Internet." Remember that Mile High Club app, Wingman? That was them. So was this horrifying GIF. But I would argue that Toothpick is their most ambitious project to date, largely because of the seriousness of the issue it tackles.

According to BuzzFeed, Whaley was inspired to create the app because the wage gap is "too lofty of a concept for many to grasp in its gritty, harsh reality." He continued, "All of a sudden, with a tip calculator that tells you to tip your server less just because she is a woman, you're forced to confront the issue first hand."

It's possible that some might find the description of the gender wage gap as "lofty" might be insulting to some, but it's definitely not to others — it's why it's so frequently ignored. Besides, Whaley's got a point. When you put serious issues in ridiculous contexts, it forces us to view them from a different perspective. This, in turn, inspires us to think differently about them in the grander scheme of things — and that's how change begins. This chain of events is precisely what Toothpick is hoping to accomplish for the wage gap: Since it's still not universally recognized as a problem, we need to accomplish that part of it — the acknowledgment of it — first. Then we can start fixing it.

When you scroll down past the jokes on Toothpick's website, it reveals its true intentions and asks users to take a stand for gender equality. "If you hate the idea of tipping someone less because of their gender, then you also hate the idea of gender inequality," it sensibly notes. It then points users to a Whitehouse.gov petition they've created to bring attention to the Equal Rights Amendment, an amendment to the Constitution that would guarantee equal rights for women... if it had ever been passed. First introduced in 1923 — 1923! — it stalled when it went to state legislatures for ratification in the '70s, and by 1982, it was all but dead. Nuts, right? Head on over here to sign the petition.

The beauty of an app is how easily it can be used to spread the word. So, if you know anyone who doesn't believe the wage gap is a thing, pull out Toothpick the next time you go out to eat with them. Act like it's perfectly normal. See how they respond. Then go from there. We're all in this together, so it's up to us to be the change we want to see.