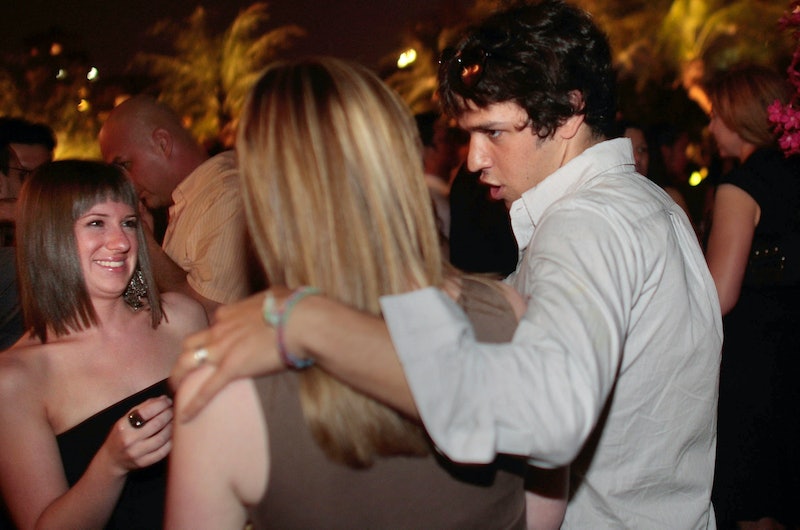 Looking for love on your phone is now completely mainstream: It seems every single person with an eye to a date is now on Tinder, Grindr, or some sort of dating app; spending their lunch hour squinting at blurry photos and wondering if Ohio isn't actually that far away for a hook-up. Technology and dating have never been so intertwined. Most dating apps don't give out their user numbers, but it's pretty clear that when couples are getting married in 10 years, their tearful wedding speeches will involve a thank-you to their iTunes Store.

But with so much competition, it's become trickier for dating apps to make their mark. Some apps have solved that problem by targeting specific interests (I'm pretty sure there's a dating app specifically for people who kayak), arranging a new slant on an older model, or using fancy graphics. Others, however, have tried to get your download just by being really, really weird.

Welcome to the world of weird dating apps. Enjoy your stay.

This one makes the list simply by being insulting. It's targeted at men who want to "make them an offer they can't refuse" — I'm not kidding, the app's tagline is from The Godfather. (Because every lady gets itchy for loving at the thought of a horse in her bed.)

The way it works? The man offers a 'carrot' — a gift, whether it's a piece of jewelry or an expensive book — and women, apparently, compete for the chance to date him, and grab the gift. It's basically bribery. Can we give this app the stick?

Anyone who has ever actually joined the mile high club will probably be realistic about the experience. Planes are noisy, cramped, filled with screaming children and hyper-vigilant stewardesses, and smell of industrial cleaning fluid. Prime sites for sexy hook-ups.

Unfortunately the fantasy persists, with an entire app, Wingman, based on the idea that two people on the same flight can identify each other, hook up — and then presumably sit awkwardly on different sides of cattle class until landing. More peanuts?

This is apparently aimed at dudes — again — who need a professional's touch to get their personal profile and conversational gambits on dating apps sorted, and are willing to pay for the privilege. And by pay, I mean up to $900 a month. Just for strangers to make you look cool online.

It's bad enough that companies need to hire social media consultants because nobody except the intern knows how to use Facebook, but the fact that we now need 'experts' to sell us on Tinder is actually rather sad. Just use the $900 to buy a nicely cut suit and some good books!

This one's by eHarmony, who really should know better. Bad Date Rescue poses as a 'friend' who can call you at a prearranged time to rescue you, with a lie about an "emergency."

This is Poor Dating Etiquette, guys, and it needs to stop. If you lack the cojones to tell your date that you don't feel a spark, and need the lame 'my mate has an emergency' tactic to get out of it (and believe me, the date will know it's a lie), you need communication lessons. Are we all teenagers?

Slydial lets you call the person you fancy, but makes sure the call goes straight to voicemail. Apparently, as a generation, we are now so freaked out by phone conversations that we require technological gambits to avoid them. Also, this is guaranteed to confuse your potential lover, who may well be staring right at their phone when you somehow manage to go straight to their answering machine. Try explaining that without looking like a weirdo.

The Simpsons ' declaration that "you can't make friends with salad" turns out not to be true. Well, sort of. This app, from the healthy restaurant chain, aims to help their customers hook up, which is actually very nice of them, if a little creepy. You publish what salads you love, your dietary restrictions, and when you're normally in your local Just Salad, and the store pairs you up. Romance isn't dead, it's just in the gluten-free section.

This one just seems impolite. It basically let you live-blog your date to friends or strangers, who can then give you advice — like commentators on a football game, except hopefully with less shouting.

For one, surely it's rude to stop paying attention to your date so you can give the app a play-by-play. For another, if your mates are anything like mine, all their advice is going to be either lewd suggestions or really bad puns. You can hook up with an "expert" for 99 cents, if by "expert" you mean algorithm.

Anyway, why don't they link you to somebody who's famously wise, like Oprah, or Judge Judy? Or at least a comedian? Come on, app developers. I'll be waiting for Dating With Kristen Wiig.