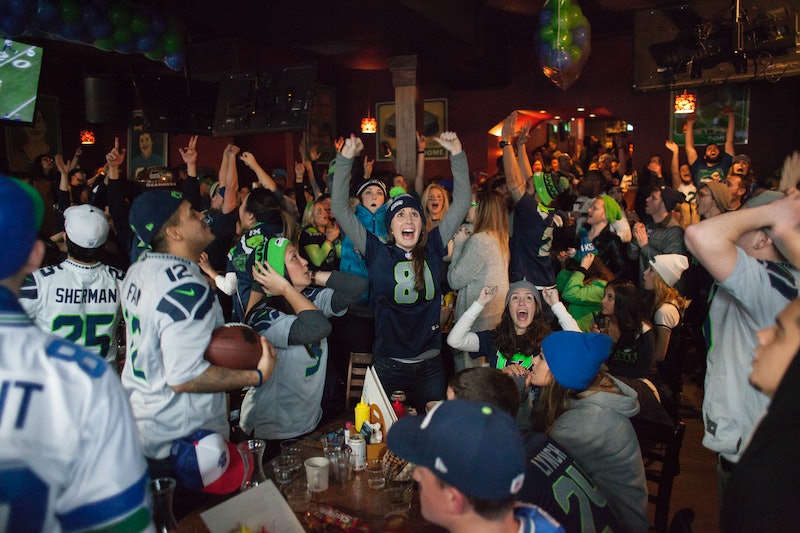 If you think Super Bowl Sunday is a total waste of time, you are not alone my friend. Compiled here is a list of things to do on Super Bowl Sunday besides watching the game, because not everyone feels like dressing up in team colors and screaming at the TV for three and a half hours. No, you're not totally unreasonable, unsocial, or boring — you're actually probably the most sane person on this day of all things football. I mean, there's only so long someone can stand watching grown men throw an inflated leather ball around a field for, and that deadline hit about 20 minutes into the season. Don't hate me football people, it's not you, it's me (but it's mostly the NFL).

The beauty of Super Bowl Sunday for non-Super Bowl loving humans is that it's not an actual holiday, so everything is still open, but it does have most people stuck to their living room sofas, so everything is empty. While you might think this is kind of a downer, think again. This means no lines, no waiting, no bumping into people, no nothing. Are you with me here?! You have your entire city to yourself, and that opportunity comes along once in a blue moon (or once a year at the end of football season). Forget the Seahawks. Forget the Patriots. Treat yo bad self.

1. Go to that one restaurant

You know the one I'm talking about — always crowded, impossible to get a reservation for, but supposedly, the best in town. As long as it's not a sports bar, chances are you can show up at the door and get a table for 10 without any wait time whatsoever. Restaurants are dead on Super Bowl Sunday, so take advantage of it.

2. See a movie in an empty theater

Doesn't it suck when you pay $14 bucks to go see a movie, $12 dollars on some over-buttered popcorn, and $4 dollars for a non-refillable soda only to enter a packed theater with no seats left except in the very first, neck-straining row? And how about when someone had the bright idea to bring their newborn to the screening? Guess what, with the big football game keeping families glued to their couches on Sunday, you may actually be able to score an entire theater (or most of one) to yourself during the Super Bowl.

3. Get out on the open road

Have you ever wanted to just get in your car and take a scenic drive... but then got three minutes into the usual weekend traffic and made a U-turn to head straight back home? Now's your opportunity to actually get on the open road and enjoy the freedom of it without a car in sight. The roads are yours, and so is the world.

Ice skating always sounds so romantic in theory, but when you actually get to the rink it's always packed with bodies. I'm talking kids hanging on to the sides, teenagers wrecking havoc on the ice, and groups of girls skating in horizontal rows of 10 that are sure to wipe out anyone who dares to cross their path. Why is it never like the movies? On Super Bowl Sunday, it will be — just you, your skates, and a whole lot of ice.

Photographers, charge up your camera batteries and clear your memory cards, because now is your time to shoot the hell out of any landscape anywhere. Have you always wanted that serene shot of a dead downtown main street? A still and beautiful park? An empty and footprint-less beach? Sunday is your day.

6. Do any kind of shopping except grocery shopping

Whether it's for some furniture, a car, or some cool new digs, Super Bowl Sunday is the time to hit up all of your favorite stores, and to do so peacefully. Forget waiting in line for dressing rooms and pushing through the aisles for that last size 7 pair of killer heels. You can actually browse at your leisure, get all the help you need from employees, and make it home without feeling totally defeated. One word of advice, however: avoid grocery stores like they're the plague, as they're sure to be filled with crazy party hosts ransacking the store for last minute ingredients.

So you don't want to actually watch the Super Bowl game, but you kind of committed to hosting the Super Bowl party. I get it, I really, really do. That's the thing about significant others, you have to compromise sometimes. Luckily, just because you're home doesn't mean you have to be watching television — in fact, why not spend your time trying out those crazy Pinterest recipes you've been holding onto for the past three years? If there was ever a time to make elaborate finger foods that you don't want to go to waste, it's today. And your guests will love you for it.