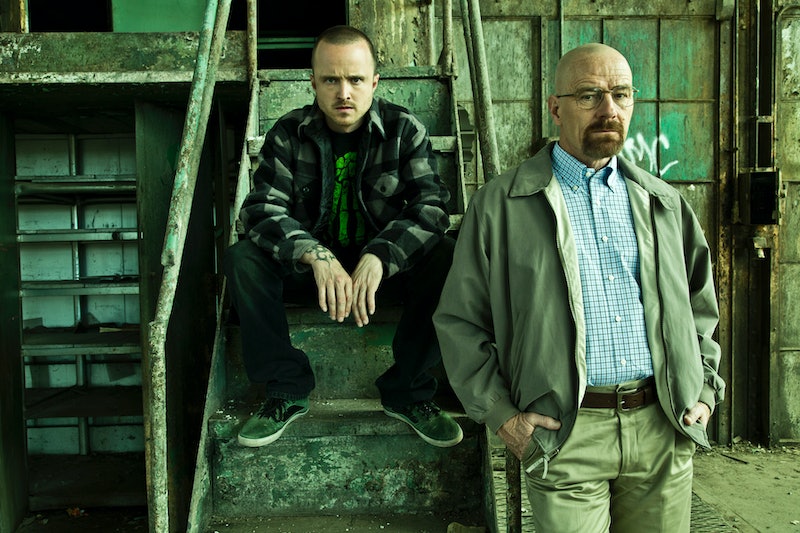 It’s been three days and we’re still talking about Breaking Bad’s ending and all the possible ways our eyes may have deceived us. Some people argue that we can’t be certain whether Walt died or not because we didn’t see him uttering “thus, with a bullet, I die” like a less romantic Romeo. Others offer more thoughtful suggestions, like Emily Nussbaum of The New Yorker, who suggested that the series finale was perhaps “too subtle” and that the episode’s action served as Walt’s fantasy, while his real end came at the hands of the police surrounding his snow-covered escape vehicle in the first moments of “Felina.”

But the conversation doesn’t seem to be fizzling: Wednesday morning, comedian Norm MacDonald jumped on the Nussbaum bandwagon, albeit with a far less articulate argument, and here we are, talking about it once more. I’ve had no less than five thorough discussions a day about “Felina” since Sunday — even when I’m supposed to be writing about some far lighter sitcom or a ridiculous celebrity trend. The theories, gripes, and exasperated interpretations are ceaseless, but we should have expected that.

Still, the show’s creator and the architect behind the series finale, Vince Gilligan, asserted during the TV therapy session we call Talking Bad that Walt died in the meth lab, Jesse was free, and that the last hour of Walter White’s journey was a definitive end. That’s it. That’s all they wrote, but that doesn't mean the rest of us are done with it.

And that’s because we’ve been trained not to let sleeping meth king pins lie.

Unless you’ve missed the last three years, you should know by now that we’re supposed to be in a “Golden Age of Television.” Stories are getting better, deeper, more complex and as a result, television is more compelling than ever. But with these golden geese we call TV shows come a higher expectation of the viewers sitting at home in front of their televisions and miscellaneous Netflix delivery devices. It’s no longer enough to sit idly in front of a screen while characters spoon-feed us the action and subsequent revelations.

Hell, I can’t even bring myself to fold my laundry or paint my nails while watching shows like Breaking Bad or House of Cards, because like each sentence of a well-written book, every moment is meaningful. Every whisper is important. Every glace holds a bounty of understanding. We’re entrusted to interpret facial tics, sighs, camera angles, tones, and (thanks to Breaking Bad) the ubiquitous presence or noticeable lack of purple garments. There’s a reason high brow publications like The New Yorker had to pony up and get themselves a television critic: TV is irrefutably a great purveyor of artful storytelling and it deserves every ounce of our mindful attention.

Sure, like film and literature, television is no stranger to schlock — mountains of mindless reality shows, glossy and bland sitcoms, and vapid dramas abound, but even literature has to deal with the fact that the word “books” includes drug store romance novels and D-List celebrity tell-alls. The fact is, television has the ability to produce high art worthy of thoughtful, ardent discussion and an almost academic level of interpretation. It’s not just a matter of reading expressions on the faces of the Don Drapers and Skyler Whites or reading between the lines — that’s just good comprehension.

We’re now willing — and expected — to go further. We now offer up close readings, often eschewing the intents of even the most exalted television writers for the meaning contained in the episodes themselves, which are entities we allow to exist autonomously from their creators. Once an episode of television is released, it’s certainly interesting to hear what the writer thinks he created, but the product is separated from its creator, forced to face us without protection.

That’s why no matter how many times Gilligan explains the finale to Entertainment Weekly, saying that he and the writers determined it was important to have Walt at least try to “begin to make amends for his life and for all the sadness and misery wrought upon his family and his friends,” we will continue to debate just how accurate that is. Nussbaum (and yes, Norm MacDonald) have chosen to believe that Walt’s ability to frolic openly around New Mexico without getting caught (unless you count the fact that Neighbor Carol calls the cops after Walt makes her drop all her oranges) signals that despite Gilligan’s intents, the episode serves as a fantasy sequence, letting Walt get the improbable closure he doesn’t truly deserve.

Gilligan may assert that “Walt is never going to redeem himself. He’s just too far down the road to damnation,” but that won’t stop critics like Willa Paskin at Slate from suggesting that “Walt was rewarded” by the finale and pointing out the Breaking Bad writers themselves as Team Walt apologists. Gilligan and his fellow talented dramatic showrunners and writers have made this bed, and now we all have to lie in it.

But it’s not so bad here. We may not all agree. We may, on occasion, write or speak passionately against one another’s opinions — I, for one, read the finale as Walt thinking he’d come full circle, while the rest of us scoffed, like Jesse, who quickly glanced at Walt’s gunshot wound and subsequently refused to participate in his redemption charade. Many critics I both respect and read religiously may disagree — and that’s a beautiful thing. That keeps the discussion alive and it keeps Breaking Bad alive, like so many classic and beloved works of film and literature.

Yes, TV has kept us chattering away for eons. I knew about who killed JR before I ever saw a dusty old episode of Dallas; I still debate whether or not Lindsay Weir should have gone on tour with the Grateful Dead at the end of Freaks and Geeks; and I will never cease to enter an argument about LOST’s regrettable series finale.

But Breaking Bad has brought discussion to a new level. It’s legitimized television debate in a way no series before it managed to. It engages minds on all levels, from the most well-educated writers to the silliest dudebros on Reddit. It’s no longer fanatical or insane to have an hour-long debate or write a 2,000 word treatise about what amounts to an actor in a costume on a small screen.

So instead of groaning over the fact that Breaking Bad continues to be at the center of social and critical discourse, it’s time to accept it. The deafening roar will quiet down eventually, but the conversation about one of the greatest television program in history will never die out. We’ve been given a complicated, delicately-crafted gift that demands high cognitive participation, and laying our working minds on the meth lab floor next to Walt’s lifeless body is not an option.

More like this
“The Door Is Always Open” For Another 'Breaking Bad' Spin-Off, Says AMC Boss
By El Hunt
Emilia Clarke Shares More Details About The New 'Game Of Thrones' Series
By Maxine Harrison
'Stranger Things' Fans Are Begging For Steve To Live For The Funniest Reasons
By Grace Wehniainen
'Criminal Record' Is The 'Doctor Who' Reunion We’ve All Been Waiting For
By El Hunt
Get Even More From Bustle — Sign Up For The Newsletter