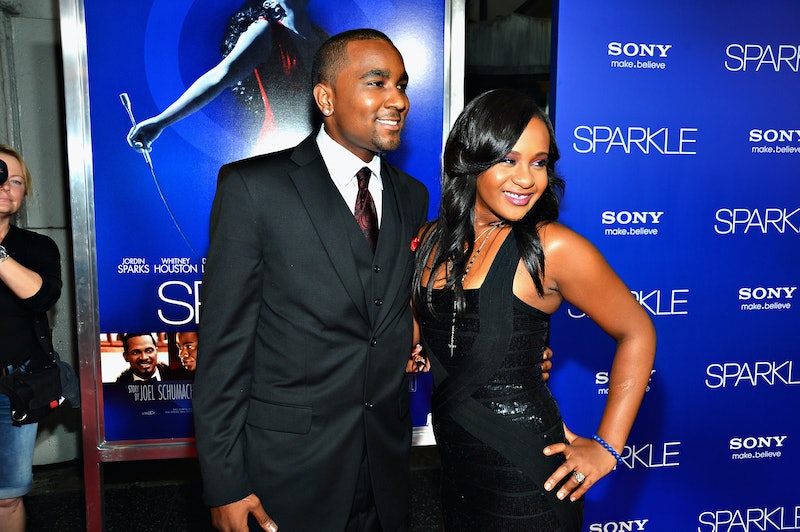 As previously reported earlier, Bobbi Kristina Brown was rushed to a Georgia-area hospital Saturday morning after her husband, Nick Gordon, and a friend found her unresponsive and unconscious in a bathtub at her Roswell, Georgia home. Thankfully, doctors are said to have stabilized Brown's breathing and she's currently recovering in the ICU — but this is still absolutely shocking news to hear, especially considering we're only a few weeks away from the three-year anniversary of Whitney Houston's death on Feb. 11, 2012.

Sadly, the circumstances of the shocking incident remain unclear at this point — a police spokeswoman did release a statement regarding today's events, but only revealed that police were still on scene at Brown's home to investigate the matter — but, at the very least, it's comforting to hear that Brown is stable and responsive.

Though it's difficult news to process for fans of both Brown and Houston alike, there are small ways fans can help to find at least a small amount of hope in light of this news: For instance, by taking a look over Brown's Twitter, it's pretty clear that she herself is a person who always makes efforts to be positive and optimistic, even in the darkest of situations. Considering the amount she's been through in her life, this is great to see — especially at a time like this. Here are just a few:

Hopefully, Brown will continue to make a full and speedy recovery.

More like this
7 Things We Learned From Rebekah Vardy's First Post-WAGatha Christie Interview
By Sam Ramsden
What We Know About Where Caroline Watt Is Now
By Catharina Cheung
Gassed Up Promises All Things Action, Risk, & Redemption
By Frances Stewart
The Lionesses Are Calling For Equal Access To Football In Schools
By Sophie McEvoy
Get Even More From Bustle — Sign Up For The Newsletter