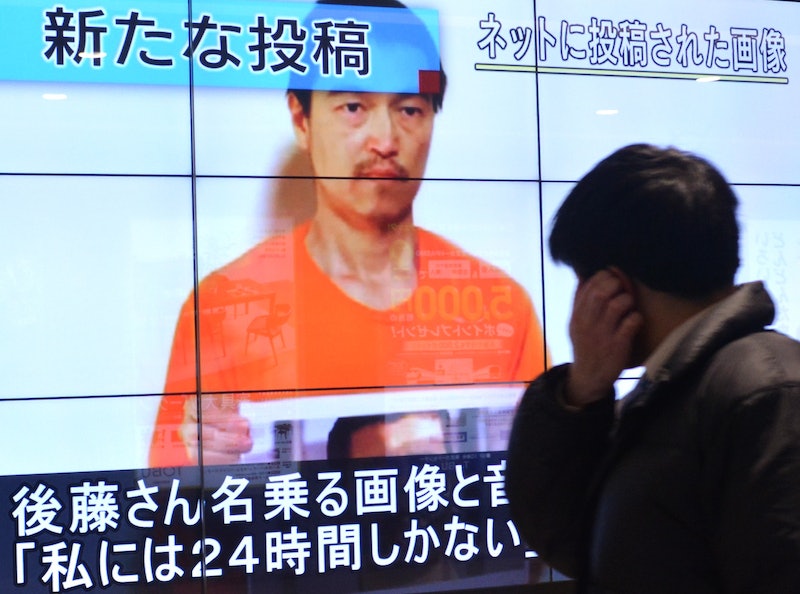 Japan awoke Sunday morning to the tragic news of journalist Kenji Goto's purported execution, plunging the island nation into a state of national mourning. Despite years of maintaining distance and a sense of pacifism in international affairs, the Japanese people have now suddenly become intimately acquainted with the politics of loss, leaving the citizenry stricken, saddened and shocked. At an emergency cabinet meeting on Sunday following the graphic video's release, Japanese Prime Minister Shinzo Abe said, "The government has done everything in its power, but I cannot but feel the deepest regret. I am extremely angered by this immoral and despicable act or terrorism. I cannot help but feel extreme regret by the result. We will never forgive the terrorists."

Goto's 78-year-old mother, Junko Ishido, who previously made a heartbroken plea for her son's life, delivered her prepared statement in heartbroken anguish. "Kenji has passed away. I am at a loss for words, facing such a regretful death,” she said from her home in Koganei. "The only thing I can do now is to shed tears of deep sorrow." But despite her devastation, Ishido maintained a sense of calm and warned the Japanese people against retaliation and hatred. She continued, "I strongly hope we can hand down Kenji’s wish of creating a society without war and saving children’s lives from war and poverty," contributing to the memory of her 47-year-old son's work as a freelance journalist.

Goto's elder brother, Junichi Goto, echoed his mother's sentiments, thanking the Japanese government and the Japanese people for their continued support. Speaking with NHK, the 55-year-old said, "As a brother, I had hoped Kenji would come back safe and thank everyone himself, so this is extremely regrettable. I am proud of the work he has done in the past, but I think the action he took this time was indiscreet." This is likely a reference to the notion that Goto traveled to the dangerous, war-torn area in hopes of rescuing Haruna Yukawa, who was executed earlier this month, and shedding more light on the dangerous situation in Syria and the Middle East. Junichi Goto added, "The Islamic State group has been showing off its power and expanding its influence by taking away the lives of my brother and many other people. Such actions are anti-social and unacceptable."

World leaders have also joined forces to unilaterally condemn yet another act of brazen inhumanity by ISIS, with President Obama released a statement in which he said, "The United States condemns the heinous murder of Japanese citizen and journalist Kenji Goto by the terrorist group ISIL (IS). Through his reporting, Mr. Goto courageously sought to convey the plight of the Syrian people to the outside world."

British Prime Minister David Cameron offered his support, saying "I utterly condemn what appears to be the despicable and appalling murder of Kenji Goto. It is a further reminder that ISIL is the embodiment of evil, with no regard for human life," while French President Francois Hollande noted that his administration "resolutely condemned the brutal murder of Japanese citizen Kenji Goto by Daesh (IS). France stands in solidarity with Japan in this new ordeal."

Australian Prime Minister Tony Abbot, whose own country was recently rocked by a hostage situation with apparent connections to ISIS, lamented, "If true, this will be a terrible shock for the people of Japan, an unspeakable horror for the family and this just demonstrates how important it is that all countries do what they reasonably can to disrupt and degrade this death cult which has ushered in a new dark age over parts of the Middle East."

Goto's death has sparked heartbreak and outrage amongst people across the world, leaders and private citizens alike. Taku Nishimae, a filmmaker living in New York, created a Facebook page following the release of the first ISIS video last month, which has already tens of thousands of "likes," comments and posts that demonstrate the international scope and impact of Goto's story. Nishimae wrote, "Kenji lives on — in all our hearts. In our daily work. Every time you smile with those around you, you will be sure to remember that big smile Kenji always gave us."

Mark Tchelistcheff, a friend of Goto's, said, "Our hearts are very heavy with this news," and it seems that the entire country has been shaken to its core by the sudden nearness of the situation. In interviews conducted by the Associated Press in Japan immediately following the release of the news, the Japanese people expressed deep concerns about the nation's security. "It could have happened to anyone. I am terrified. Maybe an attack could happen even here," said 51-year-old Tomoko Ogino, who works in cosmetics in Tokyo. 66-year-old Hiroyuki Sakai, a cab driver maintained similar concerns, saying "It is horrible. It is crazy. The Islamic State is just a criminal organization, not even a real country."

Some blamed the Japanese government for not acting quickly enough and cooperating with ISIS' demands, as one man told the AP: "They should have paid the ransom. This is about human life, and that comes first and foremost. We had to save his life. I want our country to first value human life. The fight against terrorism comes second." Terrorist negotiations, however, have been condemned by the Japanese government, as well as most western administrations, including those of President Obama and Prime Minister Cameron.

Now, however, the Japanese government is debating rescue operations, which would mark a distinct departure from their traditional, pacifist response. Still, the administration is not yet sure if they have the capacity or the capability to carry out such missions. But even if these operations prove unsuccessful, they have opened the door for debate surrounding self-defense as whole. Sophia University professor Koichi Nakano told Reuters, "It (rescue missions) is not realistic. But they will use it as an entry point to push the debate on collective self-defense more broadly."