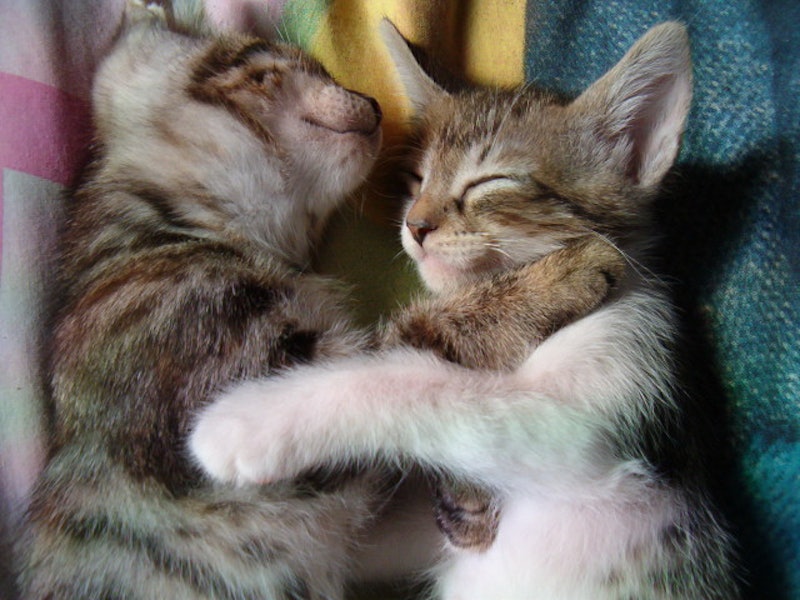 If your plans for this Valentine's Day mostly involve Netflix, your bed, and possibly a cat while lamenting the lack of people in your life with whom you can cuddle, then stop what you're doing right now and book a flight to Portland, site of the world's first Cuddle Con. You read that right: there's a high enough demand for platonic cuddling that A.) Portland resident Samantha Hess can make a living as a "professional cuddler," and B) she's hosting the world's first and only Cuddle Con this Valentine's Day. There's no word yet on whether this is actually an elaborate promotion for an episode of Portlandia, but I have my suspicions.

Dedicated to "providing unconditional love and acceptance to all in the Pacific Northwest," Cuddle Con is a 12-hour event preceding a local Valentine's Day dance, Mashable reports. Its location, local event venue the Bossanova Ballroom, already puts it a huge step above other conventions, and unlike what you're probably imagining, it's not just an hours-long cuddling session with hundreds of sweaty, possibly-unwashed strangers. Hess arranged various activities throughout the event, from couples massage classes to pillow fights, although there is a two-and-a-half hour "snuggle party" planned. There's even a mandatory consent class, because according to Hess, the key to a good cuddle is communication. From Mashable:

"We want people to understand that baseline of touch and consent and communication. So, it's really giving people that basic foundation or platform to reach out in positive ways without having negative impacts on the people around them," Hess says.

If you're big on personal space, Cuddle Con probably sounds like a nightmarish situation, but judging from the success of Cuddle Up to Me, Hess' thriving business in which you pay $1 a minute for a cuddling session, more people are into the idea than you'd think. As for why she's hosting the event on Valentine's Day, a holiday in which you'd assume most people would be snuggling with their significant others, it turns out that she's mainly hosting the event for the benefit of us lonely, touch-starved singletons.

"Valentine's Day can be one of the most difficult days of the year for someone who doesn't have somebody special in their life," she says. "And there aren't a lot of options you can go to where you feel safe and comfortable and connected to the people around you on that day."

Put like that, a cuddling convention sounds a lot more appealing. In fact, whatever marketing Hess has going on is really working, because according to Mashable, "hundreds" of guests are expected to attend. It makes a lot more sense once you remember this is Portland we're talking about. This is the city where Trek in the Park is a thing. It's the stomping grounds of Brian Kidd, a.k.a. the Unipiper, who rides around the city on a unicycle playing flaming bagpipes, usually dressed as Darth Vader.

Let's face it, Cuddle Con is far from the weirdest thing to happen in Portland.