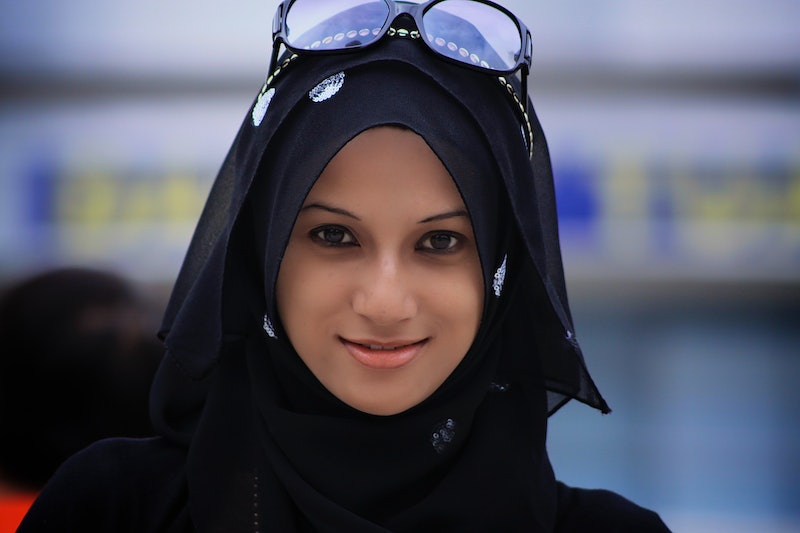 Yes, it's Super Bowl Sunday, but because the world revolves around more than just football — for instance, there are those ever-present matters of social justice, equality, and understanding of other religions — February 1 is an extremely important day for reasons that have nothing to do with either the Patriots, the Seahawks, or Katy Perry: It's World Hijab Day, a day that encourages global understanding and acceptance of the headscarves worn by Muslim women.

According to the movement's website, WorldHijabDay.com, the goal of this day is simple, yet three-fold: it seeks to raise better awareness, greater understanding, and lead to a more peaceful world. It's a day that recognizes the millions of Muslim women who choose to wear the hijab, and encourages religious tolerance by inviting women who don't wear the hijab to do so for one day and experience what it's like. Created in 2013 by Nazma Khan, a social activist from Bangladesh who moved to New York when she was 11, the idea is to foster communication by getting women to talk about why they wear the hijab, and to wipe away stigmas that have made the hijab such a controversial symbol to some.

Today, women around the world are putting on the headscarf as a sign of solidarity, and taking to social media to explain why they wear it. Khan's goal for the movement is to have it reach 10 million people in more than 140 different countries.

While it's encouraging to see so many women from so many different backgrounds working together to open up peaceful dialogue, the negative associations that still hang around the hijab — especially in Western culture — are still too terrifyingly real. Last year Womens E News reported the alarming details of one 2013 British study, which found that Muslim women — not men — were more likely to be the targets of Islamophobic attacks, and that these chances increased when women were wearing clothing associated with their religion.

Movements like World Hijab Day are a step in the right direction, but of course, they don't come without criticism. In the past, protesters of World Hijab Day have argued that it encourages women to treat the hijab like a costume that can be taken on and off at will, rather than a religious symbol. But others maintain that inviting non-Muslim women to wear the headscarf is an eye-opening way for them to experience what a Muslim woman goes through on a daily basis. Amara Majeed, the inspiring teenager who started The Hijab Project, a website that also encourages women of different faiths to try wearing the hijab in public, has called these types of experiences "extremely valuable."

And you know what? I'm guessing she's right. There's that terribly trite saying people tend to reach for at times like these, but only because it rings so true: You don't really know someone until you've walked a mile in their shoes. World Hijab Day is an opportunity for people of different beliefs to see what it's like from the other side, and to talk about it in a productive way on a global scale.

So this Super Bowl Sunday, before you settle into the couch with your wings and your nachos and your overabundance of team spirit, take a second to see what women of all faiths and belief systems are doing right now to keep the conversation going. There's still so much out there that needs to be said.