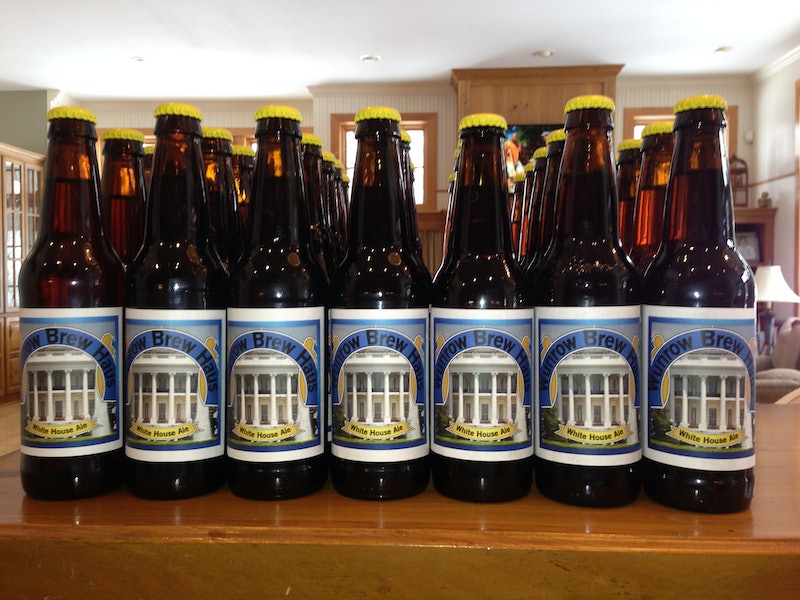 Back in February 2011, the White House played host to a Super Bowl party of 100 or so guests, providing a few different beverage options to quench their thirst. Steelers fans were able to select a Yuengling from Pennsylvania. Packers fans were able to select a pale ale, amber ale, or stout shipped all the way from Hinterland Brewing Co. in Green Bay, Wisconsin. And for those who preferred to remain neutral (and avoid awkward conversations with potential rivals), the White House presented its own concoction. The unique recipe has remained a fan favorite and White House staple each year during Super Bowl festivities ever since. So where, exactly, does one purchase their own bottle of the famed White House Honey Ale?

Unfortunately, it seems that President Obama and his advisers have kept the brew largely to themselves, as the ale was created and perfected by the White House kitchen geniuses, but that doesn't mean that you can't get a taste by rolling up your sleeves and putting in a little bit of hard work yourself. After a petition for the coveted recipe began circulating on We The People, the White House's online petitioning platform, then-Press Secretary Jay Carney announced that the White House would release instructions for the secret concoction to allow home-brewers the opportunity to recreate the "buzzed-about" beverage.

While you could simply follow the recipe itself (and potentially end up lighting the kitchen on fire), a few gracious companies have done most of the footwork for you. For around $50, you can purchase a White House Honey Ale or White House Honey Porter home-brewing kit from Northern Brewer (the kit also comes with an instructional DVD to walk you through the process, as well as any necessary supplies to create your own craft). Home-brewing and wine-making expert Midwest Supplies also offers its own version of the Honey Ale Kit for around $43. The only thing you need to supply? Bottles and fans.

The famed Honey Ale has certainly gained prominence over the past few years, thanks to its exclusivity — in 2012, homebrewer and salesman Brad Magerkurth had the opportunity to meet with Obama during a campaign stop in Iowa and was shocked when one of the president's aides retrieved a bottle of the famous brew and gifted it to him.

"I was pretty ecstatic ... for someone in the beer industry, it's about the coolest thing in the world," Magerkurth told the blog Obamafoodorama in an interview. But rather than keep the prized bottle for himself, Magerkurth decided to auction it off and do some good instead. In the end, the winning bidder paid $1,200 for the bottle and Magerkurth donated the funds to the University of Minnesota's Amplatz Children's Hospital.

If your purist heart is set on crafting your own home version of the Honey Ale without the assistance of pre-packaged kits or presidential aides, the White House has released the official Obama-approved recipe to guide you along.