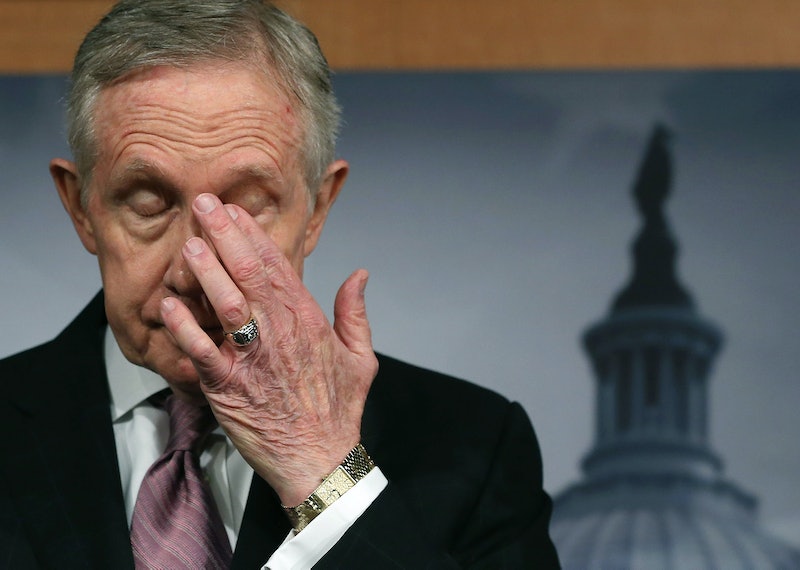 Looks like Senate GOP honchos were right: a government shutdown won't be worth the public opinion drop for the Republican Party. Seventy-two percent of Americans disapprove of the shutdown, a new CBS poll found, and the tactics don't even have the support of a clear majority of Republicans. The standoff shows no signs of letting up as we get closer and closer to the deadline to raise the debt ceiling.

The results of the poll are jarring, in part because 59 percent of those who disapprove of Obamacare — that is, the people who should be completely on board with efforts to stop it — also disapprove of shutting down the government. Figuring out why House GOP members won't kick this battle down the road boggles the mind.

Except, it doesn't. The New Yorker's Ryan Lizza rounded up a map of districts represented by the GOP's so-called "suicide caucus." Their actions, it turns out, are perfectly in line with what their districts elected them to do. "[T]hese eighty members represent an America where the population is getting whiter, where there are few major cities, where [President Barack] Obama lost the last election in a landslide, and where the Republican Party is becoming more dominant and more popular," Lizza wrote. "Meanwhile, in national politics, each of these trends is actually reversed."

As the shutdown enters its third day, the suicide caucus has to contend with the fact that Obama drew a hard line in the sand on Wednesday, saying that he will not negotiate with them until the government reopens. Across the board, federal agencies are saying that the shutdown is hurting everything from intelligence-gathering efforts to kids with cancer. Senate Majority Leader Harry Reid also rebuffed Republican attempts to fund individual parts of the government in what's known as a "piecemeal" approach. "The junior senator from Texas wants to fund everything else but Obamacare," he said, referring to Ted Cruz. "The government is closed and it’s closed because they've helped close it.”

Meanwhile, Wall Street is shaking in its dress shoes. There's still no light at the end of the tunnel for the government shutdown, and the country is careening towards a debt default on Oct. 17. That's the really bad news: economists estimate that if Congress doesn't raise the debt ceiling, the U.S. will only have enough money to operate for a few days. The U.S. dollar is already falling against the euro.

It's no surprise, then, that some have already started exploring options in the event that Congress can't get its act together. One idea — endorsed by former President Bill Clinton — is to see whether Obama can just order the government to keep borrowing. But White House Press Secretary Jay Carney said last year that "this administration does not believe that the 14th Amendment gives the president the power to ignore the debt ceiling — period.” (That could, of course, just be a tactic to force congressional leaders to act.)

In January, WonkBlog's Ezra Klein rounded up what would happen if we had hit the debt ceiling Feb. 15, when the government would have had to "default on about 40 percent of its obligations":

The choices it will face quickly become stark. It can cover interest on the debt, Social Security, Medicare, Medicaid, defense spending, education, food stamps and other low-income transfers, and a handful of other programs, but doing all that will mean defaulting on everything — really, everything — else. The FBI will shut down. The people responsible for tracking down loose nukes will lose their jobs. The prisons won't operate. The biomedical researchers won't be funded. The court system will close its doors. The tax refunds won't go out. The Federal Aviation Administration will go offline. The parks will close. Food safety inspections will cease.

It just doesn't seem like minting a $3 trillion coin could solve all that.