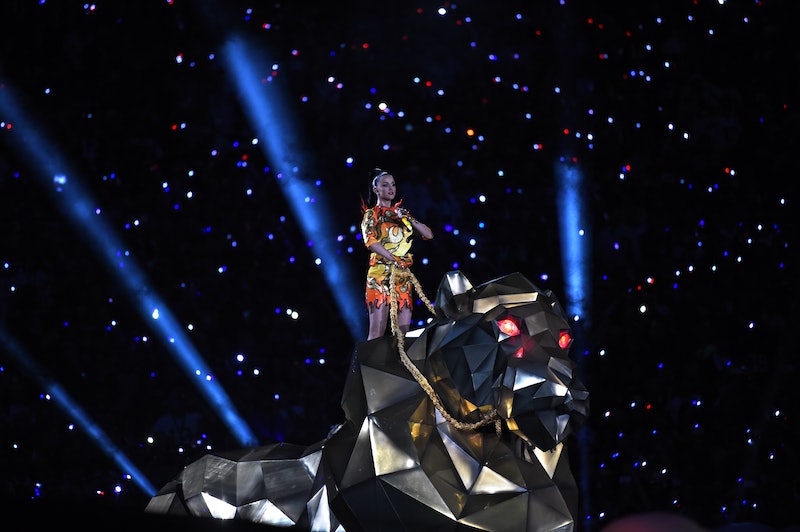 It pretty much goes without saying that Katy Perry's Super Bowl halftime performance was going to be surprising and amazing and shocking all at once — but, I can honestly say I didn't expect anything like this. And, with the fact that Lenny Kravitz and Missy Elliott were set to join Perry as special guests on the Super Bowl halftime stage, I was absolutely prepared for shock that wouldn't subside until, like, basically when next year's game airs in Februrary 2016.

Those of you who caught the performance likely know what I'm talking about at this point — but, for those of you who may have missed Perry's Super Bowl halftime show performance, I urge you to prepare yourself before looking down at the image below. Because, my dear readers...that is Katy Perry, during her halftime show performance at the 2015 Super Bowl, gliding over the stage on the "More You Know" star. (Well, to be fair, it may not actually be the "More You Know" star...but I'm choosing to believe it is because oh my God, just look at it.) She literally just created a meme from an already-existing meme, and it was beautiful.

In case you're not aware, The "More You Know" star originated from a series of Emmy award-winning PSAs that began running on NBC in 1989. I don't know about you, but I'm pretty sure the official PSAs need to make a glorious comeback on the network now — and with Katy Petty this time. Because this image? It's beautiful:

Pretty sure Katy Perry just won the Super Bowl. EVERYONE GO HOME, IT'S OVER.