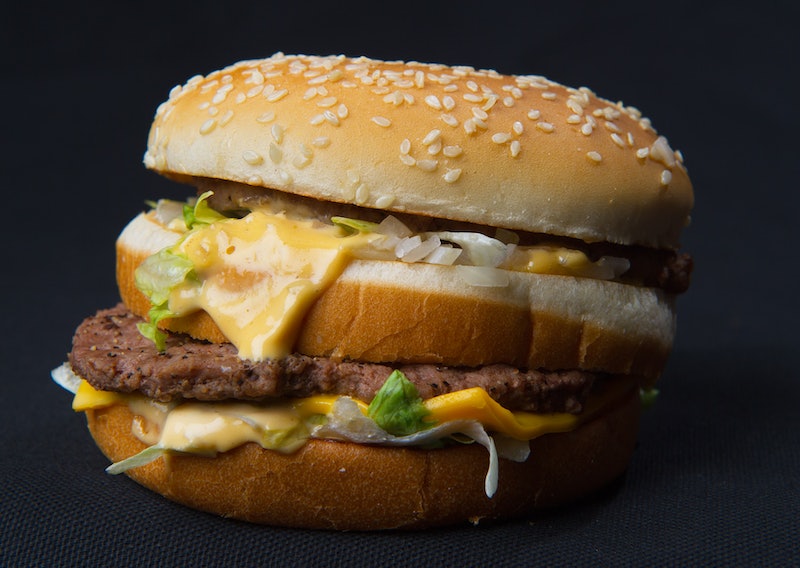 Another day, another weird McDonald's promotion. It's almost as if the fast-food chain is going through an awkward teenage phase, because it's been trying really hard to impress people lately. The latest attempt? McDonald's released the Big Mac sauce in a bottle in Australia, so residents there can now recreate the iconic burger at home. And for those who don't live in Australia, the chain has revealed the sauce's secret ingredients. Now, this is how you appeal to the masses — because who hasn't been dying to know what's in that orangey-yellow sauce since the first time they had a Big Mac?

For the month of February, McDonald's Australia will be selling 25ml bottles of the insanely addictive, tangy but creamy burger sauce at 920 of its stores at a steal — 50 cents a pop. There will only be 600 bottles available per store, so Australians should get on that as quickly as possible. In addition to the 25ml bottles being sold at stores, one 500ml bottle is being auctioned off on eBay to support the Ronald McDonald House Charities. Seeing that it's currently going for $23,000 AUD (about $18,000 USD), it's clear that people want to get their hands on this sauce.

If you don't live in Australia, however, you can still recreate the Big Mac at home because the usually secretive McDonald's is also revealing the sauce's ingredients for the first time. In recent years, food labeling laws have required the fast-food chain to list the ingredients in all of their items, but the ratios and amounts are still being kept secret. McDonald's is so protective of the Big Mac sauce's actual recipe that it makes the condiment off site and delivers it to locations in sealed containers.

But for those who are willing to experiment, you can now try to make your own with the unveiled ingredients (that is, if you have hydrolyzed protein and emulsifier handy).

Big Mac sauce is one of the most iconic McDonald’s ingredients and people often ask us where they can buy it, so we’re excited to be the first country in the world to offer tubs of Big Mac sauce to our customers. I know of people who love adding our special sauce to all types of food — from French Fries to McNuggets — so it’s going to be interesting to see what Aussies choose to add a spot of Big Mac sauce to over the next month.

Besides gifting the world with the prized Big Mac sauce, McDonald's has also rolled out a few recent campaigns that try — maybe a little too hard — to make the chain seem loveable. Using its "I'm Lovin' It" tagline, McDonald's revealed during the Super Bowl on Monday that, for a limited time, it would allow customers to "Pay With Lovin'." For example, customers will be asked to call loved ones to say "I love you" or hug their families as forms of payment for food items. While it's obviously a sweet concept, not everyone was buying the sentiment because, well, it's McDonald's.

And before that, the chain launched a creepy ad of McDonald's store signs reflecting on national crises and natural disasters as a way to emphasize how much the company cares about the community. This also didn't sit well with the public because many saw it as exploiting tragedy to sell burgers.

As McDonald's continues to try and rebrand itself and win back some lost love (and business) from customers, it looks like it's finally hit the mark with the Big Mac sauce. Let this be a sign, McDonald's. Stick to what you know best: insanely addictive fast food.