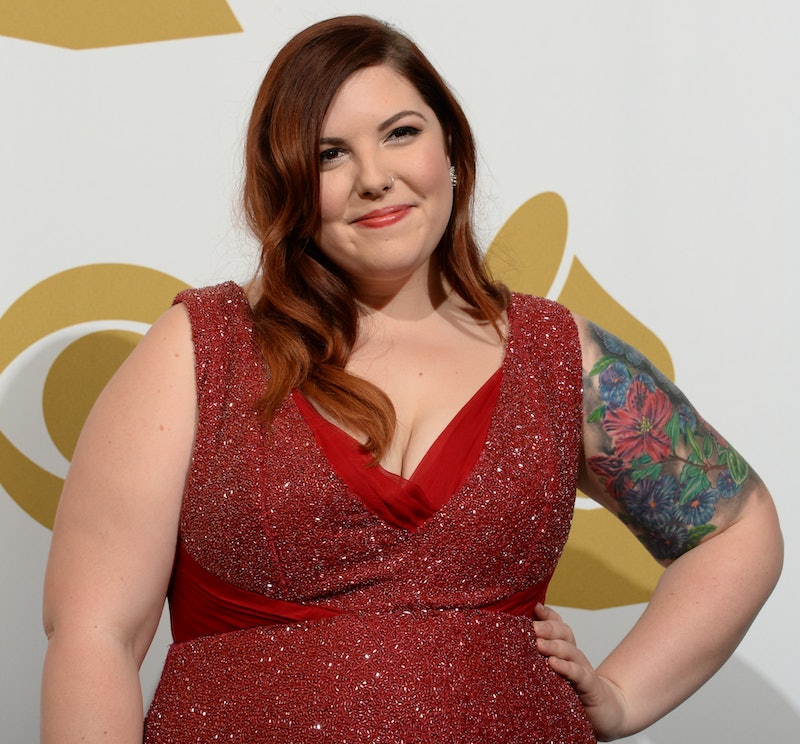 If you happen to be above a size 12, the chances are you've felt more than the average shopping anxiety and frustrations. As in more than trying to grapple with the difficulties of vanity sizing, strangely-fitting clothing, trying to decode what "one size fits all" means, and wondering if you only look cute because of a "skinny" mirror. Seriously, it can be downright impossible to find your size in stores. And singer Mary Lambert feels your pain. Well, she felt your pain before she fell in love with shopping. Want to know where Mary Lambert gets her clothes? The singer divulged the moment that changed her perspective on clothes-hunting and some of her favorite online shops on Who What Wear today.

While her stunning fashion of late and body-positive messages might make it seem like she's always been confident, Lambert says that she used to wear baggy, ill-fitting clothes as a sort of "punishment" for being bigger. "I think it does something to your psyche when the majority of clothing companies don't even acknowledge that you exist," she writes. She says the first time she walked into a plus-size store that wasn't for "hippie teachers or female ministers," her idea of what she was "allowed" to wear changed: "One of the cashiers, who was around my size, had on the cutest dress in the world, and she held up a red skirt to me and said, 'This would look SO good on you!'"

It's no surprise, then, that Lambert's love of shopping that this occasion inspired still hasn't waned. She has stunned on the various red carpets that she's graced — and that's all her own doing. Once shopping and dressing herself became a joy, she didn't want to give that up. Choosing to forgo a stylist, she dresses herself for red carpet events and even wore her own dress in her music video for her song "Secrets." Her gowns have even landed her on best-dressed lists, making those feats all the more impressive — because knowing your own body, and having a strong idea of what you like and where to get it as a plus-size woman, isn't as easy a feat as it may seem.

So where does Lambert go to get her flirtatious, feminine, slightly retro look? She names ModCloth, Rum + Coke, City Chic, and Tatyana as go-to's. When she needs to get glam for a red carpet, she turns to Rent the Runway for gorgeous dresses without the commitment of owning something with a huge price tag. I mean: Most celebs merely borrow couture gowns anyways, right? Genius.

Hearing about Lambert's struggles with "shopping while plus" had me feeling a lot of feelings. While I've never been thin and can't remember the last time I bought a straight-size that wasn't a 12, I was always able to shop in the straight-size sections of stores (except for button-ups because, boobs). Over the past year and a half, less and less straight-size clothing has been fitting like I'd like it to, however, and I had to deal with the fact that I might now be considered plus-size. Which seems like an easy thing to do but, as Lambert pointed out, there's a whole psychological aspect to it: The message that we're being excluded and that we're so different that our clothing requires a modifier is very real. The fact that most of the shops I frequented didn't carry plus-sizes, and that I now needed to go to new places or stores "just for fat girls," made me feel not only excluded, but stigmatized.

I lived in denial for a good couple of months, and waited until there were clothing items that I actually needed before even thinking about venturing into a specialty plus-size store. When I thought about having to leave the mall to just be able to clothe myself or not being able to shop at any of the local independent boutiques I loved so much, it felt unfair. It felt like I was being punished for going up a dress size — like I was being cast away to Fat Girl Island. As if I wasn't self conscious enough of my new tummy and softer arms, it was literally being pointed out to me each time I needed to or wanted to buy clothes. I picked over the Forever 21+ rack as often as I could for that first year, but everybody knows that a woman cannot dress in Forever 21 alone.

So I finally worked up the courage to do it. I was stopping by the book store in the strip mall next to the plus-size store near my house (that I actually now work at). A friend/boudoir photographer had just posted a PSA of sorts on her Facebook that the chain's other location was having a super steep sale on lingerie. Being the lover of frilly things that I am, I couldn't not peek in. You know, just to look. I felt a weird rush as I crossed the threshold. The colors were brighter, the clothes were cuter, and the employees were more stylish than I thought they'd be. There were even things I could see myself wearing.I didn't pick up any lingerie, or even stay in the store for more than five minutes, but I did remove that stigma of being seen at a "fat girl store." I got back in my car, vibrating with excitement (which felt dramatic, even for me): But I totally underestimated what it would feel like to be validated and seen. While I think all stores should carry plus sizes, I also understand the power of a store just for me: Where I can pick out anything I like, where the models look at least a little like me, and where the clothes are designed with curves like mine in mind. While I didn't stay in a fitting room for two hours or cry during my first time in a plus-size store like Mary Lambert did, there is no denying the power of feeling worthy and of giving ourselves the permission to feel beautiful. And to dress how we want, of course.