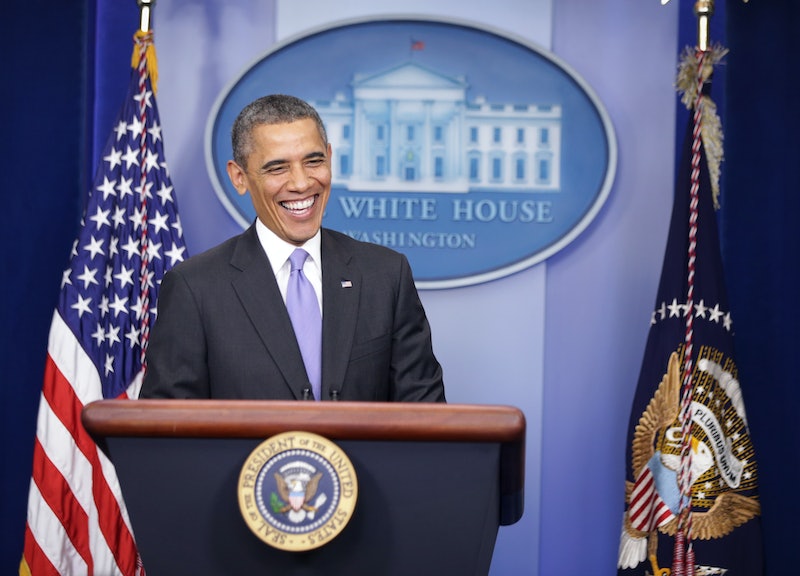 On Monday, President Barack Obama outlined his goals for a proposed $4 trillion budget for the fiscal 2016 year, and they are nothing short of lofty — and controversial. With the GOP now controlling both the House and the Senate, Obama is poised to aggravate at least one or two Republicans. Not only does he want to get rid of what he calls "mindless austerity," but Obama is taking this opportunity to advance his Robin Hood-esque agenda. With his 2016 budget plan, Obama wants to boost the middle class and tax the wealthy.

The new budget plan is chock-full of aspirations for Obama's last year in office. The President wants to give more funds to the Department of Homeland Security, help more students attend community college for free, and increase the child care tax credit. The budget proposes $3.99 trillion in spending, $3.53 trillion in revenue, and maintaining a $474 billion deficit. What's more, Obama says the budget is "fully paid for through a combination of smart spending cuts and tax reforms." That's a lot for one morning.

What Are Middle-Class Economics?

Obama said in his speech Monday morning that America is facing "fundamental choices to make about what kind of country we want to be." "Will we accept a kind where only a few of us do spectacularly well, or are we going to build an economy where everyone who works hard has a chance to get ahead?"

Well, it would be great to have the chance to get ahead. How do we get there? According to Obama and his new budget plan, the key is "middle-class economics," an invented term which he says was the "focus" of his State of the Union address. Middle-class economics is centered on the capitalist pillar-slash-fantasy that anyone who is willing to work hard can have a "fair shot" at building a successful life.

"The idea [is] that this country does best when everybody gets a fair shot, and everybody is doing their fair share, and everybody plays by the same set of rules," Obama said Monday. "The budget that Congress now has in its hands is built on those values."

So far, the values of middle-class economics are clear: equality and fairness, bolstered by Obama's plans to institute free community college, faster internet, and paid sick leave and childcare.

But what about the economics part?

"Being More Strategic" and #FundDHS

In 2016, Obama insists on ending sequestration and funding the Department of Homeland — and all in the name of the middle class, it seems. "We are being more strategic about how we handle our federal budget," Obama said. "So my budget will end sequestration and fully reverse the cuts to the priorities in 2016. And it will match the investments that were made domestically, dollar for dollar, with increases in our defense funding."

The President's passion for funding Homeland Security — #FundDHS — may seem to be coming out of the blue, but Obama says the importance of funding DHS rests on the "vital link" between national security and economic security.

I know there are Republicans who disagree with my approach, and I've said this before. If they have other ideas for how we can keep America safe, grow our economy, while helping middle-class families feel some sense of economic security, I welcome their ideas. But their numbers have to add up. And what we can't do is play politics with folks' economic security or with our national security.

Obama wants to make the country more secure as a whole — funding DHS and creating new markets for domestic products — so the people can feel more secure. It may seem hard to argue with that (rather vague) logic...

...But Republicans Will Probably Want to Argue With It

Even though Obama is trying not to alienate Republicans completely with the new budget, some Republicans are already calling Obama's 2016 budget plan "laughable." Speaker of the House John Boehner (R-Ohio) even referenced Groundhog Day in his condemnation of the budget.

"It may be Groundhog Day, but the American people can’t afford a repeat of the same old top-down policies of the past," Boehner said, according to Politico. "Like the president’s previous budgets, this plan never balances — ever."