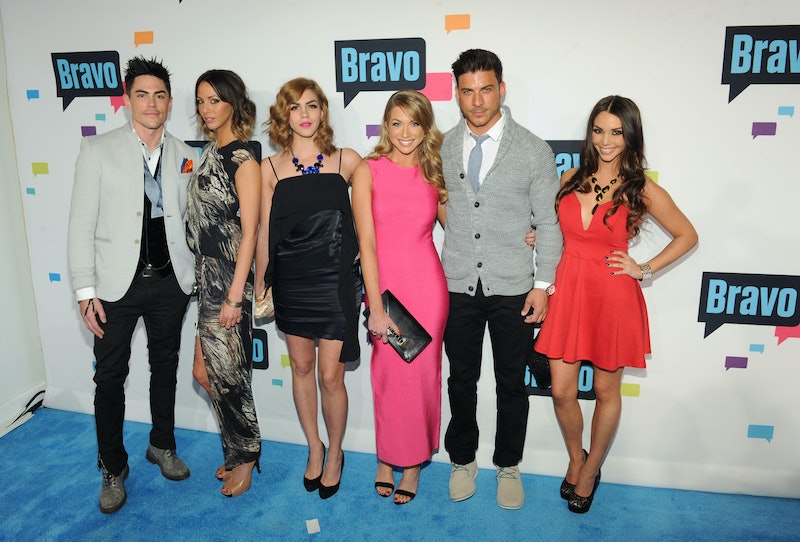 When watching certain reality shows, it's easy to lose sight of the concept of time. With a show like Vanderpump Rules for instance, it's difficult to remember that the oft-referenced Miami debacle (the centerpiece of this season's plot) happened kind of a while ago. With how frequently everyone talks about the Miami vacation, it always just seems like it happened last week. When did Vanderpump Rules stars Jax and Tom go to Miami? In order to put stuff in perspective, let's try to figure out exactly when the alleged Tomfoolery (pun intended) went down.

We know it went down before filming even commenced, given that no cameras were there to catch it. All we can rely on for a clear and unbiased account of the events of Miami are the not-so-clear, highly curated, drunken insta-photos of Jax Taylor as well as the Toms Sandoval and Schwartz. Let's just cross our fingers that none of these puppies are #latergrams.

I scrolled back through months of pictures on Jax, Tom, and Tom's insta-feeds (in Jax's case, many of these posts were inspirational quotes, but that's beside the point), and found that the Miami trip probably went down some time in mid-March of 2014. On March 7, Jax posted a picture, proclaiming in the caption that he, Sandoval, and Schwartz would be in Miami for the next four days. Huzzah!

With that pivotal piece of information, we can deduce that the Miami trip lasted from March 7 to March 11 of 2014. Now that we have those concrete dates in our minds, we can arrange all of the other building blocks into formation.

Tom and Ariana were already dating at the time that the Season 2 reunion special aired, which happened on February 2014. As Kristin is alleging, Tom definitely would have been cheating on Ariana at the time if he hooked up with someone else. That's matching up just fine.

Judging from Instagram, it looks like Jax and Carmen had officially DTR-ed at this point. At least if they hadn't DTR-ed, they were already at the "getting cozy" stage. Given that Annamarie Kunkel (aka "Miami Girl") alleged that Jax was hooking up with her friend, this creates a bit of a moral quandary.

Given that Schwartz was implicated in none of the alleged shenanigans, we can easily guess that he had a few Coronas and fell asleep on the night in question. My kinda dude.

We're also lucky enough to have a natural time stamp for the approximate time when this season's first episode was shot. Given that the histrionics of the Tom/James bar fight went down at Scheana's birthday party, and her birthday is on May 8.

So, if we're to assume that everything was shot and occurred in chronological order, it seems that the Miami debacle went down just shy of two months before filming started. This gave Kristen plenty of time to correspond with Miami Veela Annemarie to concoct a witches brew of intrigue, tears, and ambiguity. As the great sexy unique prophets of my favorite show on TV say, the truth will come out!!!

More like this
Chrishell Stause & G Flip Have “No Rules Or Regulations” In Their Relationship
By Brad Witter
The Bachelorette’s James Adds Another Weird Occupation To The Franchise
By Kadin Burnett
Yes, Luca Bish Really Doesn’t Drink Alcohol
By Shahed Ezaydi and Sophie McEvoy
'Love Island’s Latest Bombshell Has His Mind Set On One Girl In Particular
By Sophie McEvoy
Get Even More From Bustle — Sign Up For The Newsletter