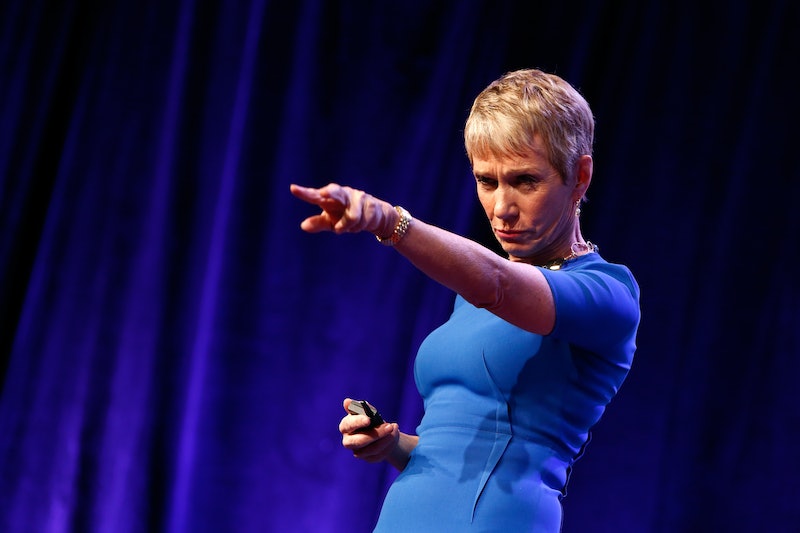 Corcoran wasn't born with a silver spoon in her mouth and an inheritance that would've let her dabble in anything and everything. Instead, her childhood in Edgewater, N.J. was a lot more modest. She was the second-oldest of 10 children, the Daily News reports. "As a child, Barbara slept in the girls' room with her six sisters while her brothers shared the boys' room," the paper writes. "Her parents slept on the living room couch."

And it's not like she was an amazing student, either. (On that, I have her beat.) She told Inc. that she did poorly in school and never talked in class. "I developed my gift of gab outside the classroom," she says. "I never spoke up in school, so I had all of these words I had to get out."

She Started Off As A Waitress

And not the ritzy kind, either, where you can make a ton in tips and be introduced to an important clientele. According to New York magazine, Corcoran was waitress at the Fort Lee Diner while maintaining her D average as a senior at St. Thomas Aquinas college. "It was new and unaccredited." she says of the college. "I didn't want to marry, have babies, and stay in Edgewater. The nuns thought I was nice. So they took me."

Even though it wasn't the place to see and be seen, Corcoran did meet someone important while working at the diner: Ramon Simone, who would become both her boyfriend and her first business partner when she decided she wanted to open a Manhattan real estate agency. "He gave her an initial $1,000 investment," Business Insider reports. "They split the company with Simone getting 51% and Corcoran getting the other 49%." The boyfriend did not stick around, but the business did. I wonder: If Corcoran looked back on that transaction from her seat on the Shark Tank panel, would she think it was a fair deal? In any case, it worked out well for her.

She Made Her Business A Fun Place To Work

Growing from that $1,000 seed money to one of the biggest real-estate firms in Manhattan took a keen business sense — and more. The Corcoran Group became known as a workplace with lots of bells, whistles, and perks. There were parties, in-office massages, and horse-show-style ribbon to recognize people's achievements, according to Entrepreneur. "I found the more fun I created in the company, the more creative and innovative it became," she told the magazine. "That was the big kahuna—the fun piece. That's what built that culture upside down and inside out. You got innovation. You got loyalty. You got people who would recruit for you." As I sit here writing this while working from home (alone), I still think I want to pin a ribbon on myself, even if there's no one to see it.

From that $1,000, the D-student waitress built a real estate empire (the first woman-owned one in NYC) that she sold for $66 million in 2001 — and now she gets to fund other businesses through Shark Tank. And that's why I want to follow in her footsteps. To the diner!

More like this
Howard Stern's Net Worth: Is He The Richest Man In Radio?
By Hugh McIntyre
Which RHODubai Housewife Has The Biggest Net Worth?
By Hugh McIntyre
Twitter Is Totally Divided Over Dami & Luca’s Behaviour
By Sophie McEvoy
Here’s What Happened To Every 'Love Island' UK Couple
By Orla Pentelow
Get Even More From Bustle — Sign Up For The Newsletter