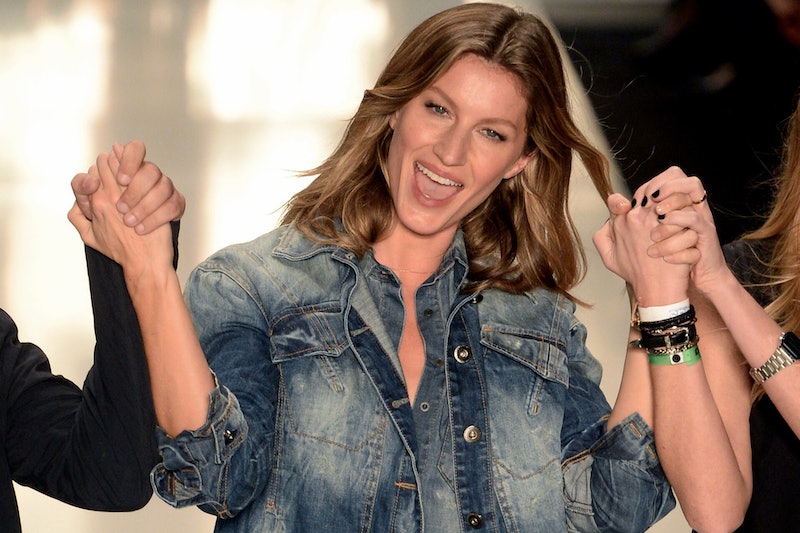 On Sunday night, while everyone else sat on the edge of their seats during the final moments of Super Bowl 49, all I could ask myself is one, repeated question: "WHERE IS GISELE?" By the time the Patriots and Bundchen's husband / QB Tom Brady finally won the game, I was more concerned with when the world's most famous supermodel would appear in all her glory than anything that was actually going on on the field. And for a second there I actually thought that Bundchen was so independently fabulous that she didn't even show up to Brady's "important" game, but alas — Instagram proved me wrong. I know, I know. It's adorable. But even though her husband was named MVP of the big game, Bundchen was been even more busy for the past month, apparently. Yup, Gisele Bundchen's British Vogue cover for March 2015 is here, and it's fabulous (no one is surprised).

In the issue, Bundchen talks about growing up, family, motherhood, and her sort of famous husband. Oh, and by the way, it's her 14th Vogue cover. Yes, fourteenth. The cover, photographed by Mario Testino (also, no big deal), features a tanned Bundchen in an unbuttoned blouse and sun-bleached hair.

So not only did Bundchen just most likely wrap up all the details surrounding the March issue, but she still found time to be Brady's number one fan at the big game — and in a plaid, simple button-down no less. The women is effortless.

In the March Vogue interview, Bundchen talks about how she knew Brady was "the one" right away and describes her parenting style. "When I say, I mean no," Bundchen said in reference to how she deals with her kids' whining when they want something. Bundchen as a parent sounds pretty badass, right? Again, no one is surprised.

The March issue as a whole seems to focus on Bundchen and all her many roles — a mother, a model, a wife, a successful career and business woman, a fashion icon. She is all at once a million different things, and seems to succeed at each role. So to those of you who still think a woman can't have it all, think again. And to those of you who think a woman can have it all, but has to sacrifice things in each category... think again as well. Bundchen is the definition of inspiring, and next month's British Vogue only emphasizes that. Tom Brady who?