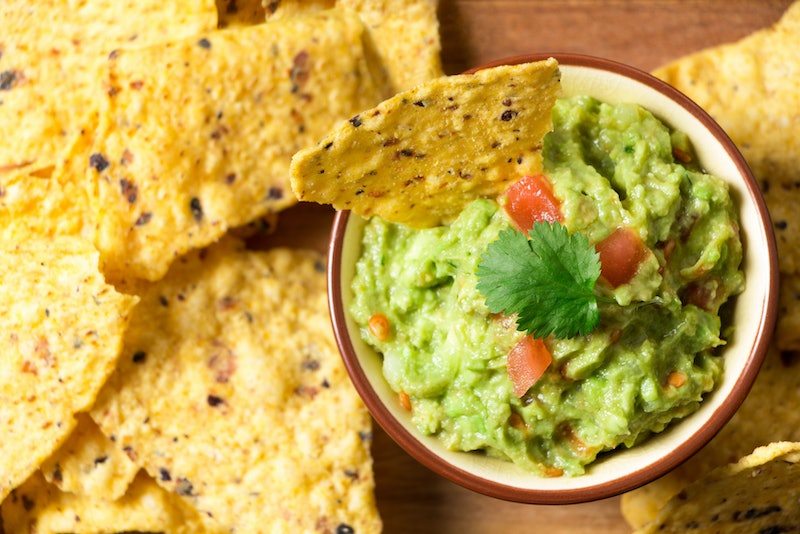 During a brief interview from the White House kitchen before Sunday night's Super Bowl, Today's Savannah Guthrie asked Obama a few tough questions. Why so much swagger at the State of the Union address? Why make proposals that have little to no chance of being approved by Congress? But the toughest-hitting question of the night, the one that gave our president pause, was: "Chicken wings or chips and guacamole?" After a moment of hesitation, Obama chose chips and guacamole over chicken wings, remembering that guac is the best edible thing on earth. We're totally with you, Obama.

Seeing that it was the night of the Super Bowl, of course Guthrie was going to take the opportunity to ask President Obama some football-related questions. Though Obama gave a diplomatic and neutral answer to which team he was supporting in the game — "I think it's always wise for me not to choose a team because then I just alienate one big city, but I will say that it's going to be close" — he certainly didn't beat around the bush when Guthrie asked which game-day food he preferred.

In a lightning round of the game Either/Or, Guthrie asked Obama to choose between basketball or football ("I’m still a basketball guy but I love football"), offense or defense ("Always offense"), Hillary Clinton or Joe Biden ("Love them both. Good try!"), and chicken wings or chips and guac. "Now that's tough," Obama replied. "I'm going to go with chips and guac. I’m a fanatic about guac."

In fact, the president is such a fanatic about guac that in July, Obama told the crowd at a kids' state dinner:

I lose my mind.

President Obama is clearly not alone in his affinity for the avocado treat. The Hass Avocado Board reported that during last year's Super Bowl between the Seattle Seahawks and the Denver Broncos, 104.2 million pounds of guacamole were consumed. That's enough guac to fill an entire football field 40.2 feet high. Why is the creamy green dip so wildly popular — and why is Obama correct in choosing them over wings? We have many reasons.