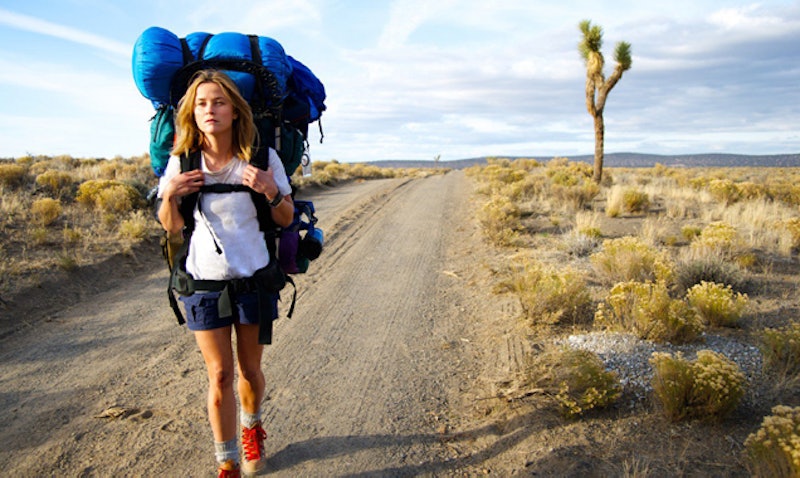 By now, it's likely you've heard a little bit about Cheryl Strayed. She hiked the 2,663 miles of the Pacific Crest Trail after losing her mom and getting divorced at 22 (NBD), and lived to tell the tale. She was the voice behind the wildly successful "Dear Sugar" column for The Rumpus. 2012's Wild: From Lost to Found on the Pacific Crest Trail was a New York Times Best Seller, and recently made the move to the big screen in an adaptation starring Reese Witherspoon.

Reading Wild will make you want to reinvent yourself. Discard everything that isn't absolutely vital and start over somewhere new. Hike a giant mountain. It will also make you ridiculously relieved that you're not doing any of those things. After all, it's the small changes that start us off, right? Right. In the meantime, we can read all about Cheryl Strayed's amazing adventures and learn everything there is to know about the PCT, backpacking, grief, life, love... and pretty much everything in between.

As it happens, Strayed is a pro at giving advice. Here are the essential lessons she (and now you!) learned from hiking the Pacific Crest Trail.

It's okay to be a little lost sometimes

“There's no way to know what makes one thing happen and not another. What leads to what. What destroys what. What causes what to flourish or die or take another course.”

“I knew that if I allowed fear to overtake me, my journey was doomed. Fear, to a great extent, is born of a story we tell ourselves, and so I chose to tell myself a different story from the one women are told. I decided I was safe. I was strong. I was brave. Nothing could vanquish me.”

Forgiving yourself is the first step toward moving on — from anything

Life isn't all that complicated, we make it that way

“That my complicated life could be made so simple was astounding.”

Some things are really just not meant to be

"The universe, I'd learned, was never, ever kidding. It would take whatever it wanted and it would never give it back.”

Getting away from everything you know is freeing

For better or worse, you have to be your own biggest fan

“Who is tougher than me? The answer was always the same, and even when I knew absolutely there was no way on this earth it was true, I said it anyway: No one.”

“I was amazed that what I needed to survive could be carried on my back. And, most surprising of all, that I could carry it.”

Sometimes books can solve problems of any size

“[Books] were the world I could lose myself in when the one I was actually living in became too lonely or harsh or difficult to bear.”

No matter what, always keep going

“I walked and I walked, my mind shifting into a primal gear that was void of anything but forward motion, and I walked until walking became unbearable, until I believed I couldn't walk even one more step. And then I ran.”

More like this
I Read Prince Harry's 'Spare' So You Don’t Have To: 11 Highlights To Know
By Marina Watts
'Mayfair Witches' Already Changed 2 Major Characters From The Books
By Grace Wehniainen
Prince Harry Incorrectly Recites Christina Aguilera’s “Genie In A Bottle” Lyrics
By Jake Viswanath
Allegra Goodman Procrastinates By Reading Time-Management Books
By Samantha Leach
Get Even More From Bustle — Sign Up For The Newsletter